Lord Ganesha and the Incidence of his Birth 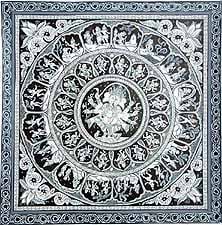 $140.00FREE Delivery
This item can be backordered
Time required to recreate this artwork
6 to 8 weeks
Advance to be paid now
$28.00 (20%)
Balance to be paid once product is ready
$112.00
Notify me when this item is available
Uma sutam shoka vinasha karkam
Namami vighneshvara padapanjakam.

The elephant headed Ganesha, the son of Uma, has been portrayed here in his Nratya Ganapati form. In Indian rituals Ganesha is worshipped in his thirty-two forms, the Nratya Ganapati being one of them, and is commemorated by over a thousand names. He has the same status as have the Trinity of Hindu gods, Shiva, Vishnu and Brahma. Lord Vishnu himself prescribed his agra puja, that is, his worship before all gods.

Ganesha enshrines the centre which along with the earth under his feet and the void behind symbolise the cosmos. He has eight hands and is in a posture of ecstatic dance. The bow-like held snake depicts his ecstasy. Ganesha combines in his form both human and animal factors and thus aptly represents the cosmos manifest in a deity form and the most accomplished form of the Divine. He has covered by his dance the entire space and the earth underneath which suggests, and the same reiterate many metaphysical treatises, that it is always the Divine presence, an act, mood or whatever, that pervades the cosmos which is but only its reflection. Numerous dancing figures in the ring around are suggestive only of this co-relationship between the universe and the Divine as the entirety seeks to reflect but in the Dance of the Divine.

The outer ring depicts the theme, the more popular legend related to the birth of Ganesh, which the artist, perhaps, intended to render. As has the legend, Parvati once, before bathing, playfully created a child's idol out of the waste of her upatana, the mineral paste used for cleansing the body, and as unmindfully cast it into the waters of holy river Ganges where she had gone for bath. After the idol had submerged into waters she felt that the child created out of her body was her own child and she should not have so thrown him. The bereaved Parvati burst into tears and beseeched mother Ganges to give her back her child. The compassionate mother Ganges, after putting life into the child, flinged him onto her waves and returned him to Parvati. This part of the legend has been portrayed in the compartment just on left to the top centre wherein enshrines the Shiva-lingam. Parvati is seen with the child in her lap beside the river Ganges.

After bath Parvati used to meditate. She asked Ganesha to keep the gate and not to allow anyone to enter the house. The two compartments next to above referred depict this part of the legend. A little after Lord Shiva came there. Ganesha, not knowing Shiva, did not permit him to enter. Shiva too did not know Ganesha. Hence, after hot arguments the enraged Shiva inclined to kill the obstinate child but intervened by two friends of Parvati, he spared him and sent two of his ganas to persuade Ganesha not to come in Shiva's way. Ganesha was however determined to obey but only his mother. Meanwhile Parvati's friends rushed to her and to avoid a mishap Mahamuni Narad to Shiva to persuade him, but nothing prevailed. The furious Shiva raised his trident and beheaded the child. Parvati reached there but only to let her child's torso fall into her lap. Aggrieved Parvati began moaning and accusing Shiva of killing her child. Shiva to appease Parvati sent his ganas to bring the head of the latest born baby, whomsoever it be. The ganas found a just born elephant baby. They dissected its head and brought it to their master Shiva who grafted it on the torso of Parvati's child and brought him back to life. Highly pleased with child's valour and loyalty Lord Shiva nominated him the commandant of his ganas and named him Ganesha, or Ganapati. Meanwhile there emerged Brahma, Vishnu, Indra and other gods. Vishnu and Indra worshipped Ganesha, and Brahma worshipped Shiva. The entire episode has been covered in the sixteen renderings.

This description by Prof. P.C. Jain and Dr. Daljeet. Prof. Jain specializes on the aesthetics of literature and is the author of numerous books on Indian art and culture. Dr. Daljeet is the curator of the Miniature Painting Gallery, National Museum, New Delhi.