The Lotus Goddess as Gajalakshmi 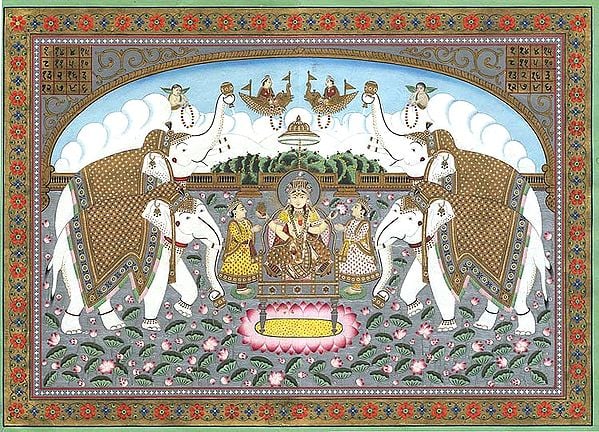 $455.00FREE Delivery
This item can be backordered
Time required to recreate this artwork
6 to 8 weeks
Advance to be paid now
$91.00 (20%)
Balance to be paid once product is ready
$364.00
Notify me when this item is available
This excellent miniature, measuring 39.5X 28.5 cm, rendered using a lot of gold, represents the Gajalakshmi form of the lotus goddess, the patron deity of riches, prosperity and fertility, and the consort of Lord Vishnu  sustainer of the universe. The dually auspicious Gajalakshmi represents in her being supreme good as also supreme beauty. Metaphysically, Lakshmi  or Mahalakshmi, transforming as Padmavati, Sri or Gajalakshmi, is one of the manifest forms of the primordial female energy, which is fertility and growth-oriented, generative, creative, sustaining and blissful.

The early Vedic literature is silent about Lakshmi, though the Atharva-Veda talks of the one who is possessed of large breasts with milk oozing from them. Atharva-Veda seems to allude to the Indus Mother goddess who with her similar large breasts, full of milk, represented fertility and generative energy. In visual arts, around the third century B. C., this large breasted goddess of fertility transformed into the lotus goddess with larger breasts, fully exposed genital organs and lotuses in hands and around. She had elephants flanking her but sometimes was also without them. She has been sculpted invariably as an independent divinity without a male partner, or male counterpart. Like the Mother Goddess, she was initially two-armed but subsequently her images began having four arms. This two and four armed iconography continued ever since  her votive images being four-armed, and aesthetic, two-armed. Later, the gender dominated Puranic literature transformed her into Vishnu's spouse assisting him in accomplishing his sustenance-related acts, or serving him personally. Puranas wove around her numerous legends in regard to her origin, forms, acts and aesthetic beauty, and hymns for her rituals. As for her origin, Puranas acclaimed her emergence from the ocean along with thirteen other jewels recovered during the churning of ocean. She emerged from its bosom riding a lotus.

This image of Lakshmi, with two pairs of celestial white elephants bathing her with milk, is popularly known as Gajalakshmi. Now with the primordial Mahalakshmi form being forgotten, the popular mind sometimes calls Gajalakshmi also as Mahalakshmi. Two of the four elephants are bathing the goddess by pouring on her milk from their pots of gold, and the other two are filling their pots with milk from the Kshirasagar  ocean of milk. The painting is an interesting as well as excellent blend of many elements. Basically this form  elephants bathing her and lotuses around, which give it its Gajalakshmi name, is a art perception which first revealed in the third century B. C. in the sculptures of Sanchi and Bharhut. But, in this painting, the number of elephants has been increased to four and they have been elevated from the ordinary ones to the celestial white elephants of Indra. The image proper is four-armed  an aspect of the initial Mahalakshmi iconography. The goddess has been installed on a golden throne laid over a huge lotus floating on the surface of the ocean of milk with myriad of lotuses blooming around  a perspective suggestive of her origin from the ocean-churning where she emerged riding a lotus.

Lavishly bejewelled, richly costumed and elegantly crowned four-armed goddess is carrying in her upper right hand a gold pot, in upper left, a full blooming lotus, and lower right is held in 'varada' and the lower left is raised in 'abhaya'. In the iconography of Lakshmi, the pot symbolizes the earth and the riches that the earth contains, and the lotus, growth, grace and beauty. The gesture of 'abhaya' imparts fearlessness and of 'varada' bliss and redemption. Paying homage to the goddess, on her sides stand Indra and perhaps, his son Jayanta. Behind the goddess, a beautifully designed gold railing demarcates the Kshirasagara from the land-part and the sky above. Major part of the sky is covered with curling white clouds, which a couple of flying angels rides. Above the clouds are two gods in their flying thrones. They all are carrying garlands in their hands. The earth part has been symbolised by a row of conventionalised tree motifs painted a great symmetry.

The painting is contained inside an elaborately rendered floral border. The upper edge, inside the border, has been arch-like curved with arch-ends negotiated with pendentives-type designing motifs. The corner spaces above the arch are covered with auspicious cubic graphics  'yantras' often included in the auspicious images of Mahalakshmi. Each of the graphics comprises sixteen cubes with numbers aggregating to thirty-four counted vertically or horizontally or across from one corner to other. Such 'yantras' make the image of Lakshmi, who bestows boons and dispenses sorrows, more auspicious.