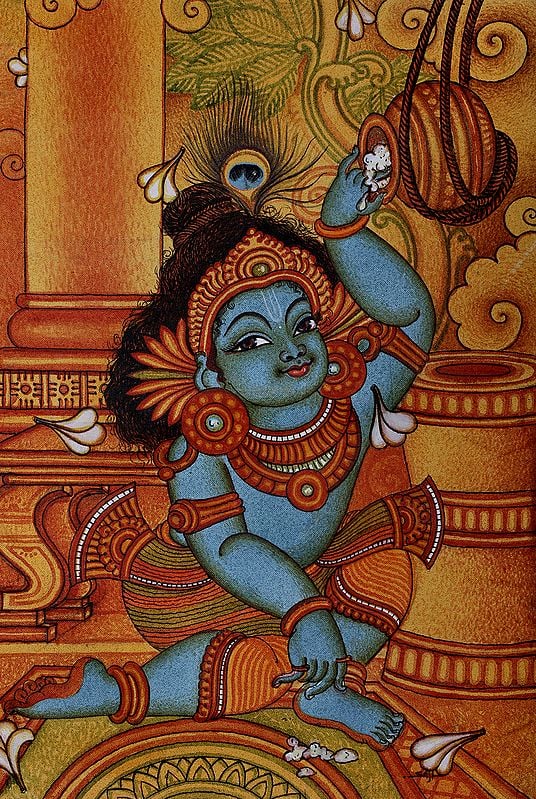 $255
FREE Delivery
Only 1 available
The baby Gopala is widely adored in Vrindavan. Child of Devaki-Vasudeva and son of Nanda-Yashoda, there is not a single young woman’s heart that the adorable boy-deity had not already stolen within days of His auspicious arrival at Vrindavan. And He had their feminine, maternal sensibilities at His command despite being a proficient thiever of makkhan. And is the boy to blame, when makkhan is the rich, buttery colloid that emerges from whole milk after it has been churned for hours together?

In the painting that you see on this page, the little one has stolen into the pantry of Mother Yashoda. The innocent mother had churned the milk, gathered all the makkhan in a clay pot, and hung it up with the help of some twine. Her baby, however, had managed with His tiny hands to slide the mouth of the pot towards Himself and is now tucking into the thick white elixir. The beauteous features of His childlike but wise face are laced with pleasure and triumph.

The dusky blue of that unmistakable complexion and the deep, alluring black of those eyes. A shock of dense black hair spreading over the shoulders behind a crown of gold and emerald. A short saffron-coloured dhoti and large karnakundalas complete the divine iconography. This richly coloured Lord Gopala composition is in keeping with the style of the Kerala mural, traditional Indian frescoes found in ancient cave temples and palaces. 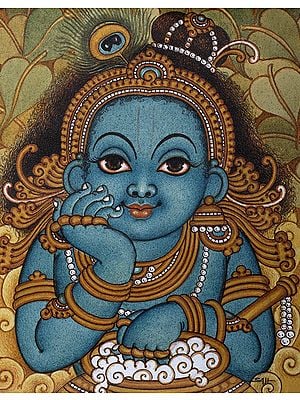