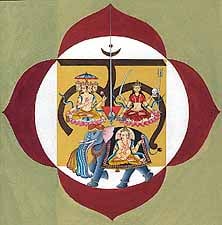 $125
Quantity
Notify me when this item is available

Location: Pelvic plexus; region between anus and genitals; the base of the spine; the first three vertebrae.

Vayu (Air): Apana vayu, the air that expels the semen from the male organ; urine for both sexes; and that which pushes the child from the womb during birth.

Yantra Form: Inscribed in the white circle can be seen the yantra which is a chrome yellow square with four vermilion petals. The square has great significance with regard to earthly awareness, as it represents the earth itself, the four dimensions, and the four directions. The four points form the four pillars or corners of what is known as the quadrangular earth. Four allows for completion, and the earth too embodies elements which make us complete on all levels.

The four lotus petals represent ganglions that are formed at four important nerve endings. The color of the petals is vermilion mixed with a small amount of crimson red.

The seat of the vital force, Kundalini, is depicted variously in the form of a coiled serpent, a lingam or a triangle. The Kundalini serpent is coiled three and one-half times around the svayambhu ("self-born") Lingam. With her mouth open, facing upwards, she is connected with the path of sushumna, the central nerve canal that runs along the spine. The unawakened Kundalini remains coiled, wrapped around the lingam with her tail in her mouth. Because her mouth faces downwards, the flow of energy is downwards. As soon as one begins working with the first chakra, this dormant energy raises its head and flows freely into the channel of sushumna.

The downward pointing triangle at the center of the entire diagram is visualized shows the lingam and Kundalini. It indicates the downward movement of the three main nerves, Ida, Pingala, and Sushumna. The union of these nerves in Muladhara Chakra forms an inverted triangle, which also causes the energy to flow downwards. The color of the lingam is smoky gray, sometimes also said to be the color of a new leaf.

Bija Sound: LANG. Outlined in the Devanagari alphabet this sound can be seen depicted against the background of the yellow square. This sound is produced by putting the lips in a square shape and pushing the tongue also in a square shape, against the palate. This Bija sound vibrates the palate, the brain, and the top of the cranium.

When properly produced, the mantra Lang excites the nadis in the first chakra and creates a lock that closes the downward movement of energy. Upward movement starts when the end of the sound LANG - that is, ANG - vibrates in the upper head. Repeating the sound takes away the insecurities associated with the first chakra and provides the aspirant with financial security, awareness and inner strength. LANG is said to have four "arms." Its vibration helps create a passage inside the Brahma Nadi in order to facilitate the flow of energy.

Vehicle of Bija: The elephant Airavata, the mount of Lord Indra. The skin of the elephant is a soft-gray, the color of clouds. His seven trunks signify the seven aspects of every individual which must be recognized and evolved in harmony with natural laws. These seven aspects are:

The seven types of desires ( for security, procreation, longevity, sharing, knowledge, self-realization, and union) are seen in the trunks and seven colors. They are also associated with the seven chakras, the seven notes in an octave, and the seven major planets.

The elephant represents the nature of a life-long search for food for the body, the mind, and the heart. One who has activated the first chakra walks with the steadfast, assured gait of an elephant. He will strive to increase his amount of control with the heaviest weight he can bear. He will also do his work with humility, like the manual laborer who carries out continuous orders from others. Indeed, one who has mastered control over his indriyas - the organs of sense and work - is said to become Indra, and thus will ride Airavata.

Deity of the Chakra: The deity of this chakra is Bala Brahma (child Brahma). Brahma, the lord of creation, rules the north and is the presiding deity of the first chakra. He is depicted at the top left, as a radiant child with four head and four arms. His skin is the color of wheat. He wears a yellow dhoti (traditional Indian cloth wrapped to cover the lower body) and a scarf. With four arms and four heads, Brahma sees in all the four directions at once. Each head represents one of the four aspects of human consciousness. These are recognized as the following:

1. The Physical Self: Bodily relationship to food, exercise, sleep, and sex. The physical self is manifested through earth, matter, and the mother.

2. The Rational Self: The intellect or conditioned logic of an individual's reasoning processes.

3. The Emotional Self: The moods and sentiments that shift continually within the person. Loyalty and romance are influenced by the emotional self.

4. The Intuitive Self: The inner voice of a person's conscious mind.

In his four arms Brahma holds the following:

a). In his upper left hand, a lotus flower, the symbol of purity.

b). In his second left hand, the sacred scriptures, containing the knowledge of all creation. Brahma may impart sacred knowledge when he is properly invoked.

c). In one right hand, a vase containing nectar. This is amrita, the precious fluid of vital potency.

d). The fourth hand is raised in the mudra of granting fearlessness.

Brahma appears during the twilight hours of dusk and sunrise. By envisioning him, one invokes a peaceful stillness in the mind. All fears and insecurities are resolved through Lord Brahma, the ever-watchful creator.

The shakti of this chakra is Dakini, she can be seen at the upper-right. The energy of Dakini shakti combines the forces of creator, preserver, and destroyer, symbolized by the trident held in one of her left hands.

In her other left hand she holds a skull, which indicates detachment from fear of death - the basic psychological block of the first chakra.

Her upper right hand holds a sword, with which she removes fear, destroys ignorance, and helps the sadhaka surmount all difficulties.

In her other right hand she holds a shield, which provides the power to shield oneself against problems.

Dakini shakti wears a sari of either yellow-peach or vermilion color. In some texts she is shown as an angry-looking, fearsome goddess, but for meditation the images of gods and goddesses should be visualized in their pleasant moods.

Ruler of the Chakra:

The ruler of this chakra is Ganesha. Ganesha, the elephant-headed god, lord of all beginnings, who is invoked to bestow protection over all undertakings.

The figure of Ganesha is very attractive yet difficult for the rational mind to accept as an important deity. Worship of Ganesha involves accepting him as remover of obstacles; this subdues the rational mind, or the left hemisphere - which is analytical and critical in nature - and frees the right hemisphere, which is emotional and which is needed for any spiritual venture. Visualization of Ganesha helps in stopping the internal dialogue. One who is put off by the external form cannot admire the internal beauty of Ganesha, but one who penetrates the physical reality can see in Ganesha the union of love and wisdom, Shakti and Shiva.

Ganesha's skin is orange. He wears a dhoti of lemon yellow color. A silk scarf drapes his shoulders. He has four arms to serve him while he acts as the destroyer of obstacles. Ganesha is the son of Shiva and Parvati. He carries the swastika ( Sanskrit, svastika ), the ancient Indian symbol of the union of the four directions, the upward energy of Lord Vishnu, and solar radiation. In his four arms Ganesha holds the following:

A ladu: A fragrant. sweet symbolizing sattva, the most refined state of pure consciousness. The ladu also brings health and prosperity to the household.

A lotus flower: symbolizing the qualities of selfless action and a stainless nature.

A hatchet: symbolizing control of the "elephant of desires" and the cutting away of the bondage of desires. The hatchet cuts the person away from the false identification of his Self with his physical body.

The fourth hand of Ganesha is raised in the mudra of granting fearlessness.

EFFECTS OF MEDITATION ON THIS CHAKRA:

Muladhara Chakra represents the manifestation of individual consciousness into human form, that is, physical birth. Meditation on this chakra induces the beginnings of awareness, freedom from disease, lightness, inspiration, vitality, vigor, stamina, security , an understanding of inner purity , and softness in the voice and in the inner melody.

If a person with tightened jaws and fists refuses to live in accordance with the natural laws that govern his body, he will create further karma, or worldly entanglement. His sense and work organs will only serve to bring confusion and pain in exchange for temporary gratification. Once a person begins to act in harmony with these natural laws, he will no longer waste energy or pollute his sensory awareness with over- indulgence. Such a person will act wisely and with moderation, exploring his body and mind as vehicles of liberation from the lower realms.

The person dominated by the Muladhara Chakra generally sleeps between ten and twelve hours nightly, on his stomach. This chakra encompasses the planes of genesis, illusion, anger, greed, delusion, avarice, and sensuality. These aspects of the first chakra are fundamental to human existence. The desire for more experience and information acts as a motivating force, a basic impetus for individual development.

The Muladhara Chakra is the seat of the coiled Kundalini, the vital shakti, or energy force. The Kundalini serpent is coiled around the Svayambhu lingam. This foundation chakra is indeed the root of all growth and awareness of the divinity of man.