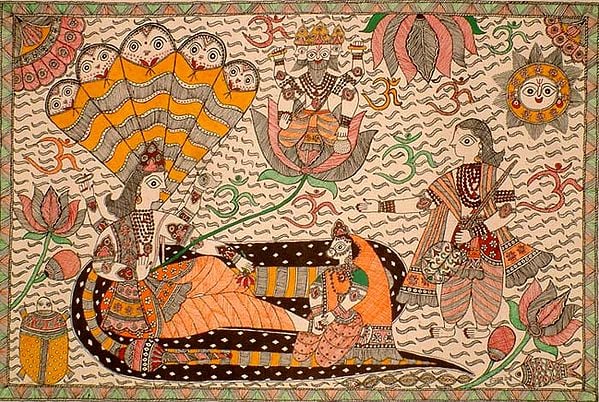 Fair trade
The relation between Madhubani art and religion is a universal feature. It is mainly dominated and shaped by the religious motif.

Vishnu has widespread iconic representations but most popularly, he is represented in art as reposing on the coils of respect Shesha. Here, the numerous heads of Sheshnag are shown frontally, and despite their fangs, they fail to look menacing. The beautifully ornamented Lakshmi kneels at his feet, caressing them lovingly. The stem of a lotus shoots up from his navel and on the blossom sits Brahma. Vishnu's right hand is raised in abhaya mudra and the other three hold a disc, a conch shell and a lotus.

His fourth attribute, the mace, lies next to him, the primeval sound of 'Aum' emanates from his conch, echoing in the cosmos. Narada, who tours the world, has come to pay obeisance to Lord Vishnu, who blesses him. The lower corners show a fish and a turtle who are not only creatures of the sea but incarnations of Vishnu himself.

The background is of cosmic waters, represented by small waves, with lotus flowers floating in them.