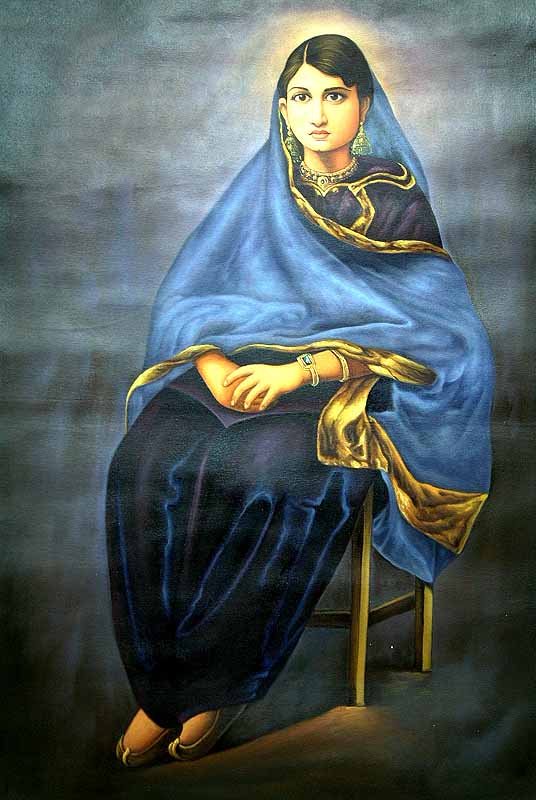 The Portrait of a Young Girl

$225
FREE Delivery
This item can be backordered
Time required to recreate this artwork
4 to 6 weeks
Advance to be paid now
$45 (20%)
Balance to be paid once product is ready
$180
Notify me when this item is available
This portrait of a young girl is a brilliant attempt at discovering in simplest forms and few colours a youthful person with hopes, ambitions and dreams of young age in her eyes. A plain background consisting of deep maroon with no form, pattern or motif to break it constitutes the basis for the painting. The dark depth of the deep maroon breaks only a little around the face of the figure with the radiation of its glow. With these few strokes of his brush the artist obtains three objectives. It helps break the monotonous expanse of a dark-deep back-drop. It creates a radiated region amidst a dark total to discover distinction for the figure. And, the artist, after he has once obtained this glowing distinction for his figure's face, lets lose, or at least diffuse, all his forms into the formless background. It is herein that the portrait seeks its distinction. The face speaks for the totality of the person portrayed. It reflects her intrinsic being and in her static action-less form the artist has sought to depict the turmoil within. The artist seems to aim at keeping the viewing eye caught to her face, which is the mirror of her entire being, and convey to it whatever he has to. It is perhaps with such object in mind that the artist has evaded many forms or a sharp distinction for forms which necessity created.

The artist has followed in his portrayal the late 19th century art style of Raja Ravi Varma, which is the early form of Indian modern art school. He has rendered his portrait with European realism, larger canvas, colours diffusing in each other and the light and shade effects but the personality discovered amidst these stylistic elements has imbued in it the fragrance of its own soil and the colours of its own culture. Everything, her features, complexion, hair style, style of costume and embroidery, ornaments, shoes, speak of her Kashmiri or Western Indian origin. The pendants in her ears are typical of Kashmir, whereas her velvet 'feran' laced and embroidered with gold thread and 'salwar' with narrow bottom and broad central circumference adhere to the life-style of both, Kashmir as well as Punjab, but in any case essentially to that which is called Indian. Despite a formal portrait in the glow of his figure's eyes the artist has packs all her ambitions and dreams.

This description by Prof. P.C. Jain. Prof. Jain specializes on the aesthetics of literature and is the author of numerous books on Indian art and culture.