Radha and Krishna with Gopis in Attendance

FREE Delivery
$975
This item can be backordered
Time required to recreate this artwork
6 to 8 weeks
Advance to be paid now
$195 (20%)
Balance to be paid once product is ready
$780
Notify me when this item is available
A large Orissa Pata-chitra – painting on cloth, rendered using typical Oriya weave, a blend of fine mercerized cotton and silk yarns with peach as its base colour, it represents Radha and Krishna in full regalia with a crew of Gopis attending on them. Obviously a painting for a wall, same as a Pichhawai or a Kalamakari, Orissa Pata-chitra is a painting with a distinction of its own. It has, and often has, Krishna as its theme, the same as has a Pichhawai, and sometimes a Kalamakari, a Pata-chitra is different from any other class of cloth-painting in the style of its figures, their iconography, anatomy, apparels, mode of wearing them, hair-style, ornaments, type of trees, overall background and even body-gestures, even when portraying an identical theme.

Rendered using mainly black and white, yellow, for highlighting ornaments, some special areas of borders, or motifs and design-patterns used in them, costumes’ borders, brocaded ends and fields, and a few other objects like rods of umbrellas and royal standard, fan’s handle, flute, flower, napkin …, and pink, exclusively for a course in multi-layered border, the Pata-chitra represents Radha and Krishna in the centre flanked by attending Gopis, four on either side. The first on the left of the divine couple is carrying a royal standard; next to her, is a drummer, carrying a double drum, the third from the divine couple is an umbrella-holding Gopi, and the fourth and the last, holding a lotus to offer it to Lord Krishna. This fourth Gopi has behind her a cow. As suggest the multiple cloud motifs on the cow’s body and its white body-colour, it is none other than the cosmic cow Kamadhenu.

The first of those in attendance on the right of the divine couple is one blowing a flywhisk, the next to her is one holding in her hands the royal canopy well adorned with a gems-studded gold apex and the periphery with gold pendants, the third from Lord Krishna is holding a fan with golden handle, and the last on the right, is the Gopi carrying for Lord Krishna a napkin. The rhythmically gesticulated figure of the Gopi on the right appears as in a dance pose. Astonished by the unparalleled beauty of the divine couple her face and the gesture of her left hand betray an emotion of bewilderment. On the extreme right is another cow, an essential attribute of Krishna’s iconography. The style of hair-dressing of each of the eight Gopis and even Radha reveals a distinction and exclusivity. Except in case of two Gopis, one on the right, and other, on the left, whose lower garments are carried over the shoulder and are wrapped around, all Gopis even Radha, have a separate garment, sari or lehenga, for the body’s lower half, that is, below the waist, and a blouse and large sash for the upper halves. Except one wearing a sari in Bengal style and some putting on designed saris, all Gopis are putting on ‘langad-dhoti’ in typical Maharashtrian style.

Not a dramatic situation as are in abundance in Krishna-lila, the painting represents one of the many sublime occasions in Krishna’s life, especially when he was with Radha, symbolising union of sojourning self that is Radha, with the Supreme Self that is Krishna, and Radha’s friends Gopis, the other selves yet to begin their journey, hailing the divine act. Under a tree, symbolic of the mythical Kadamba, Krishna has been portrayed as standing in ‘tri-bhang’ – triple-curved posture holding his flute in his hands as playing on it, though with his attention drawn by just arrived Radha his face has turned to her on his left. With three curves of his body-posture, accompanied by the melody of his divine flute, Krishna pervades and enchants all three worlds. In earthly idiom, Krishna seems to have been standing under the Kadamba for whatever time, while all Gopis, even Radha, as suggests the position of every figure’s legs : long strides indicating swift walk, seem to have just arrived. 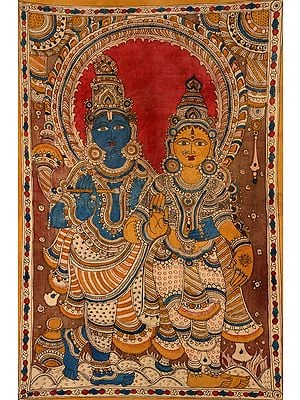 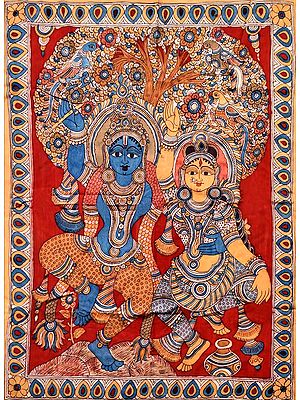 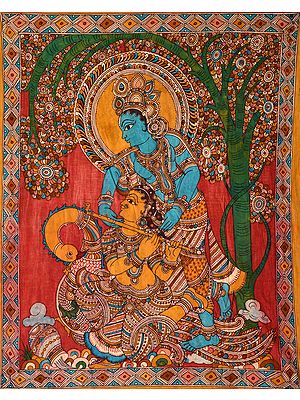 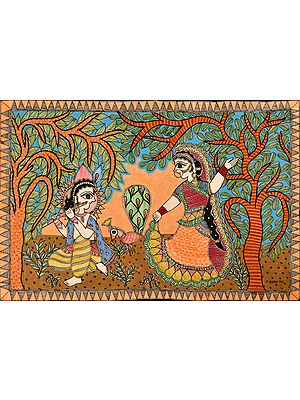 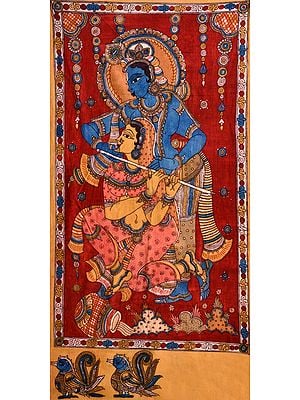 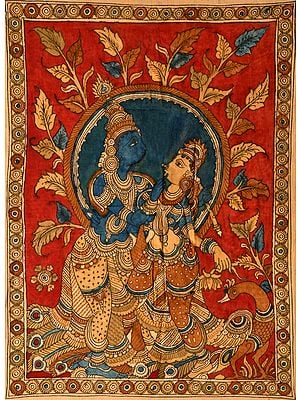 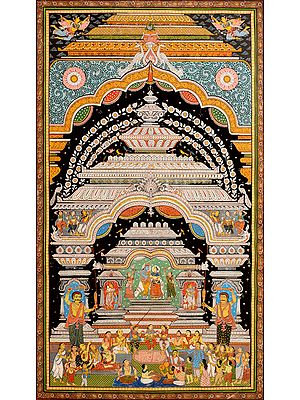 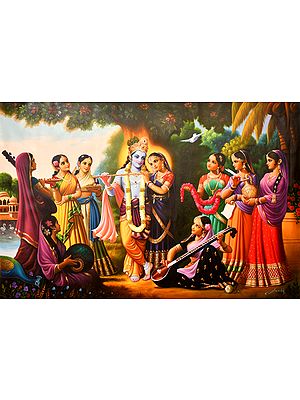 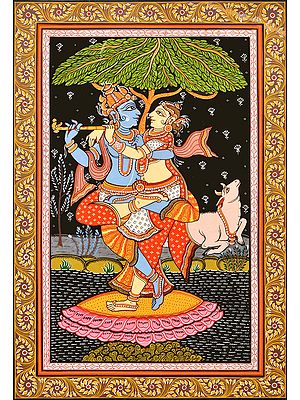 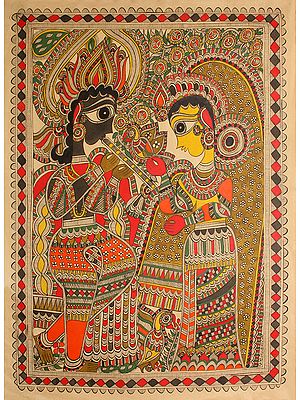 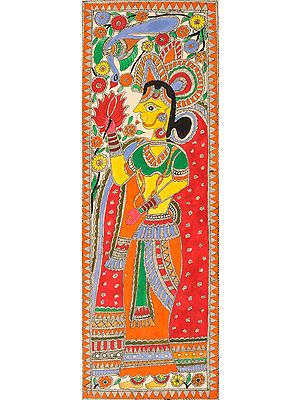 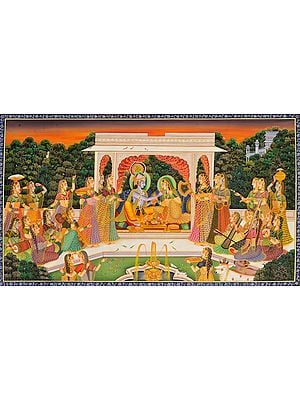 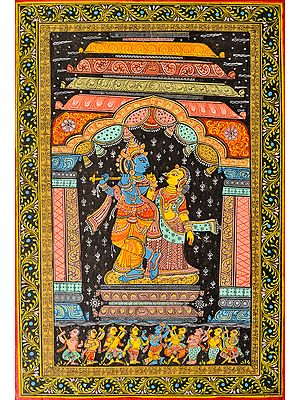 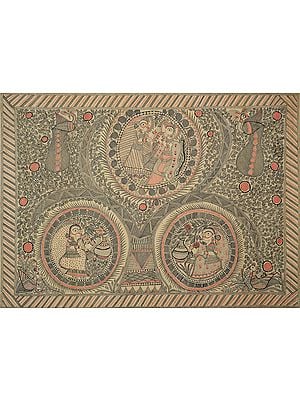 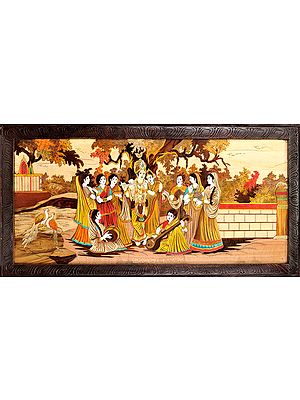