Shiva and Parvati Venerated by Ganesha 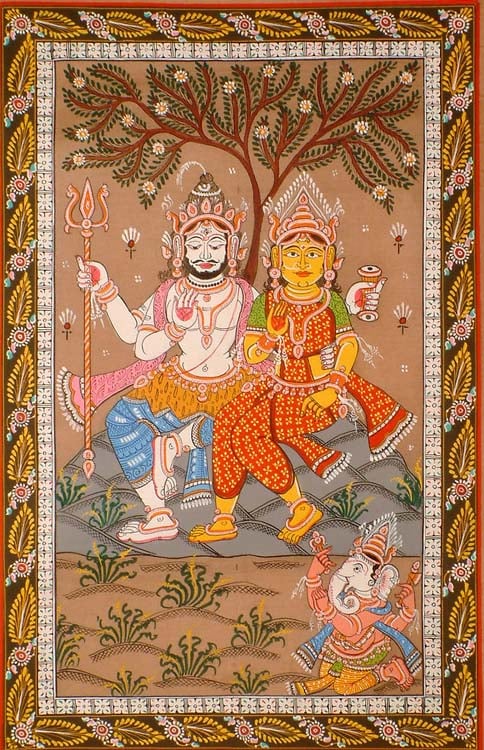 Shiva and Parvati Venerated by Ganesha

$105.00
FREE Delivery
This item can be backordered
Time required to recreate this artwork
6 to 8 weeks
Advance to be paid now
$21.00 (20%)
Balance to be paid once product is ready
$84.00
Notify me when this item is available
According to Siva Purana, Shiva is pictured as white as camphor. He is the embodiment of tamas, and should therefore be black. But since light and darkness are inseparable, Shiva appears white. Seated on a rock with his golden complexioned spouse Parvati, Shiva holds her by the waist and blesses the world with the right hand. The back two hands duly hold his attributes  the trident and the hour shaped drum. Both of them wear exquisitely crafted crowns. Shiva, in this painting sports a beard and moustache. Serpents, a prominent part of his iconography, are conspicuous by their absence. Shiva, with his half-closed eyes look inwards, and Parvati looks straight outwards.

The background consists of a flowering tree, the branches of which spread to provide cover to the couple. Abundant flowers and leaves burden the tree limbs. The foreground has their son Ganesha, kneeling in obeisance. In two hands, he holds an axe and an elephant goad, and the other two are held in 'Namaskar mudra'. The artist tries to experiment with colours, using pale blues and pinks, while sticking mainly to reds and yellows.