Shiva as Pashupatinath with Parvati 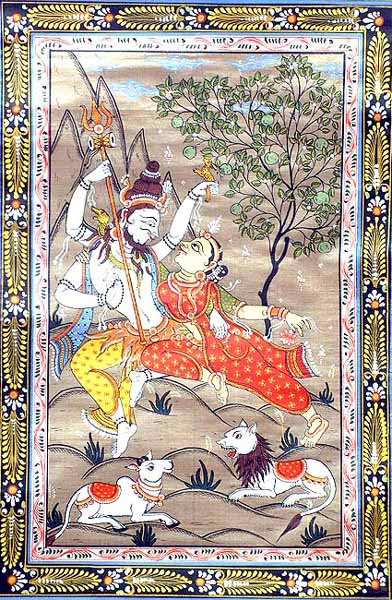 Here we see him dressed as a yogi, in a leopard skin loin cloth with a shoulder scarf flowing about him. His matted hair is tied up in a knot. In this silk painting, the artist has bestowed Shiva with a moustache and a flowing beard. Around his neck is a ferocious serpent. He holds a trident in one hand and a small deer in the other, justifying his title of Pashupati (Lord of the animals). In one hand he holds a rosary of tulsi beads and with the other he holds his consort by the waist. Parvati, a woman of broad face and a voluptuous figure, looks resplendent in the traditional Orissan jewellery. Her sharp nose and the lotus shaped eyes are her special attributes.

In the foreground sits Shiva's vehicle, Nandi, the bull, looking calm and gentle. The lion, Parvati's mount, on the other hand looks aggressive. In the background are the hills of Mount Kailash playing hest to the loving couple. The form, the colours and the treatment of this traditional silk paintings reeks of local flavour.