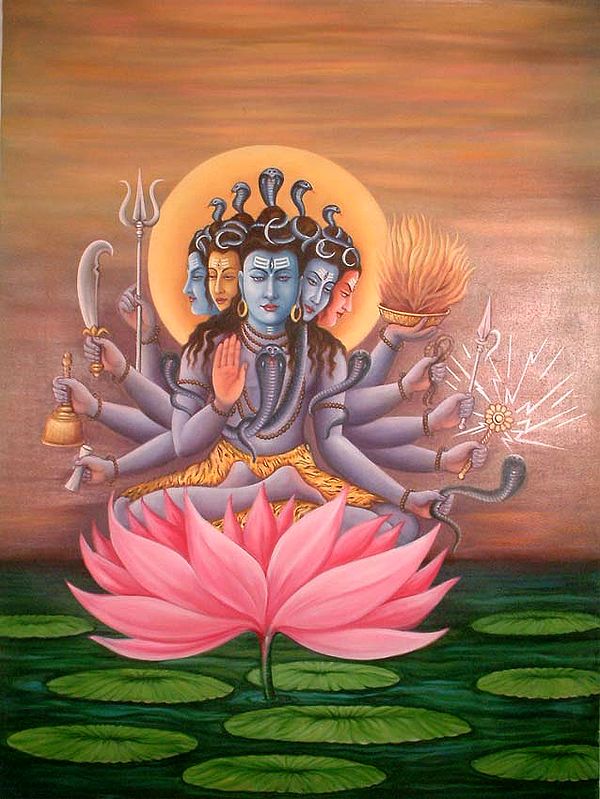 $315.00FREE Delivery
This item can be backordered
Time required to recreate this artwork
4 to 6 weeks
Advance to be paid now
$63.00 (20%)
Balance to be paid once product is ready
$252.00
Notify me when this item is available
Shiva is one of the most important and popular gods of India. The Shiva Purana regards him as performing the triple functions of creation, protection and destruction. He is also identified with the Vedic god, Rudra.

In the cosmic waters, atop a blooming lotus, sits Shiva. He is shown with five heads and ten arms. The artist has used different colours for the faces, but what remains constant is the peaceful countenance and the serpents forming the pinnacle of the karanda mukuta. The serpents are closely associated with Shiva. They earn a place of pride coiled around his neck and other parts of the body. Serpents also represent Kundalini, the supine energy at the base of the spine. The hands of Shiva holds weapons of destruction, justifying his role in the Hindu Trinity as the Destroyer.

The foreground has brilliant colours of pink and green but the colour palette subdues as it goes up, ending in the background that is a calm mix of ochres and browns, the apparent distinction between the two being quite stark.