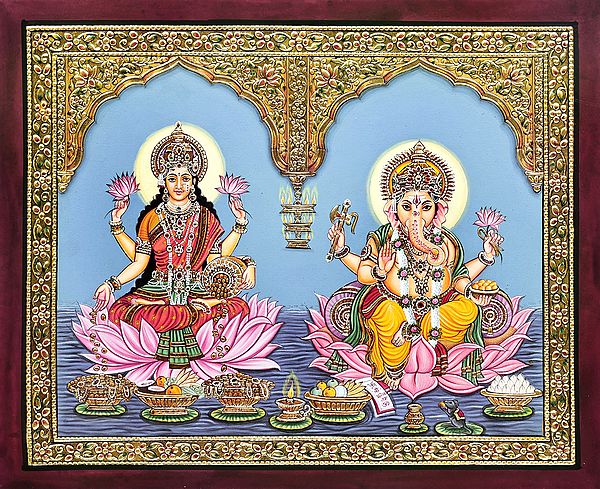 Ganesha and Lakshmi are the most popular duo worshipped in Hinduism, especially during the festival of Diwali, it is said that your prayers will be fulfilled only if you worship Ganesha and Lakshmi together. Lord Ganesha is Goddess Lakshmi’s adopted son and was granted with a boon of all her accomplishments, luxury and prosperity. Lakshmi had promised Parvati that by not worshipping Ganesha along with Lakshmi, people’s wishes will remain incomplete and they would be deprived of prosperity and wisdom. This watercolour art depicts the duo gracefully settled in their iconic postures with the sun aureole behind their heads indicative of their divineness.

Perched on a large lotus flower in her self-contained beauty, Goddess Lakshmi rains gold coins from both her anterior hands, symbolic of her being the giver of wealth and beauty. Lord Ganesha on the other side has a comforting lotus couch to sit on and blesses of courage and strength. The painter’s eye for brightness can be averred by the use of all bright colours of the palette while defining their silken garbs. The royal stone-studded Kundan jewels, glorious crowns and Ganesha's long flower garland are a reflection of the deities’ persona of luxury and cosmic beauty. Zoom in to their facial features for a realistic depiction of subtleness, calm, composure and a royal charm.

The eye-catchy feature is the floral 24 karat gold plated temple frame within which the deities reside and a lighted lamp hung in the centre. Not just this, even the ritual puja baskets, filled with fruits, sweets and jewels are in similar gold plating. Notice the clear blue sky that complements the blue lotus water that forms serene ripples in the ecstasy of being a base for the heavenly beings. The red outer border gives a deep royal touch to this Ganesha Lakshmi watercolour painting. Have this to fill up your wall space in the most beauteous ways.