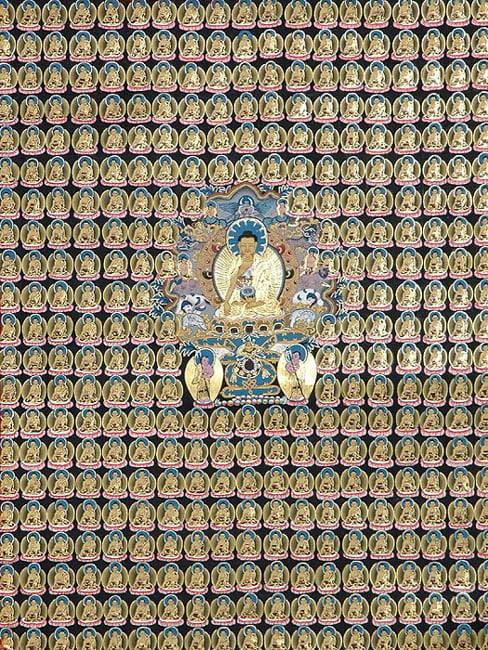 $146.25  $195   (25% off)
Quantity
Notify me when this item is available
According to early Buddhist tradition Shakyamuni at his birth had said that he was coming to earth for the last time and this was last in a perpetual series of existences. The many previous existences of the Buddha are known from legends and Jatakas stories about his previous births. The Mahayanists however believe that the Buddhas have appeared in the world at intervals and in series that know no beginning or end. Little is known, however, of these innumerable Buddhas preceding the Buddha Shakyamuni. Thus the Buddhas who have been, are, and will be, are more numerous than the grains of sand on the bank of the Ganga.

In the later forms of Buddhism, the theology grew and, incidentally, so did the number of Buddhas, to a series of 8,9,24,35,52, and 1,000 and various other numbers. Here it is not the power of the story that counts, but the might of the number, with its symbolic value of infinity is good, more is better, or their strength in numbers and repetition. This type of portrayal is typical in monasteries with what are known as thousand-Buddha wall and they frequently appear as a thangka theme.

The present thangka most closely resembles a Thousand-Buddha wall. The central Buddha Shakyamuni is seated in bhumisparsha-mudra on the six-ornament throne of enlightenment. His two chief disciples, Sariputra and Maudgalyayana are standing on each side of his throne. Below his throne, and between his chief disciples, are auspicious offerings and symbols. Three hundred sixty-four images of Buddhas out of the Thousand-Buddhas, in identical postures, mudra and color are beautifully depicted here in geometric pattern of squares. A cave of the Thousand-Buddha is the name of the world-renowned grottoes at Tun-huang (China). A native of Tun-huang, Dharmaraksha by name, who live between third and fourth century A.D. had translated the Bhadra-Kalpika-sutra in Chinese which is devoted to Thousand Buddhas. Vidyakarasimha and Dpal-dbyans translated the text into Tibetan.

The Thousand Buddhas bless the present world of Bhadra-kalpa. There is a legend pertaining to the Thousand Buddhas, endless ages ago there lived a great king called Kuang-te who insisted on all his subjects studying the Vedas. Among his scholars were a thousand schoolboys. One of them chanced to hear of the "Three Treasures" (Tripitaka) of Buddhism and asked a certain monk what these Treasures might be. So soon as the Treasures had been named not only the questioner but also all the other 999 schoolboys, with flowers and incense in their hands, followed the monk to his convent and there fell down before the image of Buddha. It is thousand schoolboys who were reborn as the Thousand Buddhas. A festival of Buddha names is popular in Japan.

All the figures are brilliantly drawn and painted, the painting is very suitable for sadhana and practices.

L. A Waddell, Buddhism and Lamaism of Tibet, Delh1979, (reprint) 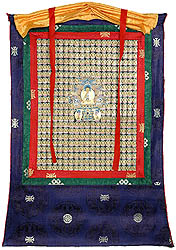