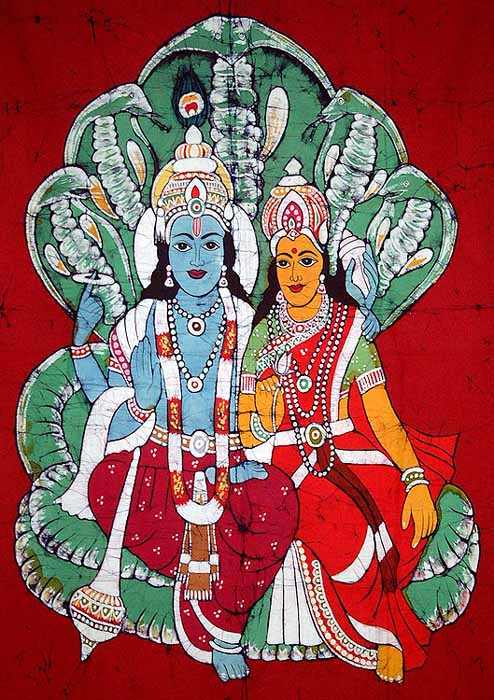 Fair trade
This painting shows Lord Vishnu with his consort Goddess Lakshmi, seated on the coils of Sheshanag, who has his hood spread over them.

Lore has it that Lakshmi arose out of the sea of milk, the primordial cosmic ocean, bearing a red lotus in her hand. Each member of the divine triad- Brahma, Vishnu and Shiva (creator, preserver and destroyer respectively)- wanted to have her for himself. Shiva's claim was refused for he had already claimed the Moon, Brahma had Saraswati, so Vishnu claimed her and she was born and reborn as his consort during all of his ten incarnations.

A few texts say that Lakshmi is the wife of Dharma. She and several other goddesses, all of whom are personifications of certain auspicious qualities, are said to have been given to Dharma in marriage. This association seems primarily to represent a thinly disguised "wedding" of Dharma (virtuous conduct) with Lakshmi (prosperity and well-being). The point of the association seems to be to teach that by performing Dharma one obtains prosperity.

Tradition also associates Lakshmi with Kubera, the ugly lord of the Yakshas. The Yakshas were a race of supernatural creatures who lived outside the pale of civilization. Their connection with Lakshmi perhaps springs from the fact that they were notable for a propensity for collecting, guarding and distributing wealth. Association with Kubera deepens the aura of mystery and underworld connections that attaches itself to Lakshmi. Yakshas are also symbolic of fertility.

An interesting and fully developed association is between Lakshmi and the god Indra. Indra is traditionally known as the king of the gods, the foremost of the gods, and he is typically described as a heavenly king. It is therefore appropriate for Shri-Lakshmi to be associated with him as his wife or consort. In these myths she appears as the embodiment of royal authority, as a being whose presence is essential for the effective wielding of royal power and the creation of royal prosperity.

Several myths of this genre describe Shri-Lakshmi as leaving one ruler for another. She is said, for example, to dwell even with a demon named Bali. The concerned legend makes clear the union between Lakshmi and victorious kings. According to this legend Bali defeats Indra. Lakshmi is attracted to Bali's winning ways and bravery and joins him along with her attendant auspicious virtues. In association with the propitious goddess, Bali rules the three worlds (earth, heavens and the nether-worlds) with virtue, and under his rule there is prosperity all around. Only when the dethroned gods managed to trick Bali into surrendering does Shri-Lakshmi depart from Bali, leaving him lusterless and powerless. Along with Lakshmi, the following qualities depart from Bali: good conduct, virtuous behavior, truth, activity and strength.

Lakshmi's association with so many different male deities and with the notorious fleetingness of good fortune earned her a reputation for fickleness and inconstancy. In one text she is said to be so unsteady that even in a picture she moves and that if she sticks with Vishnu it is only because she is attracted to his many different forms (avataras)! She is thus also known as 'Chanchala', or the restless one.

In a mythological sense her fickleness and adventurous nature slowly begin to change once she is identified totally with Vishnu, and finally becomes still. She then becomes the steadfast, obedient and loyal wife who vows to reunite with her husband in all his next lives. As the cook at the Jagannatha temple in Puri, she prepares food for her lord and his devotees. In the famous paintings on the walls of the Badami caves in central India, she sits on the ground near where her lord reclines upon a throne, leaning on him; a model of social decorum and correctitude.

This is a batik painting. Batik is a medium that lies somewhere between art and craft, and is believed to be at least 2000 years old.

The technique of batik is a demanding one. In general, the final design must be conceived before the picture is begun. The batik artist works intimately with color; if he wishes parts of his design to be light yellow, for example, all these parts must be waxed at the same time before any subsequent dyeing. He cannot isolate one part of his design and complete it before moving on to the others as an artist in oils or watercolor may. He must create his design in stages, each of which encompasses the whole picture.

The basic process of batik is simple. It consists of permeating an area of fabric with hot wax so that the wax resists the penetration of dye.

If the cloth we begin with is white, such as bleached cotton, linen, or silk, then wherever we apply hot wax that area will remain white in the final design. After the first waxing the fabric is dipped into a dye bath whose color is the lightest tone of those to be used. When the piece has dried, we see an area of white and an area of cloth that is the color of the first dyeing. Wax is now applied to those parts in which we wish to retain the first color, and the entire fabric is immersed in the second dye bath whose color is darker in tone than the first. This process is repeated until the darkest tone required in the final design has been achieved. When the fabric, now almost wholly waxed, has dried it is placed between sheets of absorbent paper and a hot iron applied. As the sheets of paper absorb the wax they are replaced by fresh sheets until the wax is removed. At this point the final design is seen clearly for the first time.

As with painting, color is an integral part of batik. A painter uses pigment; a batik artist uses dyes. The Painter can, if he chooses, completely obliterate an undesirable color by covering it with another color. Perhaps he must wait until the unwanted color is dry, but there is no doubt about it, he has another chance, he can cover up his mistake.

In batik the correction of mistakes, in most cases, is impossible. The Painter is not limited in any way in the variety of colors he uses and juxtaposes. In batik, however, each color used is significantly changed by the proceeding color; or at least it is certainly affected by the color "underneath". The only pure color is the first one, so all other colors used are mixtures, determined largely by the first color, or the first strong color.