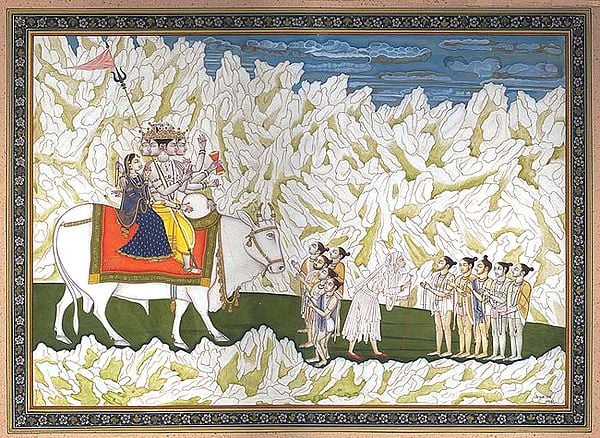 $965.00
This item can be backordered
Time required to recreate this artwork
8 to 12 weeks
Advance to be paid now
$193.00 (20%)
Balance to be paid once product is ready
$772.00
Notify me when this item is available
Save to Wishlist Send as E-card Share by Email
This rare miniature represents a group of five young sages visiting Kedarnath for paying homage to Shiva and Parvati. Deep into high Himalayan hills, Kedarnath is one of the twelve 'Jyotirlingas'. As the Shaivite mythology has it, Shiva had twelve incarnations. Each of the 'Jyotirlinga' represents these twelve incarnations of Shiva in one form; that is, paying homage to a 'Jyotirlinga' is considered equal to paying homage to Shiva's twelve incarnated forms. It is said, after the death of his loved consort Sati, Shiva almost deserted Mount Kailash and wandered into other parts of Himalayas. Later he settled at Badri in a cavern. Once when with Parvati he was away from Badri, Vishnu happened to pass therefrom. Impressed by Badri's ambience and a well-equipped abode, and not knowing that it was Shiva's, he occupied it. When Shiva came back, he found Vishnu quietly sleeping in his seat. Without revealing to Vishnu that it was his place, Shiva moved ahead and settled finally at Kedar. With Shiva and Vishnu enshrined, Kedar and Badri attained the status of Shiva and Vishnu themselves and were henceforth Kedarnath and Badrinath  the supreme protectors and not mere two sacred shrines.

The artist has used a style similar to that of a late eighteenth century series of Pahari miniatures, in the National Museum, New Delhi, depicting a similar theme, though with the difference that in that series the pilgrims are elderly, and they do not encounter Shiva in person but only the Shiva-lingam, around which they circumambulate and perform various rituals. These folios also do not have the figure of the elderly sage in white rags. Scholars have yet not been able to discover the textual context of the portrayed theme, though most of them identify the place as Kedarnath. Mount Kailash is a single peak, and it is often so drawn also in paintings. In this pilgrimage miniature and in aforementioned ones, the terrain comprises a range of hills, much like Kedarnath.

These paintings, and this one in particular, appear to be more an imaginative assimilation of different myths. Himalayas has been the most loved resort of pilgrims and recluses since ancient days, but texts refer to just two significant occasions when a group of five pilgrims visited the Himalayas. Of these texts one is the Mahabharata, and other, the Linga Purana. Mahabharata states that five Pandavas, after the Great War was over, retired to Himalayas. Some scholars contemplate that the five sages might be five Pandavas. But the absence of Draupadi and Pandavas' dog disturbs this equation. As has a myth in the Linga Purana, Shiva once went to Indraloka but was not allowed entry. Deeply hurt Shiva came back. When Indra heard of the event, he dispatched five Brahmins to go to the Himalayas and somehow appease Shiva. The five pilgrims are sometimes identified as the five Brahmins sent by Indra.

Both of these versions are, however, silent in regard to the old sage in white robe. The Bhagavata Purana alludes to a princely saint  'rajarshi', whose name was Kedar, and the Shatpath Brahmin and Shiva Purana, to one of Shiva's incarnations, named Kedareshvara. It seems, the artist has assimilated the mythical Kedareshvara as the figure of the old sage. Sage's white rags have been rendered much like the snow-clad peaks of Kedarnath. He also assimilated Shiva's Panchamukha Sadashiva form. As it suggests, the young pilgrims first encounter Kedareshvara  Shiva in incarnated form, and find the path ahead and have Sadashiva and Parvati before them only after they have appropriately answered him. The artist has denoted the time-gap between their encounter with Kedareshvara and realising Sadashiva by slightly grown beards.

The artist is well aware of the high altitude of Kedarnath. He has painted the entire range without vegetation, as beyond a certain height trees and plants do not grow. The recessed parts of snow-clad peaks look bluish green, and not dark black, as the shadow of snow glows even when there is no sunlight. The scene is placed inside a cavern, which is green but not comprising any kind of shrubs or vegetation. The sky over the snow-covered Himalayan peaks has foggy look, and fog again looks like snow. The identity of the young pilgrims, as recluses, reveals from the style of their clothes and coiffeurs. Though largely worn out, the robe, as also the shoes and staff of the old sage, suggest that he is either Kedareshvara or the princely sage of the Bhagavata Purana.

Imagination has its real role in discovering the form of Shiva. He has been conceived not only as Sadashiva with five faces representing five cosmic elements but also with Parvati, the primordial cosmic energy. This Panch-mukha' form of Shiva represents him also as 'Tatpurusha', 'Vamadeva', 'Aghora', 'Sadyojata', and 'Ishan' wherein manifest respectively wind, water, fire, creative function and space. His fifth face, looking above Himalayan peaks, overlooks all heights. He has been portrayed as riding his bull that represents righteousness and formidability. He has his regular attributes but his 'pitambara'  yellow costume, blue complexion and crown are essentially Vaishnavite. Thus, by combining Vishnu in his form, he is also Harihara  the absolute God with all divine attributes contained in one form.