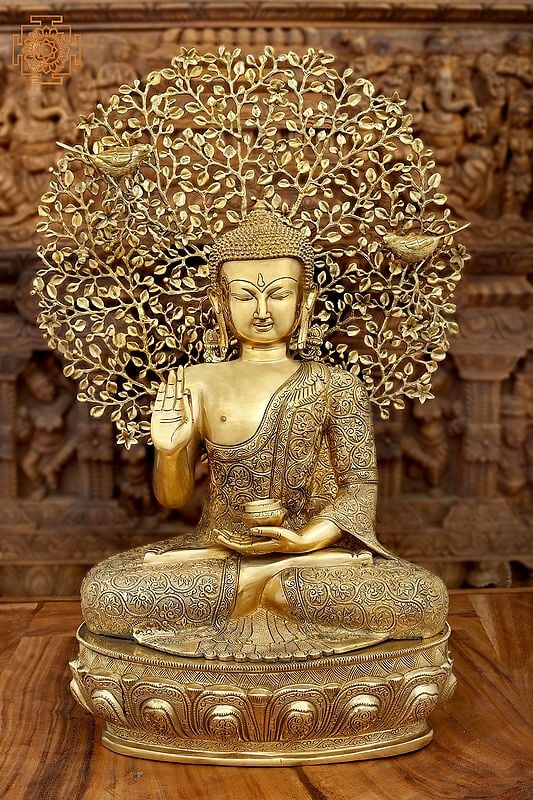 Stately neck and shoulders balanced on a super-straight spine. The regal bearing of the erstwhile Shakyamuni is captured with a great deal of skill in this seated Buddha composition. The long, gracefully sculpted fingers of the right hand gathered in the dharmachakra mudra. A superbly engraved robe draped over a single shoulder. The undulations of the left hand on the lap, which cradles the little almsbowl, a mere remnant of His days of mendicancy. Ornate kundalas (danglers) in the lengthened ears graze His gently motioning clavicles.

The most striking aspects of this murti are, first, the robe of the Buddha and, second, the Bodhi tree that forms an aureole at the back. Richly engraved silk clothes the contemplative figure - from the sheer attention to detail with which the engravings have been executed, to the fall of the fabric at the wrists and ankles and down the torso. A curvaceous vine motif with a densely petalled flower recurs throughout the robe. Its hems are spread on the surface of the throne; layered lotus petals carved around the circular edge, an integral element of traditional Buddhist iconography.

A fig tree with a teeming canopy rises behind the figure of the monk. A narrow shoot branches out into a dense network of leaf and vein and petal, each aspect of which has been executed with untiring precision and skill. A perfectly round silhouette, akin to an organic halo. Birds perched therein, their little bodies turned towards the Buddha as if in devotion.