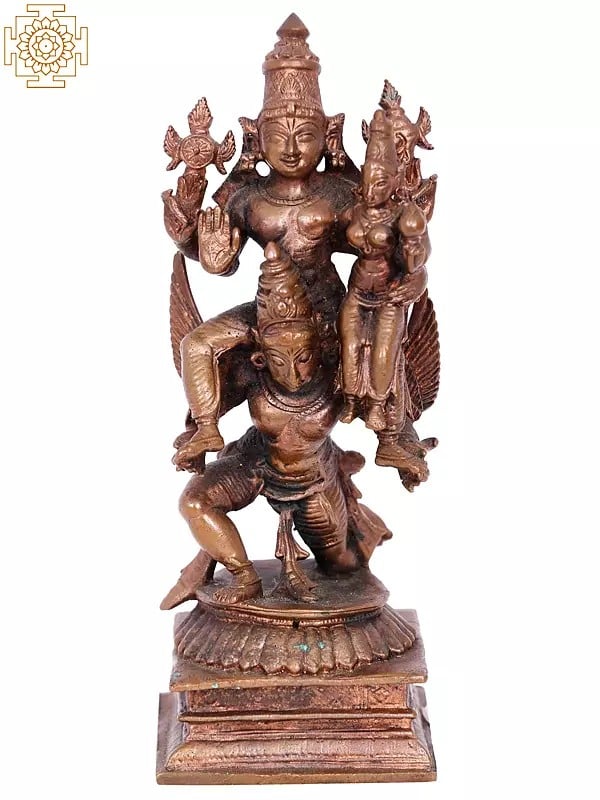 This proud and wholly majestic sculpture from Swamimalai, executed in the ‘madhuchista vidhana’ lost wax technique of bronze casting, portrays the triumphant and divine union of Vishnu and Lakshmi with the ever-faithful mount or ‘vahana’ Garuda supporting them on a raised lotus plinth. Garuda’s anthropomorphic form, poised on his knees, holds Vishnu’s two legs gently in his palms, and as detailed in the Shilaparatna, his wings are open, ready to take the divine couple to Vaikuntha, their supreme abode. The association of Garuda and Vishnu symbolises a divine presence and royal kingship, and stately powers to trump over adharmic kings.

Vishnu’s powerful stature of grace and wrath is exhibited in his mannerisms: his ‘ananda bhava’ raises his front right hand in the fear-dispelling ‘abhaya mudra,’ while the two hands in back hold his attributes – the ‘sudarshana chakra’ or the war discus, and the conch. His left fore hand wraps itself around Lakshmi, his shakti, his supreme consort, who is perched on his lap. As the goddess of wealth, wisdom, and abundance, she holds the lotus, complimenting her role as the Mother Goddess for the pantheon of Hindu gods, as well as the ‘Tridevi’ triumvirate of Hindu goddesses. Vishnu’s image of supporting Parvati is reminiscent of his avatar Varaha supporting the goddess Bhudevi in his arms, rescuing her from the demon Hiranyakasha who hid the Earth under the primordial ocean – and this sculptural variation can be accessed here.

Another variation of this image – as a water colour painting made in the Kangra style – can be found here.