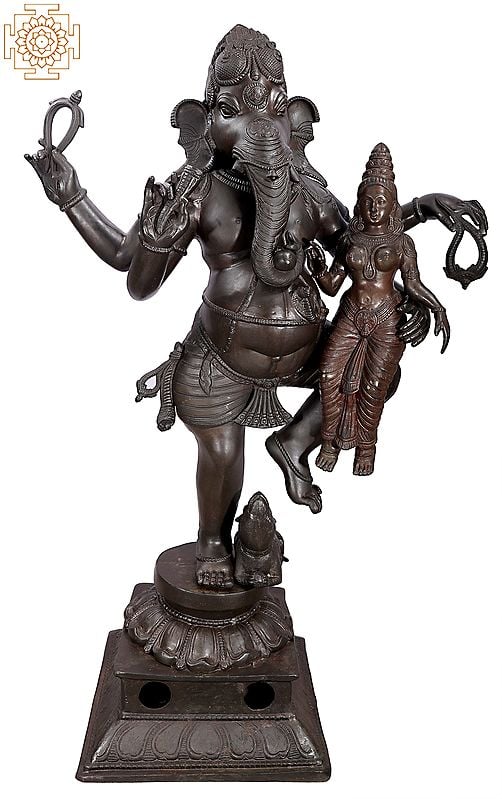 This tall brass statue represents the four-armed elephant god Lord Ganesh with one of his Shaktis supporting on his left thigh. Elegantly composed with reflection of benignity in eyes this image of the elephant god with great divine aura and deep quiescence on his face, is a unique blend of many forms of his classical iconography, mainly Ekadanta, Shakti-Ganapati, Varad-Ganapati and Sankatahara Ganapati : all his four-armed manifestations, a noose being one of the essential attributes of them all, and all from among his thirty-two forms that early Puranas identify. In each of these forms Lord Ganesh is a benign protector of his devotees and blesses them with the ‘desired’. A blend of four benign forms, the benignity of the statue is self-multiplied.

Almost fully removed right tusk and the same held in his normal right hand define his Ekadanta manifestation, one of his earliest eight forms that texts perceive as prevailing over eight weaknesses inherent in man. Lord Ganesh in his Ekadanta manifestation vanquishes man’s arrogance and makes the life harmonious. However, Shakti who has been cast as seated on the left thigh of the elephant god is not an aspect of Ekadanta Ganapati modeling. It is mainly in his manifestations as Shakti-Ganapati, Varad-Ganapati and Sankatahara Ganapati that Shakti is associated with his form. In all three forms he supports her figure on his left thigh.

All three, Shakti-Ganapati, Varad-Ganapati and Sankatahara Ganapati, are mostly his seated figures, though Shakti-Ganapati, the protector of house-hold and his devotees in general, and Sankatahara, an aspect of Vighnesha and the dispeller of all detriments, are often required to rush and are hence also conceived as standing or as ready to move. However, this form of Ganapati combines the elements also of his Varad-Ganapati manifestation, mainly the pot of jewels he is concealing in is trunk, and a third eye which the circle on his forehead symbolises. These are the features of the Varad-Ganapati iconography.

Lord Ganesh is putting on just a loincloth, though artistically pleated and with an ornamental frill on the front it reveals rare beauty. In contrast, his Shakti is putting on an elegant beautifully pleated ‘antariya’ – lower wear, held on her waist by a heavy girdle. It has a frontal ‘patta’ – ornamental band. The ornaments that Lord Ganesh is putting are few but quite elegant and characteristic to his usual iconography : beaded rings around wrists, arms and feet, laces of beads around his neck, a helmet styled like a hair-dressing ornament adorned with laces of pearls, a belly-band and a yajnopavit. As simply is clad and ornamented his Shakti. Besides her ‘antariya’ and the girdle holding the ‘antariya’ in its place, she is putting on gold bangles, bracelets, ear-rings, hair-ornaments, feet-ornaments and a gorgeous necklace down to her breasts artistically lying between them.

The statue of Lord Ganesh has been installed on a two-tiered high pedestal, a square podium with a large bottom tapering upwards to hold an upper chamber, being its base, and a full blooming inverted lotus with a plain circular apex, its top. The elaborately bejeweled figure of Lord Ganesh is in ‘khadgasana’ – standing posture, though with his left leg lifted upwards for holding his ‘Shakti’ on it and the upwards raised upper right hand with noose in it, obviously for balancing the body, his figure acquires a semi-dance form. There is an upwards looking tiny mouse, his mount, exactly under his raised leg as if stationing it to support its Lord’s leg in case it fails to keep its position and drops. In precision, figural grace, craftsmanship, anatomical proportions, finish and overall execution the statue is simply rare. The statue is essentially an aesthetic art-work, not so much a sanctum-image, for any drawing hall.