Abode Of The Devagana, The Cow 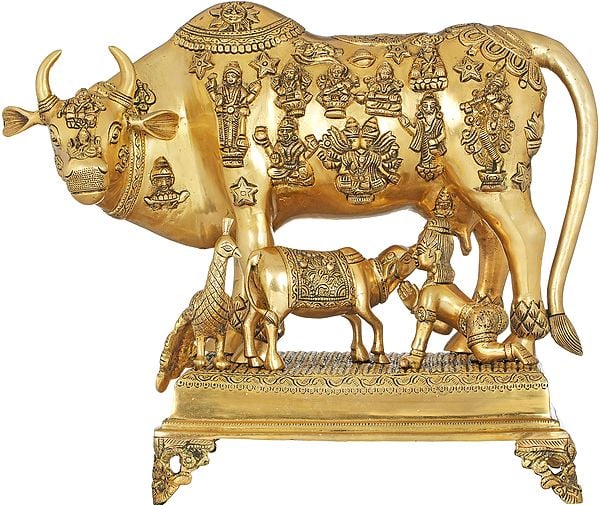 $896.25$1195.00  [ 25% off ]
The cow is the very picture of all that India has traditionally valued - purity, selflessness, and resourcefulness. She consumes little, yet gives generously of what she has. She may live in the least-scrubbed of gaushalas (cow-sheds), off old hay and vegetation; yet just one of her is enough for a family to thrive on. Her fertile udders yield the purest of milks and butters. Even the wastes she gives off are rich with nutrients that enrich the medium we grow our food (crops) on, properties that benefit and arguably heal our bodies. The colour of the cow is as pristine as her maternal nature. She feeds the babies of the ungrateful human with as much fervour as she feeds her own calves. The cow has been revered in the subcontinent since her pivotal role in the days the Sarasvati Valley Civilisation flourished. It is of little wonder then that the peoples of the subcontinent venerate her as one would a senior member of the family, and consider gauseva (service of the cow) one's sacred duty.

This is a powerful work of art that could serve to overpower vastu-dosha in modern-day spaces. No matter the inconducive influences that beset your space, they have no power over the blessing of the cow. In this composition, the naturalistic musculature of India's most-loved pashu (animal) has been finished with a great degree of skill and a keen sense of aesthetics on the part of the brassworker. She stands with her head tilted sideways, while a calf and Gopala Himself nourish themselves at her teats. She has been bedecked with jewellery at her neck, horns, hump, and rump. Her limps are strong and concludes in a set of flawlessly sculpted hooves. Her tail is thick, the strands on its tip caresses her hooves. Numerous devas and devees of the Indian pantheon have been engraved on her skin in order to indicate that in her resides the entirety of Hindu divinity. The beauty of detail in each one is best observed by zooming in. The whole composition rests on an engraved pedestal resting on vine-clad legs. Note the peacock along the edge of the same that seemingly totters about the cow with its plumage down.