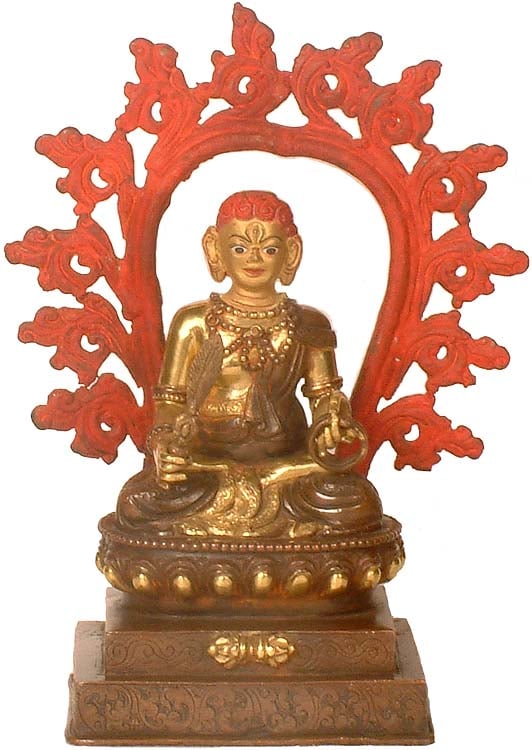 $295.00
Notify me when this item is available
Save to Wishlist Send as E-card Share by Email
The Vidyarajas (Japanese Myo-o) are kings of mystic or magical knowledge symbolizing the power and the victory of the five Jinas over the passions and desires. They are wrathful (krodha, Japanese funnu) emanations of the Jinas and of their servants. They possess the knowledge and force contained in mantras. According to another explanation, they are also 'irritated forms which the energy of the adept himself assumes on meeting obstacles'; these deities with an irritated expression 'demonstrate the wrath of the great compassion which brings to beings the succor of the Good Law.' In Japan they are also named the Daison Myo-o (great and venerable kings of magic knowledge). In India and in the Hindu pantheon, they are represented by the Bhairavas ( the 'terrifying') and the Krodharajas, or kings of wrath who devour flesh.

Their cult was introduced from China into Japan by the followers of the Shingon sect. Initially considered as esoteric deities, they were popularized, probably from the thirteenth century, the monks ascribing to them the power of protecting humans against the evil influences coming, according to an ancient Chinese belief, from the Kimon (in the north-east) or the 'gate of demons'.

Achalanatha also known as Fudo-Myo-O in Japanese, and Budong Fo in Chinese, is believed to be a manifestation of the Dhyani-Buddha Vairochana for the purpose of combating evil. He is believed to be the chief of the five Vidya Rajas.

His appearance is fierce and angry, face menacing, his brows knit together, and expression one of grimace. He is described in many sutras and particularly in the Mahavairochana-sutra. His symbol, the vertically held sword aids him to combat the 'three poisons': greed, anger and ignorance. In the left hand he holds a lasso (pasha) to catch and bind the evil forces and to prevent them from doing harm. Achalanatha, having taken a vow to prolong the life of the faithful by six months and to give them an unshakable resolution to conquer the forces of evil, is sometimes invoked in this respect as the 'prolonger of life'.