The Enchanting Devi Sarasvati Seated On Her Peacock 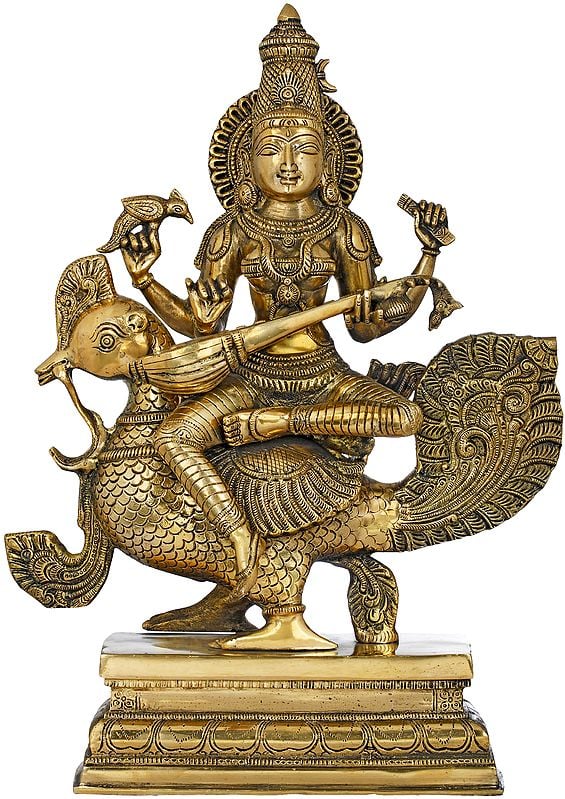 Saraswati is the Hindu goddess of learning, knowledge and creativity. She also guides the souls of the deceased to find their way in the afterlife. In the states of Bihar, west Bengal and Orissa, she is considered as the daughter of Durga, along with her sister Lakshmi and brothers Ganesha and Karthikeya. In Hinduism, she is worshipped not only for academic knowledge, but also for her divine knowledge required to achieve moksha.

Here she is represented with four hands where the left hand holds the veena (her instrument) and right hand plays it, symbolizing creativity and accentuates her concern for education as well as music; rear hands hold a book of wisdom and a parrot showing colorful splendor. She is sitting in a lalitasan posture on her sacred vehicle, Swan, immensely carved with proper minute textures symbolizing its ability to differentiate between good and bad. The snake (symbol of death) in Swan’s mouth shows, Saraswati’s control over death. Crown is formed like a temple with a divine flower shape aureole at the back, wears magnificent jewels and artistically patterned clothes adorned perfectly over her body. The smile on her face shows her positivity and the expression of her posture is flamboyant.