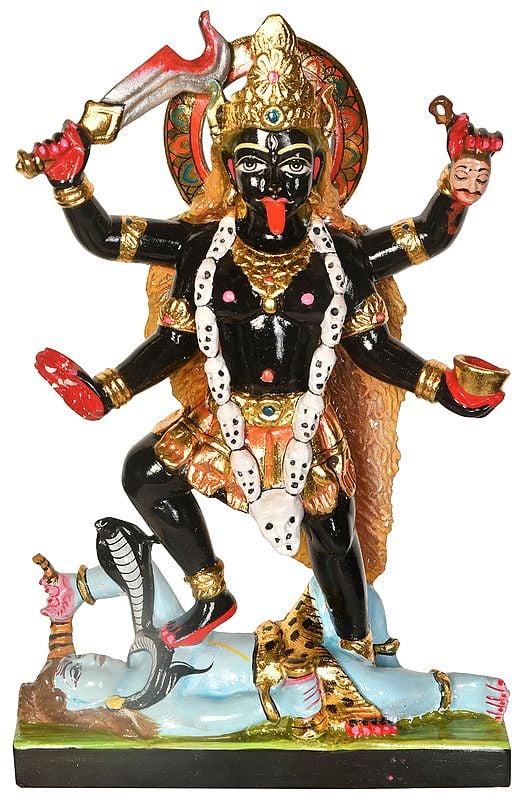 Goddess Kali is the quintessential embodiment of Shakti, the female power. She holds the most complex character in the entire Hindu pantheon, as she is both frightening and awe-inspiring; worshipped as the destroyer of evil forces relating to death, time, violence, sexuality and also a benevolent mother goddess of the universe. She complements to the destructive nature of her husband, Shiva, and it is always he who calms her.

Carved out of a single solid marble, Kali stands on Shiva’s corpse with her intoxicated eyes wide open, the tongue full of demon Raktabija’s blood, lolling out and her charming long golden hair dishevelled in her extreme ferociousness. It is believed that when she was lost in her victory dance, Lord Shiva lay down near her feet in-between the corpses to stop her, and she accidently stepped on Shiva, which made her come out from her trance and as a result her tongue protruded out of shame. Dressed in a small skirt of human hands and a long garland of skulls, she carries a blood-stained axe and a severed face in her rear hands, while the left anterior hand holds a cup of blood and right is placed in an elegant blessing gesture.

Zoom in to applaud the sculptor’s amazing work of art while depicting the clarity of Shiva’s features and the terrible and realistic expressions of goddess Kali along with the alluring lotus aureole behind her striking crown. The carver has used an apt color depiction of black body, as Kali is mostly associated as being dark with the red palms highlighting her thirst for blood.