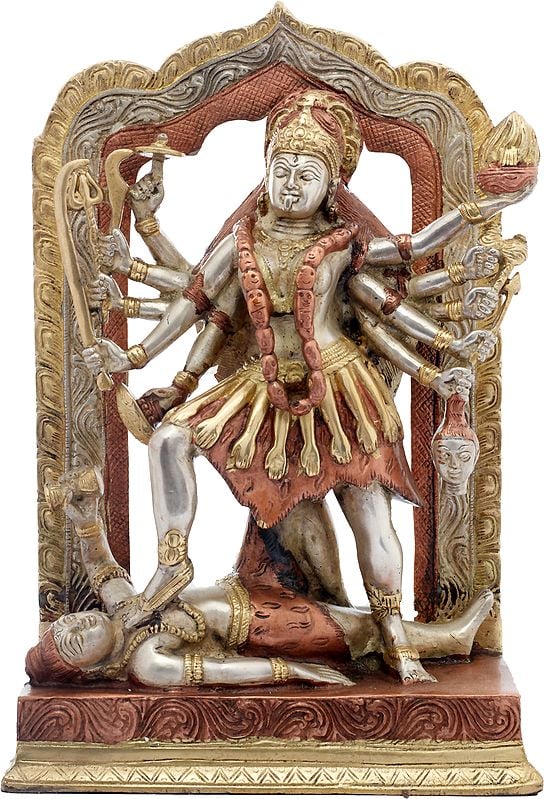 $272.80
$341
(20% off)
What sets this Dashabhuja Kali apart from other, more imposing depictions of the Devi, is the aureole. The grandeur of this thrice-layered aureole is no less than a seeming temple for the murti in the foreground. A layer of thick, gold lotuses; followed by a coat of silvery, lifelike waves; supported by undulating, criss-cross patterns.

The symbolic meaning of the ten arms (in Sanskrit, 'dasha' means ten and 'bhuja' means arm) is significant. The Devi multitasks in an effort to attend to each of Her devotees. Note the sheer variety of weapons she weilds against the adharmis of this universe. In Her many hands She also holds the dharmic chakra (topmost hand to the right), which stands for the cyclical nature of dharma as propounded in Hinduism. In another, She holds the adharmi She has slayed, characteristically by the tuft of his tresses.

Ma Kali's stance is powerful. The musculature of each of Her limbs, Her straight-drawn torso, the ferocious composure of countenance with the tongue heaving out, give away Her divine bloodlust. The mundamala, which is Sanskrit for garland (mala) of heads (munda) and is symbolic of the Sanskrit alphabet, has been sculpted to conceal Her breasts, while a skirt made of the severed hands has been sculpted over Her loins, (the severed hands constitute an offering of the fruits of one's karmas performed by hand).

The shining gold and red of Her ornaments complement the smooth silver of Her skin. Two gold necklaces descend over the undulations of Her torso. Chunky amulets and wristlets in complementary colours are on each of Her arms. A broad kamarband made of gold holds in place the only piece of garment on Her form. Elaborate gold anklets caress the length of Her feet, one of which is balanced on the toes upon the chest of Her husband, Shivaji himself.

A supine Shivaji lies beneath Her with a knee raised. He is in baghambar ('bagh' is Sanskrit for tiger, 'ambar' for cloth) and holds up the damru, without which His iconography is incomplete. He lies on a pedestal that has been carved with curvaceous waves on the topmost layer and templetop triangles at the base.