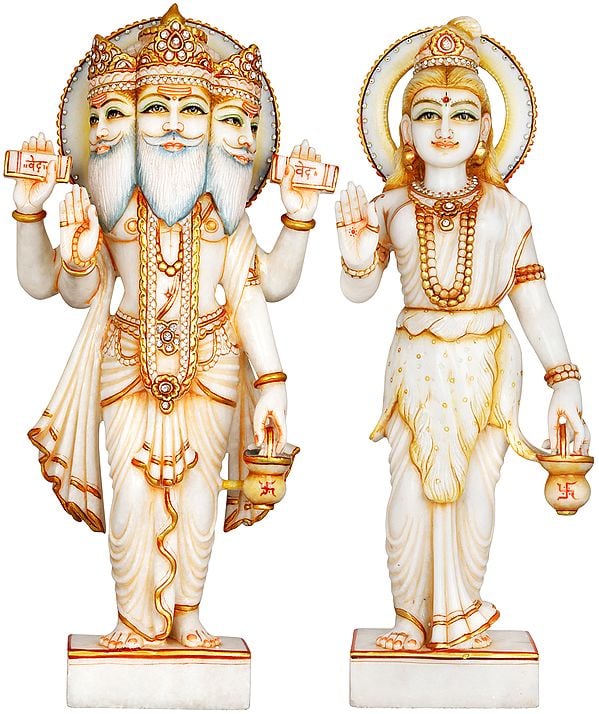 FREE Delivery
Only 1 available
$2246.25
$2995
(25% off)
Instantly recognisable from the four heads symbolic of the four cardinal directions, Lord Brahma is the presiding deity over srshti. Srshti is the name given to the process of creative projection, and Lord Brahma is the first of the Hindu trinity of Lord Vishnu (who preserves) and Lord Rudra (who annihilates). His four heads and long beard give Him the appearance of a cosmic sage; indeed, without wisdom and knowledge srshti would not happen.

The set of murtis that you see on this page depicts Lord Brahma next to Devi Brahmani, His functional twin in the grand scheme of things. She is one of the saptamatrkas (seven maternal deities) and a manifestation of Devi Sarasvati, wife of Lord Brahma and the presiding deity over learning and the fine arts. She is His complement and indispensable to srshti; without Her, He would not function.

The handsomely sculpted divine couple would be a valuable addition to the space of any devotee. Mounted on simplistic marble slabs as pedestals, it depicts Lord Brahma as chaturbhujadhari (four-armed) - note the copies of the Vedas in His posterior hands - and Devi Brahmani as dvibhujadhari (two-armed). The medium of soft, white marble befits the traditionally curvaceous shapes of both the masculine and the feminine forms in Hindu iconography. Kamandalus in both their hands, cihna (sign) of asceticism, in addition to the tigerskin girdle on Her waist.