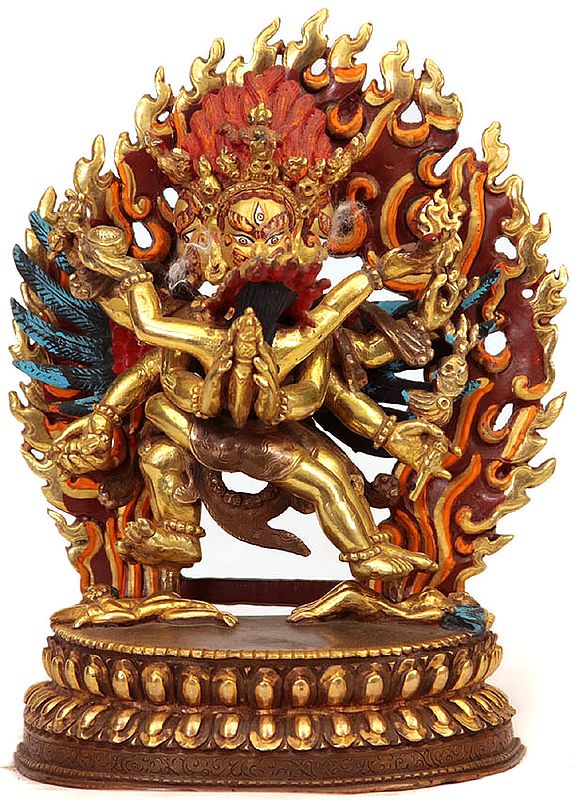 $495
Quantity
Notify me when this item is available
This sculpture represents the extremely important archetypal deity called Vajrakumara or Vajrakila in Sanskrit, and Dorje Phurpa in Tibetan. This god is a personification of the ritual implement phurpa. He is particularly important for the Nyingmapas, who invoke him in the higher yogic praxis called Mahayoga or Anuttara. His other important role is in helping Padmasambhava, for whom he pins down the enemies of the Dharma with the blade of his phurpa, whereupon Padmasambhava then tames and converts them to the service of Buddhist Dharma.

Typical of heruka, or heroic deities, Vajrakila has three heads and six hands, as also the wings of Garuda. With his two principal hands he holds the phurpa, ever ready to plunge it into enemies. In the two additional right arms he holds two dorjes. The upper left holds a flame while the lower hand holds a Tantric staff. His consort holds the ubiquitous chopper and skull cup. He has four legs while she has the normal two. Together, they trample upon smaller figures, even while engaging in a passionate embrace in the militant posture (pratyalidha).

This sculpture was created in the city of Patan, Kathmandu. The sculptor is Shri Madan Prajapti.