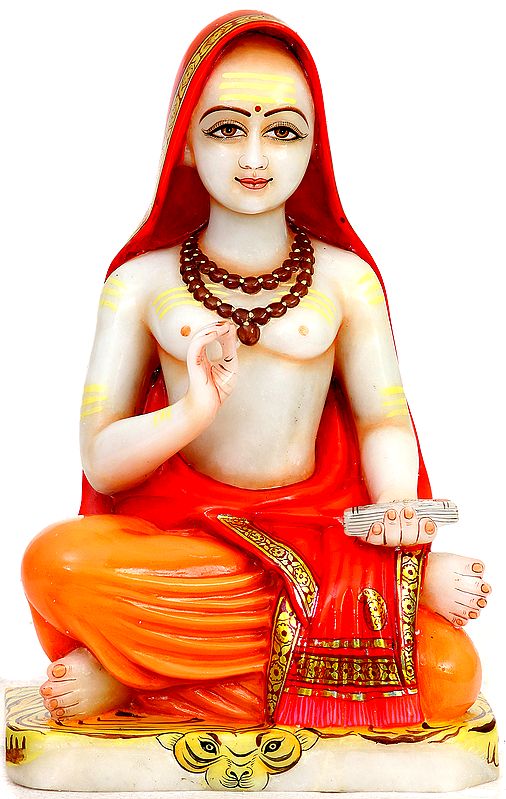 Free delivery
This excellent statue, sculpted from a pearl-like luminous finely grained white marble rare in its lustre, pulsating with the vigour of life, represents the great spiritual and philosophical preceptor of India, Shankara or Shankaracharya, worldwide honoured, for centuries now, as ‘Jagad-Guru’. The date of his birth varies in various biographical sources by about thirteen hundred years, the earliest being 508/9 BC, and the latest, 788 AD, of them 788 AD being more acceptable. However, there is strange uniformity in regards the short tenure of life : barely thirty-two year, not even the age of full youth. The sculptor in conceiving his image has focused mainly on this young age-aspect of the great sage. A sage or anchorite by ensemble the statue portrays him in the early years of his youth almost in his boyish days.

Whichever the date of his birth, Shankaracharya was born in a Nambudiri Brahmin family of the village Kaladi, or Kalati, the present day Kalady in Kerala. Kaladi was situated on the bank of the holy river Periyar, also known as Purna or Churna. Shankaracharya’s father’s name was Shivaguru, and mother’s, Aryamba. They belonged to old Nambudiri caste. Initially, Shivaguru and Aryamba were childless. They many times visited Vrashabhachala, a close-by mountain peak, and made offering to Chandramaulishvara, a form of Lord Shiva, enshrining a temple at Vrashabhachala. After long, their prayer and supplication bore result and with the blessings of Shiva the Nambudiri couple had a son. His horoscope was interpreted as indicating that the child had a short life tenure but it would have such glory as takes many births to attain. Both, Shivaguru and Aryamba were deeply religious persons and this had deep influence on the mind of Shankaracharya.

When Shankaracharya was yet a child, his father died leaving him in his mother’s care. The death of his father was his ever first lesson in philosophy. He realised the futility of life and decided to renounce the world and spend his days as a sanyasi – anchorite. He knew that the disclosure of his intention would completely shatter his mother and knew not how to disclose it to her. However, a chance incident eased his problem. One day, when accompanying his mother he went to a reservoir and began bathing in it, a crocodile caught his leg and began dragging him into its jaws. An undisturbed Shankaracharya told his mother all about it and said that he would prefer dying as a sanyasi, and if she permitted he would take to sanyas before the crocodile swallowed him and had thus the death of a sanyasi. With no option left, she permitted him for it, though strangely the moment he took the vow of sanyas, the crocodile left his leg and disappeared into the water. Now the mother could not take back her permission, not Shankaracharya, his vow. At seven Shankaracharya was a sanyasi.

Now he looked for a Guru that he found in Govindabhagavatapada. He proceeded to meet him but before he was there, Govindabhagavatapada knew by his divine vision all about him. After initial education he sent him to several places including Kashi – Varanasi, had discussion-sessions with learned ones there. He defeated all, though his conquest over Mandan Mishra, the most learned giant of those days, was widely talked about. However, the matter did not end in defeating Mandan Mishra alone. His wife Bhartidevi challenged him to defeat her too. She was a well-versed lady. Shankaracharya replied all her questions but then she put before him a few questions in regard to sexual love of which Shankaracharya had no experience and hence could not reply. He, however, sought from her some time. He then leaving his body with his disciples for its safe upkeep entered into the body of a king who had died right then and in his new body he had the experience of sexual love. Having so mastered the art of sexual love he returned into his original body and then to Bhartidevi and replied all her questions.

The statue portrays the great sage as interpreting his point with the gesture of his right hand, while the left has been represented as holding a book suggestive of scriptures that Shankaracharya had produced. He has been sculpted as seated on a tiger skin, the usual seat of anchorites. His deep saffron antariya – lower wear, and a red uttariya – upper wear, are characteristic ensemble of a Hindu saint. A saint in the Shaivite line, he has on his forehead a ‘tri-punda’ mark, and on his neck, a lace of large size stone beads. Seated in cross-legged posture, the face, his deep large eyes and the contentment enshrining it, reveal deep absorption.