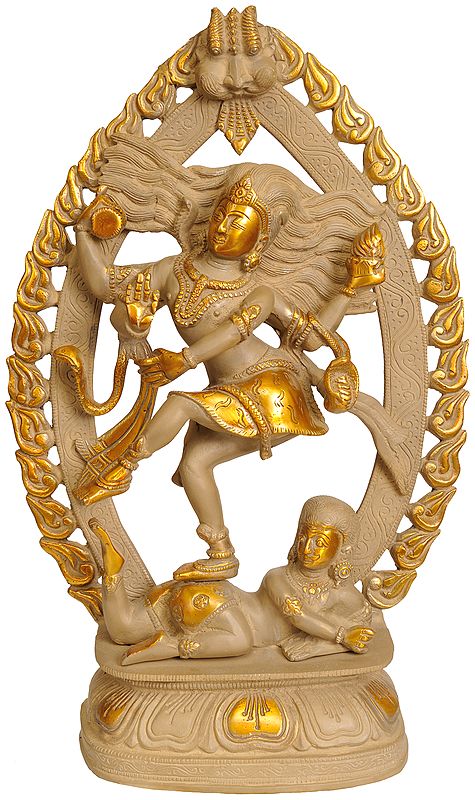 $148.05$329.00  [ 55% off ]FREE Delivery
Lord Shiva, in his guise as Nataraja, is Shiva's form as a cosmic dancer in a circle of fire, which represents his triple role as creator, preserver, and destroyer. A particular dance associated with him "Ananda Tandava" translates to "Dance of Bliss;" "tandava" means "the fierce dance" and "Ananda" means "bliss," the two words together imply the idea of a paradoxical dance which begins in fierceness and then transformed into one of bliss.

Shiva is depicted as a four-armed figure dancing within a ring of fire, with his right leg raised and gently crossing in front of the body and his left foot firmly placed on the body of a dwarf. Shiva's back right-hand holds the damaru, and the front right hand is in the Abhaya mudra. The back left-hand carry Agni (fire) in a vessel, and the front left hand is held across his chest in the gajahasta, with wrist limp and fingers pointed downward toward the uplifted left foot. His figure is encircled by a ring of flames, the prabhamandala.