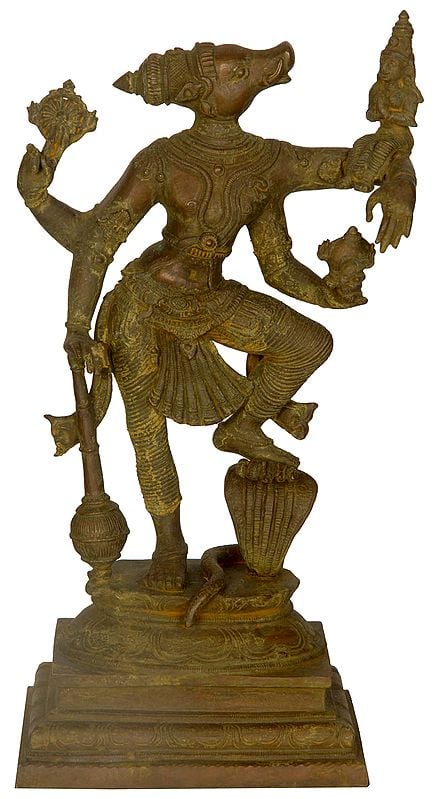 $895
A raging boar rears its head from Vishnuloka and charges straight for the bottom of the sea. It has the stamina of a hundred thousand boars and it fights the despicable Hiranyaksha who had brought down the earth (bhu) to the bottom. Legend has it that the otherwise invincible Hiranyaksha was defeated in ten years’ time, upon which the boar restored the earth all the way back to sea level on the sheer strength of its tusks. That boar is Lord Varahavatara Vishnu.

In Sanskrt, ‘varaha’ stands for boar and ‘avatara’ is the word for manifestation. The Lord Varaha composition that you see on this page is a manifestation of none other than Lord Vishnu Himself, and the overpowering of Hiranyaksha is a fulfillment of the role of the deity of existential preservation. The chaturbhujadhari (four-armed) Lord Varaha bears a weapon and the cosmic symbols that are associated with Vaishnavite iconography. In one of His left arms sits the rescued Bhudevi, the very roopa of Vishnupriya Devi Lakshmi.

Zoom in on the superhuman strong and virile form of Lord Varahavatara Vishnu. Fashioned from bronze, the same is overlain with a world of divine adornments that start from the crown on His head to the jewels on His limbs and torso. Finally, the iconography of the graceful Bhudevi has been kept intact despite Her being a fraction of the whole composition in terms of scale.