$395
Quantity
Notify me when this item is available
This bronze is a model of the holy Stupa, the earliest form of Buddhist architecture. The Samskrit word 'stup' meant in ancient times a heap of earth, or a mud-mound. In Buddhist context a stupa meant a mound where lay buried Lord Buddha, a Buddhist monk or any of Buddha's followers. Thus, initially in architectural terms a 'Stupa' did not mean anything more than an unfinished natural heap of earth. But with the advancement of time when the 'Stupa' came to be the object of popular worship, the ordinary natural mound became an object of veneration and hence inspired people for finishing it gracefully and for its better protection.

Thereafter the mud-mound began to have some kind of shapeliness and usually a peripheral wall around it. People seem to have started paving the mound with stone slabs in its natural hemispherical shape for protecting it from erosion, and incidentally thus developed the hemispherical dome form of a stupa. The peripheral wall with gates usually on all four sides was included with the structure both for protection and embellishment. The top of the dome, which also constituted its pivot point, where-under lay the remains of the person buried there, was surmounted by an umbrella type kiosk. Later the stupa architecture underwent a lot of changes. The single umbrella was multiplied by a number of them and the hemispherical dome was now spiral. The dome now had a decorative and well defined base and in addition often a separate plinth. The entire structure, instead of the earlier flat one, was now spiral.

Lord Buddha had prohibited his idol worship. Hence for some five hundred years after his death motifs like the Bodhi tree, Stupa, snake etc. alone were the objects of Buddhist worship. The Stupa was most popular as it was supposed to house the remains of the Great Master. Hence, there developed the votive models of Stupa at an early stage and such models were carried by Buddhist monks from one place to another as holy idols, to be gifted to the Buddhist commune there and to friends and followers of Buddhism. Most of the ancient stupa sites, such as Damek in Samath, also have smaller Stupa structures. These might be the structures surmounting the burials of subordinate monks. But, these might also be the votive pieces brought or sculpted locally by devotees visiting the site for paying their homage to the dead lying there. Thus the cult of votive stupa began prevailing in Buddhist tradition soon after the Great Extinction of Lord Buddha and is yet in great prevalence.

This bronze is a votive stupa motif developed on the model of the ancient Dhamek (Sarnath) Stupa pattern. This bronze is more characteristic of Ladakh and Tibetan Buddhist art traditions, where such votive pieces are created both in clay and metals and are used as gifts to friends for their well being and to temples and monasteries as marks of their reverence and devotion. Such votive motifs, due to their smaller sizes, do not have all specified or traditional ingredients of a stupa, however, they are usually very rich in their embellishment. The Tibetan models have the motifs of sun and moon, besides a finial, surmounting the top of the structure. The domes in them are usually ribbed and recede towards their necks. On their square plinth and square multi-layered base they have an elongated round neck rising spirally and getting narrower while rising to conciliate with the neck of the dome. On each of all four sides such votive stupas have a niche with the image of Buddha or Boddhisattva. This votive stupa has only on one side a single niche, though it is suggestive of niches on all sides, but it characteristically enshrines in it the Bodhi tree instead. It suggests that it is based on early stupa models and preserves the initial tradition. . 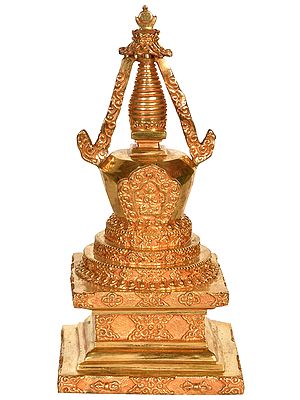 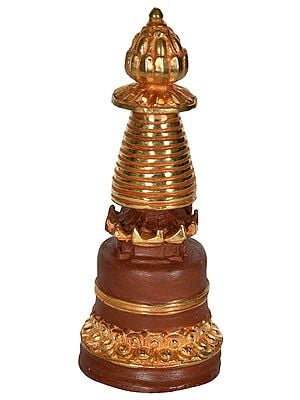 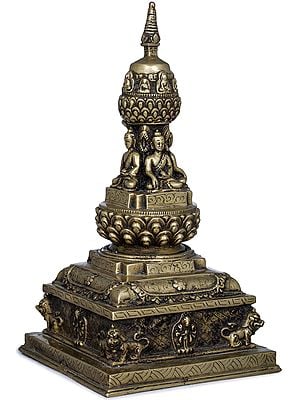 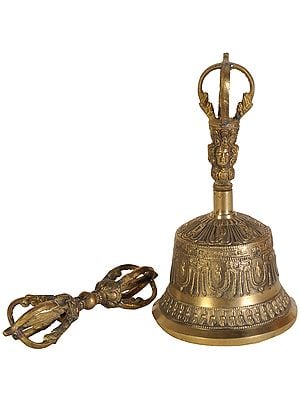