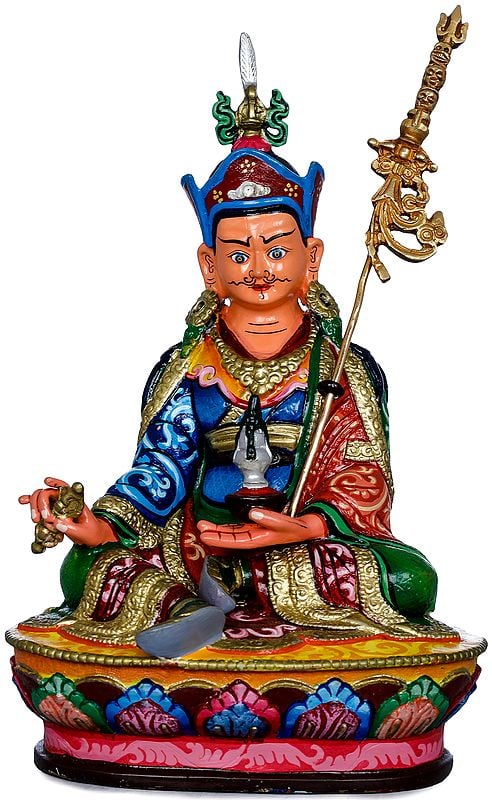 (Made in Nepal) Tibetan Buddhist Deity Padmasambhava or Rin Poche

Guru Padmasambhava was a divine manifestation of Lord Shakyamuni Buddha. He was said to have incarnated as a fully enlightened being from a lotus, hence was also referred to as ‘Lotus-Born’. He was a tantric guru who played a major role in transmitting Vajrayana Buddhism to Bhutan, Tibet and various other neighbouring countries, where he was popularly revered as Guru Rinpoche (Precious Guru). This copper sculpture of Guru Padmasambhava is crafted in its beauty by the expert sculptors of Nepal, where Buddhism and Hinduism are the two major influencers of its sculptural art style. The entire sculpture is painted in bright colours, keeping into consideration his iconic colours of the multiple layers of robe along with a smooth and glossy texture that attracts the viewer’s attention.

Shakyamuni Buddha, before his mahaparinirvana, had already predicted the coming of Guru Padmasambhava with a statement that, “Padmasambhava will be even more enlightened than himself”, indicating towards his importance and him being already born as ‘the awakened one’. The deity sits here in his comfortable posture on a lotus pedestal symbolic of him being emerged out of it and holds a five-pronged vajra in the right hand and left rests in a gesture of equanimity holding a vase of longevity filled with the nectar of deathless wisdom. The khatvanga, a danda, cradled in his left arm has the severed heads denoting the three kayas (the three bodies of a Buddha: the dharmakaya, sambhogakaya, and nirmanakaya), crowned by a trishula and dressed in a sash of the five pure lights of the Mahabhuta.

The sculptor has restricted to the amazing combination of blue, red and green colours in the sculpture along with lavish floral decorations in gold for the border, choker necklace and large kundals. He is veiled in layers of a dark blue mantrayana tunic, red monastic shawl decorated in exotic flower patterns and a maroon kingly robe in silk. A similar colour shade is formed for his petalled lotus crown. Zoom in to the face for the captivating pierced gaze of his wide-open blue eyes along with the wrathful and smiling expressions also highlighted with the magnificent carve of his eyebrows and moustache.