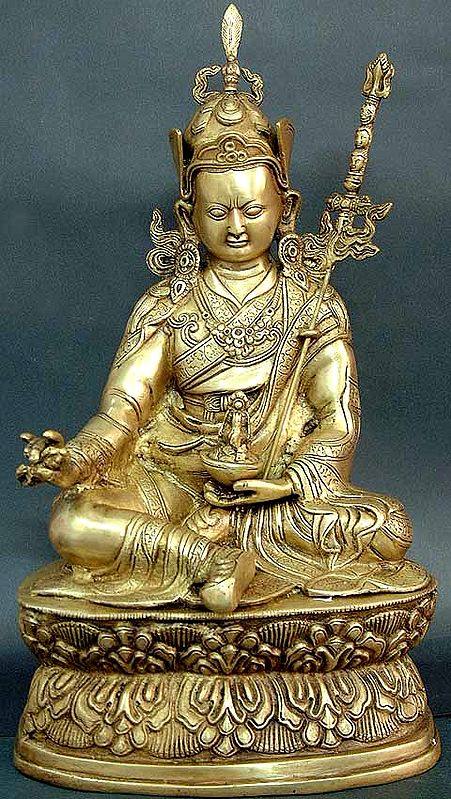 $240
In Buddhism, Padmasambhava is a Tibetan religious teacher. His name means lotus-born, however, he is widely referred to as Guru Rin Poche, which means 'precious master'. He was an 8th century Buddhist master from the Indian subcontinent. He is also known for helping in the construction of the first Buddhist monastery in Tibet at Samye and is revered as the second Buddha by the Tibetan Buddhists. He is also regarded as the first person to introduce tantric Buddhism in Tibet.

Here, Padmasambhava is potrayed as an alluring gold-brass sculpture. The splendour goes beyond expectations as the grim facial expression of the Buddha is finely carved over the delicate statue with utmost expertise. The gold-jagged trident rests on the jewel laden shoulder of the Buddha as he meditates, enwrapped in a magnificently embroided toga creating an entrancing effect on the mind.

The Vajra guru mantra is held to be a powerful mantra by the grace of Padmasambhava who enlightened the beings through it. He is also known for the "seven line prayer to Padmasambhava", which is recited daily by the people of Tibet who practice the religion. He is incarnated as a fully enlightened being whose primordial wisdom attracts sentient beings. Tibetan Buddhism would not be the same if it were not for Padmasambhava.