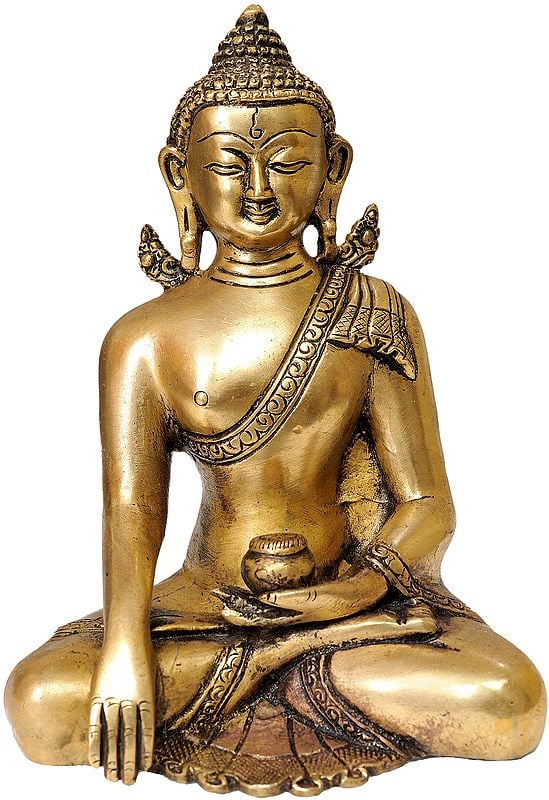 $135.00
Padmasana is the king of the four classical dhyanatmaka (seated-contemplative) asanas. It is the most difficult asana to assume - in fact, every other asana expounded in the ancient texts are directed at achieving perfection in padmasana. When you observe carefully the stance of the Buddha you see on this page, you would note that the knees-and-ischial tuberosity trifecta are in firm contact with the ground beneath Him and His heels are gathered directly below the navel. Sustained for an eye-watering duration of time at a stretch, this is indeed the padmasana of the true yogi.

The Buddha is at the juncture of Enlightenment. He has spent years, if not decades, at the foot of the Bodhi tree. He has attained to a multitude of samadhis (deep contemplative states) and is now bordering on Buddhahood. Note the gathered brow, the half-shut eyes, and the relaxed mouth. The lobes of His ears graze the shoulders, from which emerge a pair of wings indicative of the high levels of samadhi through which His mind is traversing. With the mendicant’s bowl lying unused in one hand, He reaches down (sparsha) to the earth (bhoomi) with the other for it to witness the transition.

From the beauteous musculature of the Shakyamuni to the lifelike drape of the unstitched robe, this Buddha statue is a fine example of skill, attention to detail, and artistic devotion.