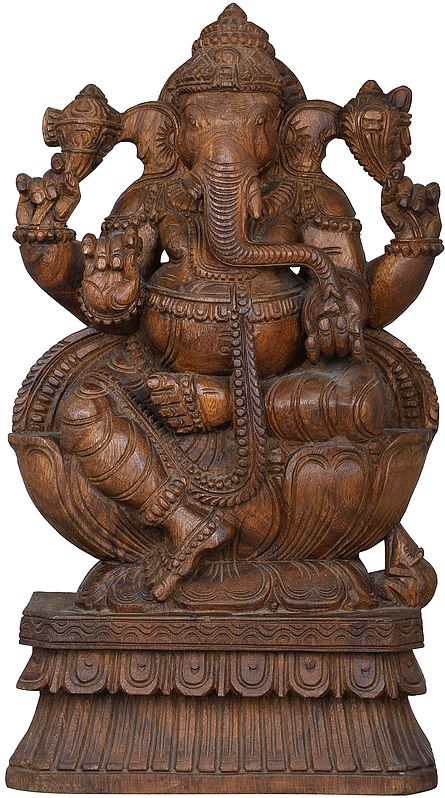 $375
Very little of the wooden superstructures of Southern temples has survived the ravages of time. From the little that could be found in the hinterlands, modern-day artisans have developed a contemporary sculptural tradition. A fine example of the same is to be seen on this page, a seated Lord Ganesha that would have likely graced the exterior walls of an ancient temple of the South. Note how replete the work is with traditional elements of His iconography.

From the serrations on the trunk and the tattoos on His ears to the detailed shringar and the folds of His dhoti - each aspect of this work has been sculpted in wood with the highest order of skilled handiwork and precision. A large lotus in full bloom constitutes His throne, which itself is placed on a pedestal carved with lotus petals. Note the Shaivite tilak beneath the close-set crown, indicative of His parentage, and the expression of innocence and wisdom in His lifelike eyes.

The Lord is seated in lalitasana. He is chaturbhujadhari (four-armed), bearing the divine elements of conch and lotus and laddoo. No Ganesha murti is complete without the laddoo, which is as integral to His iconography as His vahana the mouse itself. He takes great pleasure in the Indian sweetmeat, which explains why most of the offerings made to Him by loving devotees are of homemade laddooes.