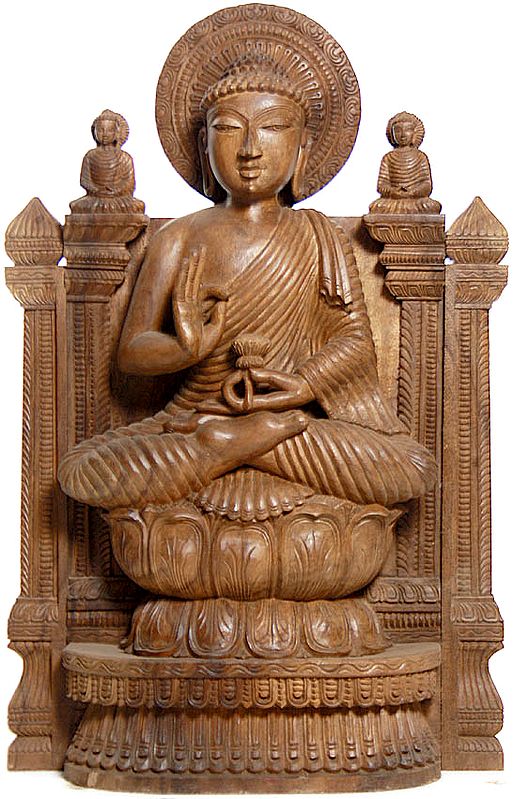 $1800
FREE Delivery
This item can be backordered
Time required to recreate this artwork
20 to 24 weeks
Advance to be paid now
$360 (20%)
Balance to be paid once product is ready
$1440
Notify me when this item is available
This wooden image of Lord Buddha, representing him primarily in preaching posture of his classical iconography but also blending with it his iconic form as Bhaisajya-guru, popularly known as Medicine Buddha, is a splendid example of great craftsmanship. The statue is unique in revealing in the beauty of form rare spiritual simplicity. The image seems to melt out of gold, not carved from wood, yielding its luminosity, all its gentle expressions, refinement, fluidity of lines, plasticity and transcendental quality combined with perfectly balanced anatomy and warm sensuousness as revealed the great traditions of the Buddhist art. In subtlety of expression, discovering details of various parts : drapery and ‘vedika’ in particular, and in its firm yogi-like seating posture the statue is close to Buddha’s fifth-sixth century Sarnath images.

With his right hand gesticulated in ‘vitarka-mudra’ – interpretive posture, the statue represents the Great Master as delivering sermon to his disciples. He led the ignorant mankind to the path of righteousness for some forty years, though for portraying this aspect of his life these are just two sets of his images that are often used : one, when he delivered his first sermon to his five errant friends at Deer Park in Sarnath, known in the Buddhist tradition as 'dharmachakra-pravartana' – setting the wheel of Law in motion, and the other, representing him as moving from one place to other teaching ignorant ones, an image usually designated as ‘Buddha, the Universal Teacher’. As the Buddhist texts and tradition have it, after he was enlightened and all knowing, he decided to share his knowledge with the world for its weal. He hence proceeded from the place he was doing penance and reached Sarnath where he encountered his five former friends who had deserted him. The divine glow on the Buddha's face led them to prostrate before him. Here at Deer Park Buddha delivered to them his ever first sermon and thus the wheel of Law was set in motion.

‘Vitarka-mudra’, which is a prominent feature of this image, is the essence of both classes of images, though while in the former case the Buddha is represented as seated, in the latter, as moving and hence standing. This image is hence close to the event of 'dharmachakra-pravartana'. The 'dharmachakra-pravartana' image essentially incorporates the icons of five disciples, anthropomorphic or symbolic, and the wheel-motif, carved usually along the rising of the pedestal under the Buddha-image, which being absent in this image disturbs the equation unless the five-petalled lotus is seen symbolising the five disciples by its five petals, and wheel, by its form and character for as moves the wheel of Law so gradually eject the petals of a lotus.

The gesture of the left hand is, however, more disturbing. In both sets of images, representing 'dharmachakra-pravartana' and ‘Buddha, the Universal Teacher’, both hands are delineated in ‘vitarka-mudra’, not the right alone. Here in the left hand placed on his lap the Buddha is holding a lotus flower in the style as Buddha, the Bhaisajya-guru holds his pot believed to contain all curing herbs. With its well composed petals the lotus assumes a pot’s form. Hence, the statue is partially also the representation of Bhaisajya-guru or the Medicinal Buddha. Thus, though rendered pursuing standards of the Buddha’s classical iconography, the statue presents a blend of at least Buddha’s two forms, the Buddha, the Teacher, and the Buddha, the Curer. Interestingly, the statue has installed on the columns’ tops on either side miniaturized images of the Buddha flanking the principal image above the shoulder-height. Such tiny Buddha icons are usually the part of the Bodhisattva iconography, something which further enhances the dimensional breadth of this Buddha-image.

Thus, the wood-piece represents primarily the Buddha as teacher. His image enshrines a lotus seat installed on a podium consisting of conventionalised lotus-motifs. An exquisitely incised half ‘vedika’ consisting of four as elegantly carved pillars and a back-wall houses the lotus-seat that the Great Master enshrines. The lotus, the Buddha enshrines, has been beautifully conceived. The glow that enshrines his face is born of the enlightenment, and sublimity and divine calm, of his great spiritual strength. Broad forehead, sharp nose, elegantly delineated lips, though pointed but subdued chin and half-shut lotus petal like carved eyes define the aesthetic beauty of his face. An elegantly pleated ‘chadara’ – long sheet of unstitched textile, not only covers his entire figure down to foot-joint, except the right half of the torso, but also lay folded on the figure’s left shoulder and left arm and spread on the pedestal under the Buddha-image.