The Princely Roopa Of Lord Ganesha 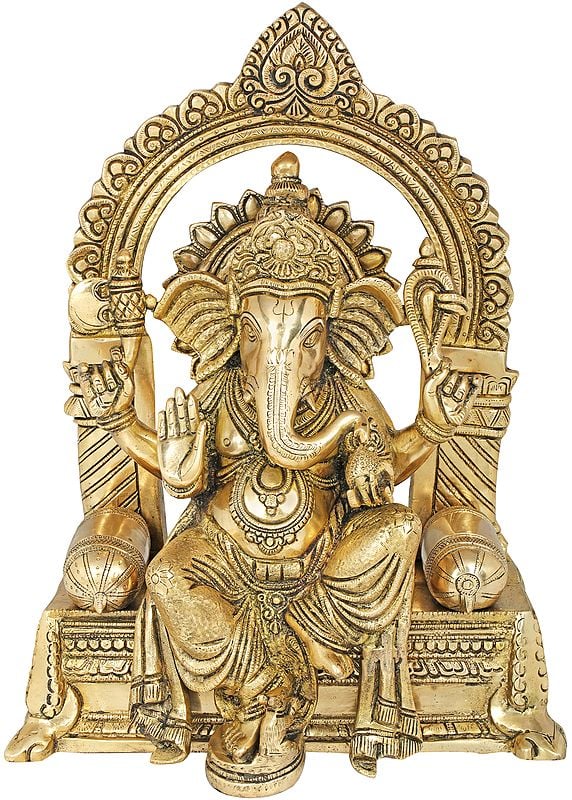 $476.25$635.00  [ 25% off ]FREE Delivery
Lord Ganesha, son of Shiva, prince of paraloka. In this one-of-a-kind Ganeshamurti, He is depicted in His heavenly regalia, seated on a throne grander than any in the mortal realm (ihaloka). It is a side of the elephant-headed deity that is not often the choice of devotional artisans in the subcontinent. Usually, He is the baala-deva (child-deity), the adorable son of Shiva-Parvati.

The wisdom and innocence associated with Lord Ganesha is intact in this composition. He is seated in a rudimentary lalitasana, the silken folds of His dhoti flowing about His limbs. His chubby child’s torso, plumped up from all the laddooes He keeps tucking into, is flanked by four arms (He is chaturbhujadhari - one possessed of four arms), each featuring an element of His traditional iconography, replete with one meting out blessings and another cradling a laddoo.

Zoom in on the elephant-face of the Lord to take in the solemnity of its composure. From the ornate crown sitting on His brow to the large flaps of ears on either side, each aspect has been carved with considerable precision and attention to detail. A solid diskette of lotus petals constitutes the Lord’s halo. Finally, the traditionally carved aureole emerging from the broad-based throne is like a temple housing the icon.