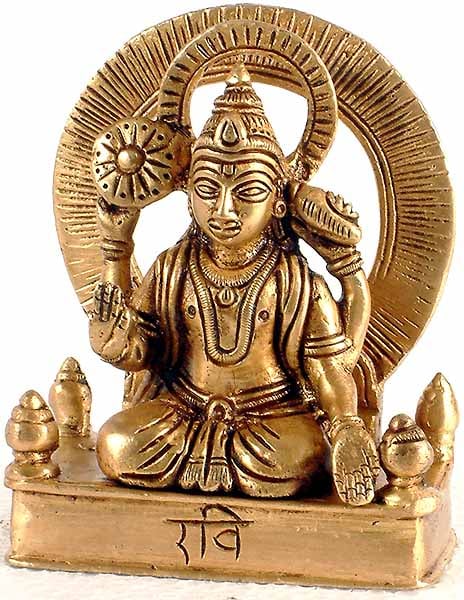 Ravi or the Sun (The Nine Planets (Navagraha))

$135
Quantity
Notify me when this item is available

Free delivery
This artwork represents the sun-god (Ravi), as one the Navagrahas (nine-planets). He is first in the list of the nine planets and is considered the lord of these planets. It seems that the present sculpture has been executed mainly for devotional and ritualistic purposes i.e. to appease the planet sun, so that one can remain free from any unfavorable influence of this heavenly body.

According to astronomy, the sun is a luminous celestial body around which the earth and other planets revolve and from which they receive heat and light. Sun has a mean distance from earth of 93,000,000 miles, a linear diameter of 864,000 miles, a mass 332,000 times greater than earth, and a mean density about one fourth that of earth.

All ancient cultures have always believed in the power of the planets and their ability to influence living beings. Though there are a number of planets in the universe, the nine planets are considered important due to their significant influence on the affairs of living beings on earth. In the course of time, all nine planets were deified and given a form, attributes and a vehicle.

There are numerous legends pertaining to the origin, characteristics, rituals, functions and adoration of the sun-god. His cult indeed is widespread. He is the central graha in the nava-graha mandala. In graha-yajna, his form is round, but he is also personified in human form with two or more hands, holding lotuses etc. and riding a splendid chariot to which seven horses are yoked. The chariot of the sun moves on a single wheel and his charioteer is Aruna, the elder brother of Garuda, the famous bird-vehicle of Vishnu. Traditions describe him (sun-god) as a brahmana or kshatriya caste, born in the Kalinga country. He has more than one consort, Usha, Sharanyu, Sandhya etc. Among his sons, Manuvaivavata and Yama are celebrated; the daughter Yami was twin to Yama. Sani and Tapti are his offspring from Chhaya.

Ravi as a planet effects the affairs of human beings. He represents courage, will-power, muscular strength and authority, and has domain over rulers. He has a preference for open places, hills and forest, metropolitan cities and famous places of worship. He is the lord of the east. The day, Ravivar (Sunday) is named after him. Substances favored by the sun are various fuels, hides, skins, wool, weapons, silk, gold, fire, poison, drugs and wheat. He rules over kings, doctors, administrators, herdsmen and male parents. Parts of the human anatomy over which the sun has control are  the head, heart and blood-vessels, bones, eyes, stomach, throat and spleen, blood pressure, cerebral disorders, eye trouble, diseases of ear, nose and throat. Tuberculosis and dysentery are ascribed to an offended sun. He is malefic and owns Simha (leo) as his house in the zodiac. Moon, Mars and Jupiter are his natural friends, whereas Saturn and Venus are his enemies. He is neutral towards Mercury.

Icono-plastically he has been represented in different materials, postures and gestures. The legs of the sun-god have never been finished. It is said that the feet of the sun-god were left unfinished by Vishvakarma, so no one anywhere fashions his feet and if it is done, it gives leprosy. Here he has been shown seated on knee on a throne. He has four hands: the upper right hand is holding a lotus, while the lower one is in the gesture of protection (abhaya). The upper left hand is holding a conch, while the lower one is in the gesture of charity (Varada). He is wearing a crown, necklaces, earrings, armlets, bracelets, waistband, scarf, and a dhoti (skirt). There are daggers attached to the girdle on the either side (not clearly visible). There is a halo behind the head. The figure has been cast against a mandorla.