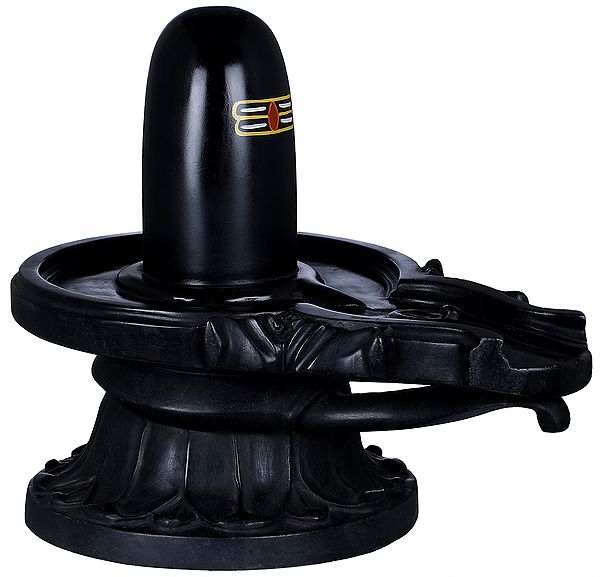 A Linga is the cult image of Hindu deity Lord Shiva and represents the cosmos and the creator of the cosmos as one. It is a representation of god’s existence and is found in Hindu temples as an aniconic form of Lord Shiva; it is intended to bring the shapeless unknown into our consciousness. The one shown here is sculpted out of a single piece of black marble stone in an elegant and smooth texture. In Shaivism tradition it is a short cylindrical pillar-like symbol of Shiva placed on a lipped, disked structure called ‘Yoni’ symbolic as an emblem of Goddess Shakti; this sculpture is a perfect union of masculine and feminine principles, and the totality of existence.

The Shiva Lingam shown on this page is sculpted in a glossy texture and a unique factor of being sculpted on an inverted lotus-like base that has its edges turned outwards. The cylindrical pillar at the top has a mark of Shaivite tilak in yellow and white and the centre in red depicts lord Shiva’s third eye. This Linga is a great sculpture to be kept in your prayer of worship or temple as an aniconic form of lord Shiva.