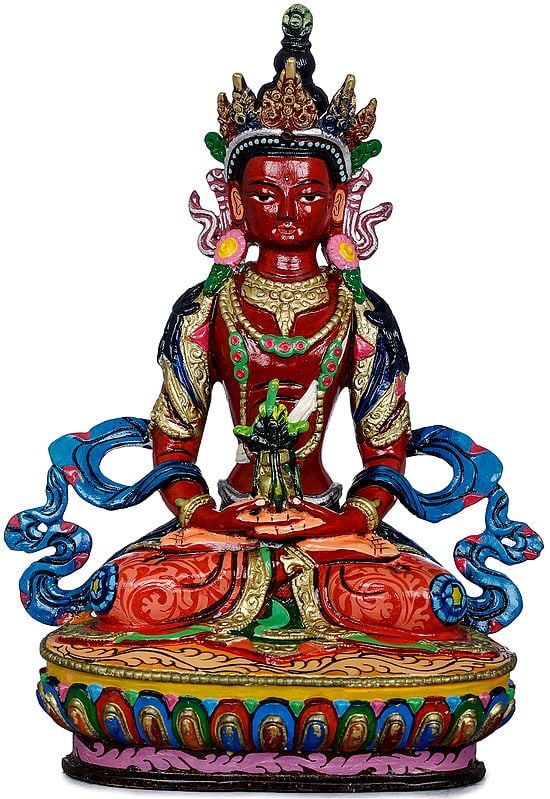 $359
Amitayus or Amitabha Buddha means the Buddha of Limitless Life. It's an aspect of Buddha, arising out of the story of the Bodhisattva Dharmakara, who after taking the famous forty-eight vows became the Amitabha Buddha. The legends promise a rebirth in the Pure Lands for anyone who recites his name with utmost sincerity and faith at the moment of his or her death.

This stunningly vibrant copper metalwork from Nepal depicts the Amitabha Buddha in a seated meditative posture, holding a kalasha (vase) in his hands. The vase, topped with leaves of the auspicious Ashoka tree, is a representation of Amrita, the elixir of immortality. It symbolizes a long life without the misery (shoka) of death and disease. On the top of the vase can be seen an alm's bowl, reiterating the non-materialistic nature of the depiction.

This colorful sculpture the Amitabha Buddha assumes the standard Buddha form, but he's shown in colors of striking red. He sits in padmasana, upon a lotus throne, like a divine king gazing upon his subjects. He wears the clothings and jeweled adornments of a celestial heavenly lord, in the style of the classical Indian tradition of divine aesthetics.