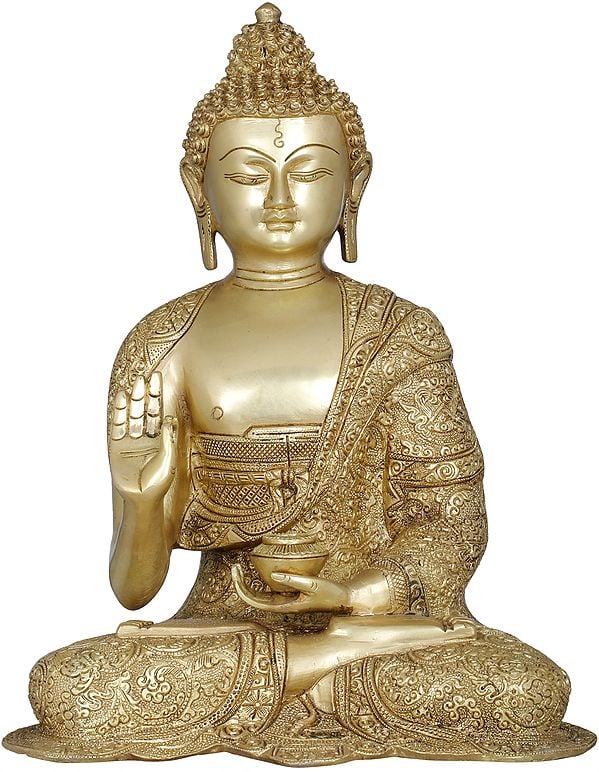 $345.00
A Buddha always teaches Dhamma, which means truth, the law of nature, which is universal. Dhamma can never be sectarian; Buddha instructs to observe the breath just breath, natural breath. It cannot be a Hindu, or a Muslim, or a Christian. Buddha's object of meditation is so universal. Lord Buddha interpreted a set of instructions for meditation that became known as the Satipatthana Sutta, or “Discourse on the Establishing of Mindfulness.” it means keeping something in mind—that is, continuously remembering the object you’re aiming to keep your attention on. So when a Buddhist teacher talks about mindfulness of the breath in meditation, for example—they’re talking about remembering the breath, maintaining your awareness on the breath. Because Buddhas appear so rarely for revealing the path to liberation (moksha) from suffering (dukkha), the manifestation of a buddha is considered a momentous event.

This most outstanding brass sculpture of LORD BUDDHA shown seated on a cushioned asana, the right palm facing outwards in a vyakhyan ( interpreting) mudra and gesture of granting boon and left hand holding the sacred spatra(begging bowl) on the lap symbolic of him being the highest of the order. the alluring draped robe in a single cloth flows evenly on his entire body and is filled lavishly with motifs of Buddhist ampicious & foremost symbols and mantras.

The lengthened earlobes signifying his ability to hear the sufferings of the world, the short & tight ringlet curled & matted hair locks on the head forming a conical top symbolizing getting rid of ignorance. The three divine shiva-lines on the Kanthika, closed eyes -means looking inward of self.this buddha carved in superfine expressions and scores with its beautiful qualities is the best piece to be kept at your dwelling or office to avoid disruptive elements.