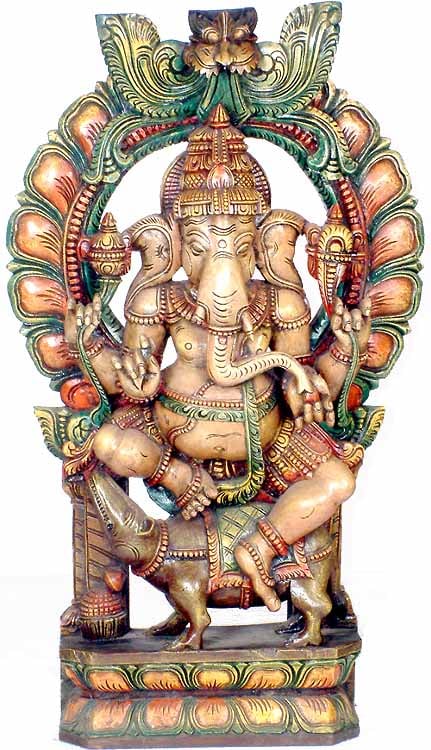 $1390.00
FREE Delivery
This item can be backordered
Time required to recreate this artwork
20 to 24 weeks
Advance to be paid now
$278.00 (20%)
Balance to be paid once product is ready
$1112.00
Notify me when this item is available
The gold complexioned four-armed statue, 35" tall and 21" wide, carved out of a single piece of teakwood and endowed with a marble touch giving it the child-like tenderness, closely resembles the classical Vijaya Ganapati form. This Ganapati image is equipped with the same attributes  goad, broken tusk, noose and a golden mango, which in the classical Ganapati iconography Vijaya Ganapati carries in his four hands. The Maudagalya or Mudgal Purana defines Vijay Ganapati as the victorious Lord who bestows success on his devotees. Mushaka, mouse, the highly resourceful being, that finds a way where even air can not pierce, is the vehicle of Ganesh, he rides it or not; but differently, Vijaya Ganapati rides it perpetually and fully exploits its unique resourcefulness. Symbolically, Vijaya Ganapati leads to aims and objects across impregnable barriers.

The gold complexioned Vijaya Ganapati radiates in darkness and thus what is dark glows with brilliance, that is, Vijaya Ganapati leads the darkness out and the light in. He is thus remover of darkness and harbinger of light. His essence is victory but wars, battles or violence are not his ways. His weapons are noose and goad; by the former, he holds evil to let the good prevail, and by the latter, he goads the erring ones to the right path. It is not just the picture of the external world. Everyone has within him a lot of good but the evil in him does not let it prevail, or obstructs its path. Vijaya Ganapati pierces his way into his being, holds the evil in him to let the good prevail and instead of annihilating evil, which is often endowed with tremendous energy, puts it to right path. Thus, Vijaya Ganapati leads to victory and success not by destroying evil but by channeling the devotee's entire energy, good or evil. In Indian tradition, mango symbolises fruition  spiritual and worldly, on massive scale; but mango-twig waits a year for a mango to ripe. Vijaya Ganapati carries the mango assuring that fruition of spiritual as well as worldly objects is certain but let it ripe in due course.

The artist has conceived his Ganapati image with a posture that corresponds to Lalitasana, a sitting posture that reveals ease and beauty of form. Suggestively, the prime concern of the iconography of Vijaya Ganapati is beauty and tension-free ease. Further, the artist has created his image with a big belly, though not as big as Ganapati has in his Lambodara manifestation and with floppy ears trailing down to shoulders. His partially shut and downward cast eyes depict a thoughtful demeanour. This gesture is further emphasised by the semi-vitarka-mudra, which his fingers reveal. All four hands carry various attributes, but despite, from his fingers the deity appears to be engaged in an inner dialogue.

This single tusked image of Vijaya Ganapati has crown of a moderate size and is as moderately bejewelled and costumed. As costume, he has just a loincloth, though elaborately adorned with beads and frills. Towards the backside the crown comprises a decorative disc, which radiates like a mini halo. It is, however, the Prabhavali, fire-arch, comprising lotuses and beads, which the artist has truly conceived as the halo around the great Lord. The Prabhavali rises from a pitha consisting of two rows of lotuses. Towards its right, the pitha has a basket full of modakas. Up to the waist height, the Prabhavali has vertical rise but then onward takes to a circular form, which on its apex transforms into a Shrimukha motif. For invoking Vijaya Ganapati the devotee is required to invoke first his Mushaka, and this he may do by commemorating the mantra : Aum Mushikavahanaya Namah.

to all international destinations within 3 to 5 days, fully insured.
Post a Query
Add a review