Alchi: The Living Heritage of Ladakh (1000 Years of Buddhist Art)

$100
Quantity
Notify me when this item is available

It gives me great pleasure to write these few words as a Foreword for Dr. Nawang Tsering’s monograph on ‘The Alchi: The Living Heritage of Laddakh’, being brought out on the occasion of the Golden Jubilee Celebration of the Central Institute of Buddist Studies, Leh, Ladakh with an exhibition on the Alchi Murals at the National Museum, New Delhi. I have had the pleasure of knowing Dr. Nawang Tsering for many decades, have watched his growth from a young lecturer to being the Principal of the Central Institute of Buddhist Studies, Leh. My own association with this region, as also specially the Institute, goes back to many decades. For me it was very gratifying to know that the Principal of the Institute has addressed himself to an outstanding and unique complex subject, today internationally acknowledged as Alchi Vihar.

Tibetan art has engaged the attention of scholars from different parts of the world. The scholars who have worked on the monasteries of Ladakh as also Lahaul and Spiti have focussed attention on the extraordinary creativity of the artistic expression. In this connection, naturally one recalls the name of Professor Tucci, who drew world attention to Tibetan Art, although he did not specifically speak of the monasteries of Lahaul of for that matter Alchi. David snellgrove wrote a monograph, which continues to be discussed in scholarly circles on the monasteries of Lahaul as also the sections dealing with Alchi. The two German authors wrote a monograph in German, specially on the sumtsek. This was followed by the work of Pratapaditya Pal in his impressive volume entitled ‘Alchi Murals’

Welcome as all this writing has been, informative, educative and analytical, from the point of art historians, the present volume distinguishes itself because it comes from the pen of a Ladakhi, who is a scholar adept in the textual literature and who breathes and lives the culture of Ladakh in its diversity and distinctiveness.

Dr. Nawang Tsering has briefly but succinctly outlined the artistic history of Ladakh, almost from the second century AD, going back to the time of Kaniksha to the complex relationships in the 17th century between Ladakh and Tibet, followed by the very creative and positive dialogue between the region of Ladakh and the region of Kashmir. Ladakh is no doubt part and parcel of the State of Jammu and Kashmir, but it is not sufficiently recognized that Ladakh had a very special history and culture, which was also simultaneously affected by the historical developments in Tibet, leading to the visit of Rinchen Zangpo to Kashmir, sent by Yeshe Od.

This history is inseparable from the repeated persuasion from the political power of Tibet to bring to their region scholars and monks from Nalanda and Vikramshila. Needless to mention the impact of the visits of Padmasambhava and Srijnana Dipankara, known as the famous Atisa.

Alchi, the modest architectural structure, built on soft ground, unlike the awesome monasteries of Ladakh, ascending tier upon tier from the rocks and mountains, is a jewel of some of the richest creative energies expressed in breath-taking beauty. Anyone who has visited Alchi and stayed there, as I have had the pleasure of doing a couple of times, cannot but be wonderstruck at the canonical, religious, ritualistic as also eclectic character of this visual world of forms. In Sumtsek arises Maitreya in the centre, 17 feet in height, flanked on either side by Avalokiteswara and Manjusri, each 14 feet in height. Every inch of the lower garment of Avalokiteswara is painted upon in the minutest miniature encompassing many worlds. Different but as impressive are the paintings of the garments of Manjusri and Maitreya. These massive tall figures, both as sculptural form and as painted figures, are supported by a wealth of murals which fill the walls. Each panel is a self-contained, ranging from royal scenes, popularly called drinking scenes, green and the blue Taras, the flying apsaras, acrobats and much else. There is a staggering diversity of genres, which leaves one with not only wonder but also impels one to ask many questions of art history still unresolved.

Quite different is Dukhang (assembly hall). Now, it is the world of Mandalas - Mandalas which are a visual narrative of a vast canonical literature. Despite the literature on the subject, these Mandalas continue to call for greater attention. The detailed analysis and interpretation of these mandalas could fill many more books.

Dr. Nawang Tsering's text, brief and concise, is extremely meaningful because he has been able to compress in a few pages the history, the cultural dialogue as also the uniqueness of some of the iconographic forms of these murals. The monograph has, been written as an introduction to the exhibition, which will be presented at the National Museum and subsequently in the Chhatrapati Shivaji Maharaj Vastu Sangrahalaya in Mumbai. I have no doubt that both the monograph and the exhibition will be enthusiastically received by all those who read the text and see the exhibition.

The Monasteries of Ladakh have been sanctuaries of Buddhist learning as well as repositories of Buddhist arts and artifacts, both imported and indigenously created. In ancient times when Kashmir was the Buddhist land, Buddhism reached Ladakh and, ever since Buddhism continues uninterruptedly there even after its disappearance from Kashmir and the setbacks it suffered in Tibet, the two main regions of Buddhist knowledge and arts in the Himalayas. The existing Monasteries of Ladakh fortunately possess hundreds of Buddhist artifacts from Kashmir and Tibet. The destruction of Bamiyan Buddha is still vividly etched in our memory. That colossal Bamiyan Buddha may be the last specimen in Afghanistan! However, this is not the case in India. Half a dozen colossal figures of rock-cut Maitreya Buddha of 30 to 36 feet are standing high in the open air space of Kargil area of Ladakh. The three giant images of Avlokiteshvara, Maitreya and Manjushri adorn the great Monastery of Alchi, which belong to the same architectural tradition of Gandhara art of 9th to 11th centuries.

Unlike Central Asian artifacts and manuscripts which we see displayed only in different museums, Buddhist paintings, sculptures- making and ritual services which had been practised in Kashmir, are seen as living tradition in Ladakh. The sadhana of Mahavairochana as well as other form of yoga practices can still be seen being performed at different hermitages spread over vast barren land of Ladakh, and hence this region is now widely known as "The Hermit Kingdom".

Another aspect of this exhibition on Alchi Murals under the title "Alchi: the Living Heritage of Ladakh" justifies the case that Buddhism never disappeared from India, as some historians have been claiming about the Buddhist history of India.

Also, the idea of presenting and documenting Alchi Murals struck me after hearing a story of the visit of a foreigner at the Hemis Monastery, Leh, who had photographs of fresco-paintings of the monastery taken by him a few decades back. When he enquired about those paintings, the Lamas there informed that the old structure enshrining those paintings had been dismantled and replaced by the new impressive building. Holding those photographs in hand, the visitor wept bitterly and left the monastery quietly. This documentation of Alchi Murals was felt essential and therefore the exhibition accompanies this catalogue.

Although the earlier works of Roger Goepper and Pratapaditya Pal are commendable, they covered fewer images of Sumtsek Murals.

The present Catalogue and its abridged version in a Booklet deas with as many as one hundred and fifty images taken both from Sumtsek and Dukhang. The Central Institute of Buddhist Studies, Leh intends to undertake the documentation of entire Alchi Murals enshrined at six different shrines within the Alchi complex.

Two larger contemporary complexes, Nyerma near Leh town and Sumdha across the mountain of Alchi, have already been reduced to rubble and there are no signs of the type of arts that had existed there. Our effort is to avoid such uncomfortable situation and in bringing to light this Catalogue on Alchi would help art lovers appreciate Alchi Murals for a long time to come, these being one of the last living specimens of ancient paintings in much variegated forms in India.

This exhibition "Alchi: The Living Heritage of Ladakh" as well as the Catalogue and and its abridged version are made possible only because of the Likir Monastery and its Head, H.E. Ngari Rinpoche who had generously allowed us to take the photographs of Alchi Monastery. We feel equally beholden to the National Museum, New Delhi, for all the necessary and emergent support it had given for the success of this programme.

We are grateful to Dr. Kapila Vatsyayan for writing a thought-provoking foreword to the Catalogue and Dr. B.M.Pande for editing the text.

Equally thankful, we are to Rev. Thupstan Paldan, Madam Francesca Meritt, Dr. Sanjiv Kumar and Rev. Konchok for their unstinted support and contributions.

We are indebted to Shri R.C. Mishra, Director General, National Museum and the former Chairman, Board of Management (BOM), of Central Institute of Buddhist Studies (CIBS), Leh and Shri Lov Verma, the present Chairman of BOM CIBS, Leh and Joint Secretary Department of Culture, Government of India, for extending their sincere support in presenting this Exhibition and Dr. R.R.5.Chauhan, the Director, (Exhibition and Public Relations) National Museum, New Delhi, for making all out efforts in this regard.

We are thankful to Dr. B.K.Sahay, Curator of the Exhibition for his active role and help in co-ordinating the entire programme and shaping the Exhibition and Shri Tsering Mutup, Administrative Officer (CIBS) for his valuable efforts. Aditya Arya deserves our special thanks for the brilliant photography of Alchi Murals duly supported by Mr. Suresh. Our heartfelt and special thanks go to Anoop Sharma for designing the catalogue and entire communication package patiently and cheerfully with the help of Ms. Jovita Banerjee. 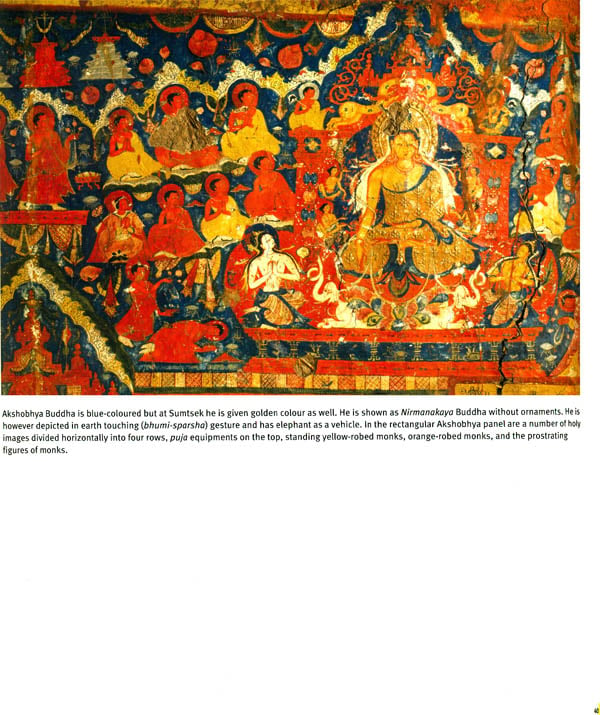 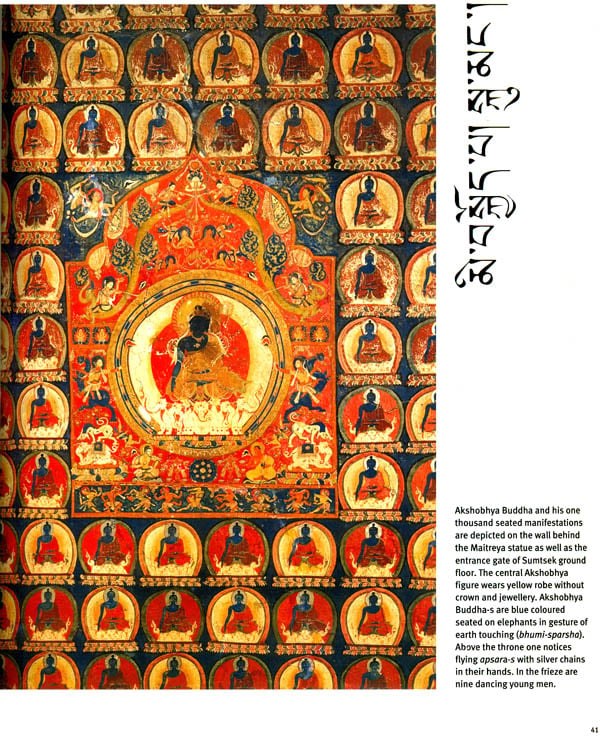 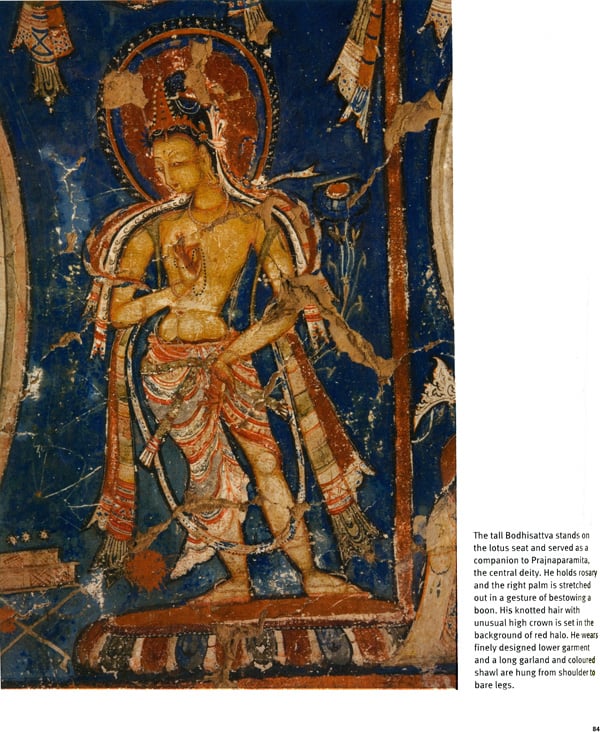 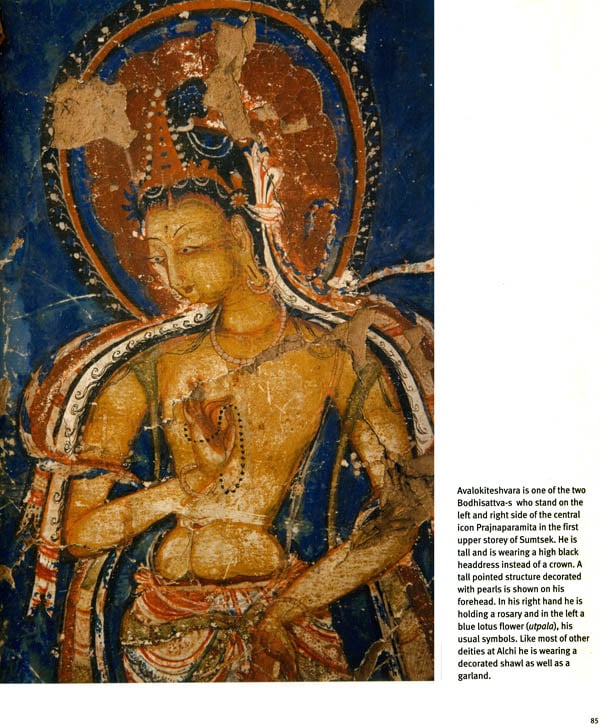 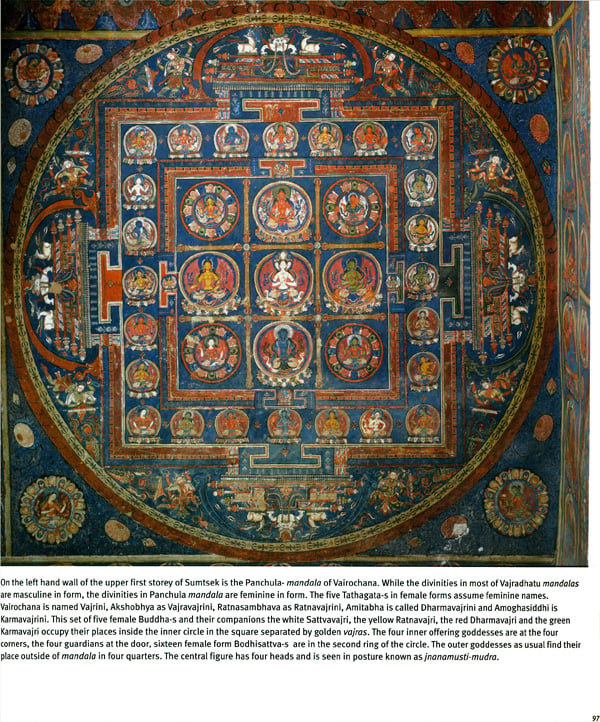 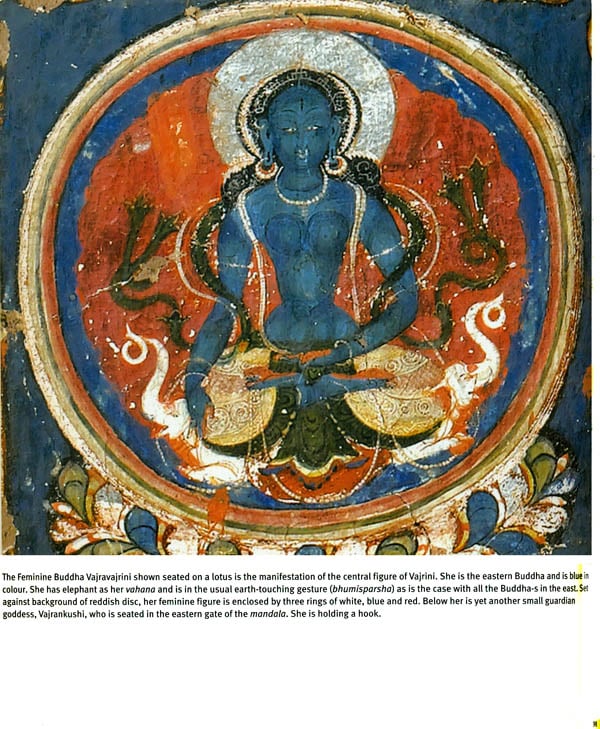 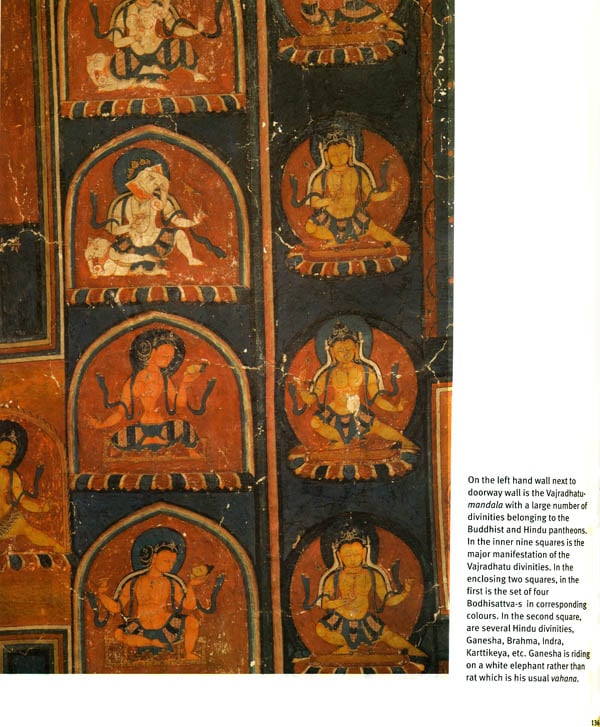 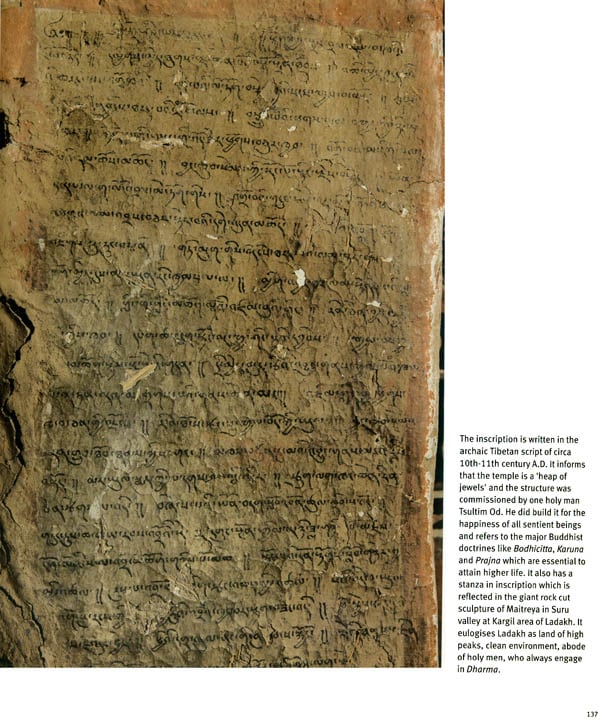 Buddhist Art in Tibet: New Insights On Ancient Treasures (A Study of Paintings and Sculpture From 8th to 18th Century)
By Michael Henss
$77
FREE Delivery

Studies in Hindu and Buddhist Art
By Ed. By. P.K. Mishra
$36
FREE Delivery

The Way of The Buddha (An Exhibition of Buddhist Art From The Collection of Indian Museum)
Publisher Indian Museum, Kolkata
$36
FREE Delivery

The Buddhist Art of Kausambi
By Aruna Tripathi
$125
FREE Delivery 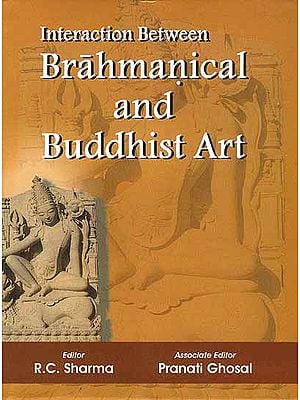 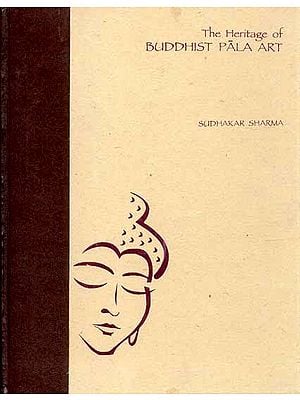