(1) According to the great German indologist-Professor Max Muller, who spent his whole life in the study of the Vedas, "Vedas are the oldest books in the library of the world". In case, therefore, we find evidence in the Vedas to show that astrology was recognized by the author of the Vedas, it would obviously mean that astrology is the ancient most discipline in the annals of the world. It would also go to show that the Hindus, who have inherited the Vedic knowledge, have been the pioneers in this divine science.

(2) The Vedas are replete with astronomical and astrological references. In the remote past there was no distinction between astronomy and astrology. These were known by the common name of "JYOTISH" THE STUDY OF ' THE LUMINOUS HEAVENLY BODIES. As we shall show during the ensuing discussions, there are mantras both of astronomical and astrological import. Some quarters are of the opinion that the Vedas are, no doubt, scientific works, but they recognize only astronomy and not astrology. This view is not correct. We have definite evidence in so many of the Vedic mantras to prove that the Vedas recognize both astronomy and astrology.

(3) In fact the main aim of this book is to show that astrology has not been left out of the purview of the Vedic text. There are Vedic texts on which only an astrological construction can be placed. These texts have been specially dolt within the present work.

(i) Grammer, (ii) Chhanda, (iii) Nirukta, (iv) Kalpa, (v) Shiksha and (vi) Jyotish. Of the above six limbs "JYOTISH" has been linked to the eyes of the human system. In other words, astrology, according to the Vedic view, enables us to see what the Vedas want us to see-the spiritual truth.

(5) The declared aim of the Vedas is to lead mankind to the ultimate goal of "EMANCIPATION", "LIBERATION" or "MOKSHA". Hence astrology is held to help us in seeing our aim in life clearly. It thus justifies its epithet as a limb of the Vedas.

(6) The science of astrology, by the very fact of its being a limb of the spiritual Vedas, is spiritual both in its constitution and function. The basic and fundamental concepts of astrology are all spiritual in nature. For example, as we have shown in this work, the 12th house of the birth chart in astrology is the negation of the traits of the house, i.e. the negation of the body with all its components, visible and invisible-emotions intellect etc. This concept of astrology is a purely spiritual concept, in as much as spirituality holds that the state of moksha for which the 12th house stands in astrology does not evince any action on the part of the body, mind or intellect.

(7) Again, as we have shown in this book, the sequence of the houses of the horoscope in astrology is "EVOLUTIO-NARY" in character and is designed to show the evolution of man from one stage to another until he reaches the spiritual perfection, denoted by the 12th house. The evolutionary role of the houses of the horoscope is in perfect accord with the spiritual aim of the Vedas to evolve man to perfection.

(8) Even the excellence of planets, i.e. their exaltation is based on the Vedic principle, as is clear, for example, by the exaltation of the Sun in the asterism of "ASHVIN[" in the sign Aries. The asterism "ASHVINI", in astrology, belongs to the planet Ketu-whom astrology declares as the significator of "LIBERATION" or MOK SHA. Thus the Sun gets exalted when located in the asterism of "MOKSHA". As the Sun is "ATMA"-the soul (SURYA ATMA JAGTAH TASTHU-SHASHCHA") its exaltation in moksha needs no explanation. A doubt can arise in this regard as to why is the Sun not exalted in the sign Leo or Sagittarius where also we have asterisms belonging to Ketu-the moksha karaka. The answer is that the sign in which a planet is exalted constitutes a test of the exaltation of that planet. Atma in moksha is in such an exalted state of existence that it is no longer touched by sin. Now there is no better sign than Aries to denote "SIN", for it belongs to Mars whose very name in astrology is "PAP1" or the sinful. Leo and Sagittarius, belonging, as they do, to the "SATVIC", Sun and Jupiter could hardly be expected to act as sinful surroundings.

(9) Similar is the case with every other planet ; every-where the sign of exaltation is a testing ground for the planet that gets exalted in it. Moon, the emotional, can be tempted by Venus the sexual planet lord of Taurus-where Moon gets exalted. Similarly Mars the martial is tested by its bitter enemy Saturn in whose sign (Capricorn) it gets exalted, and so on.

(10) The names of the Hindu trinity, i.e. Brahma, Vishnu and Mahesh symbologically stand for the functions of "CREATION", "PROMOTION" and "DESTRUCTION" respectively, as we have tried to explain in this book on the basis of the symbols these deities are shown to hold in their hands etc. The symbolic presence of Brahma, Vishnu and Mahesh is found in the first trinity of the houses-Ist to 3rd of the horoscope, as the functions of the brain. The first house stands for the creation of the brain through the birth of the body. The second house stands for its promotion through "EDUCATION" which this house represents. The third house-the house of -CONFUSION OF MIND" shows the destruction of the brain. Similarly in the next triplicity : The 4th house-the house of -EMOTIONS" stands for "PLEASURE". In the 5th house, for its acme denoted by the cinema, the theatre, the club and other resorts of pleasure. The sixth house-the last in this plicity denotes the destruction of pleasure through diseases and enemies which the 6th house stands for. Again in the next triplicity there is the birth of "SEX" in the 7th house, its 73motion in the 8th and its destruction in the 9th-the house morality and spirituality. Lastly we have the triplicity of -KARMA"-where the 10th house stands for the birth of Karma, the 11th for its excellence and the 12th (the house of moksha) for its destruction.

(12) The mantras of the planets as given in the Vedas also give adequate hints in regard to the main qualities of the planets of astrology as we have tried to explain in the body of this book In short astrology is a divine science, a part of the Vedic learning, intended to place before us a blue-print showing how man can reach perfection through various experiences in life. Astrology has, of course, its mundane uses, quite numerous, yet the basic concept of astrology is spiritually oriented. 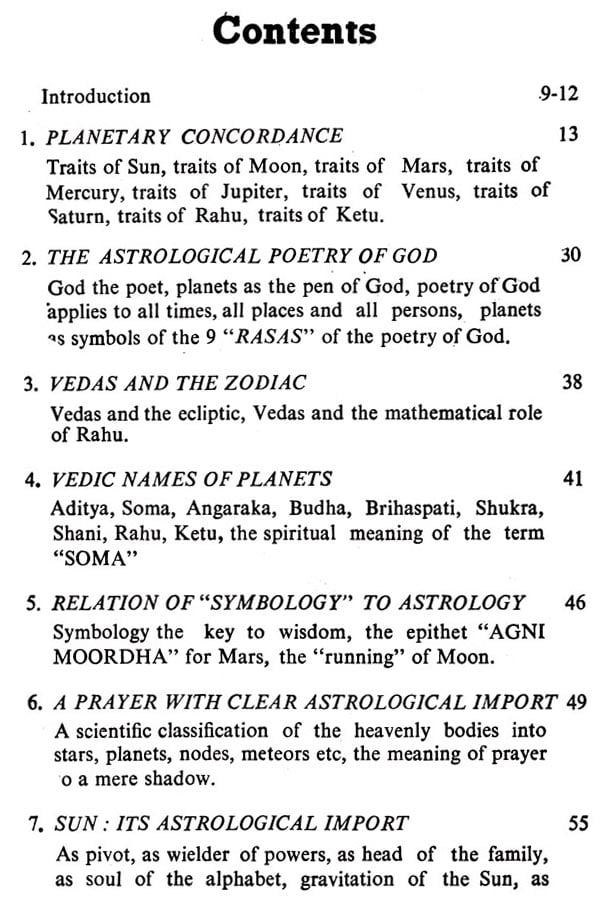 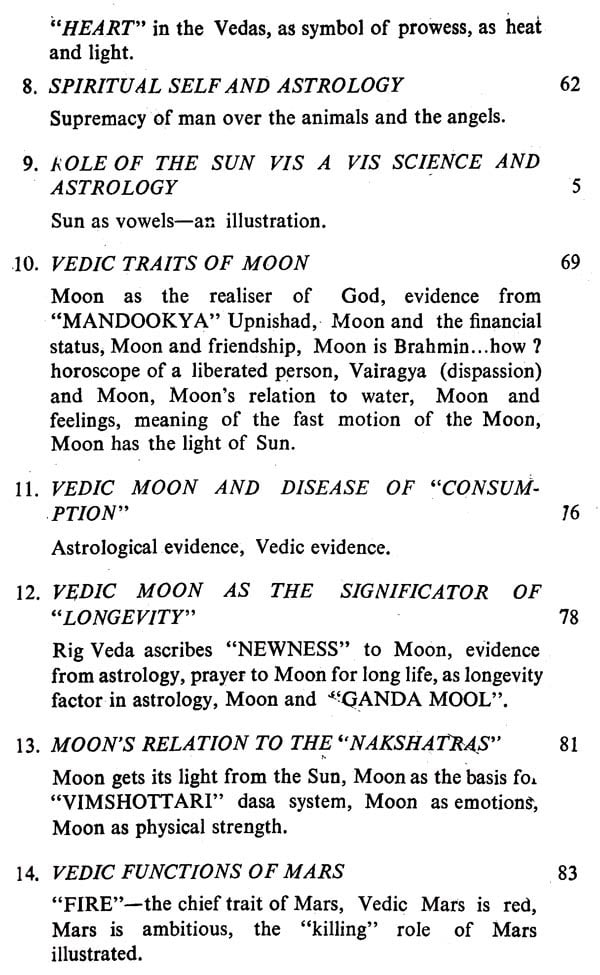 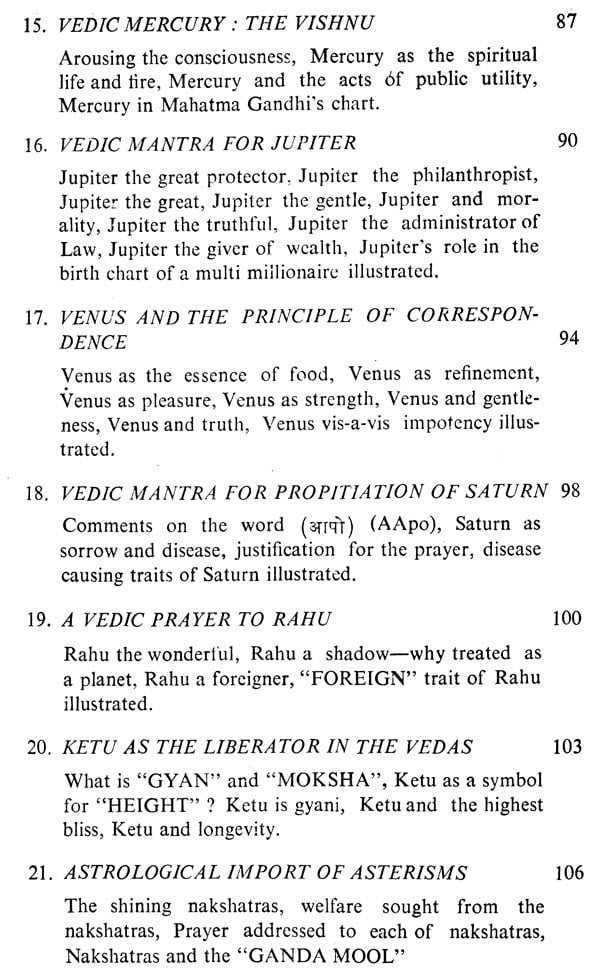 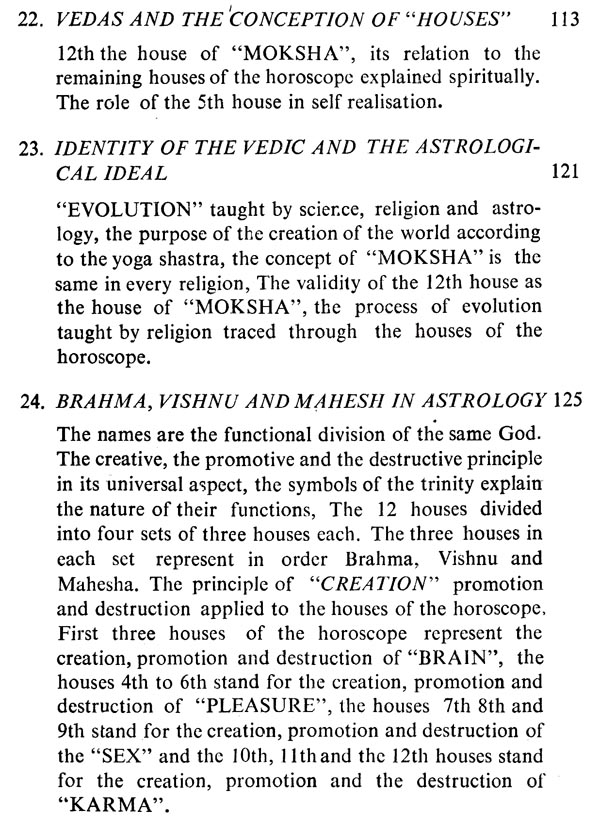 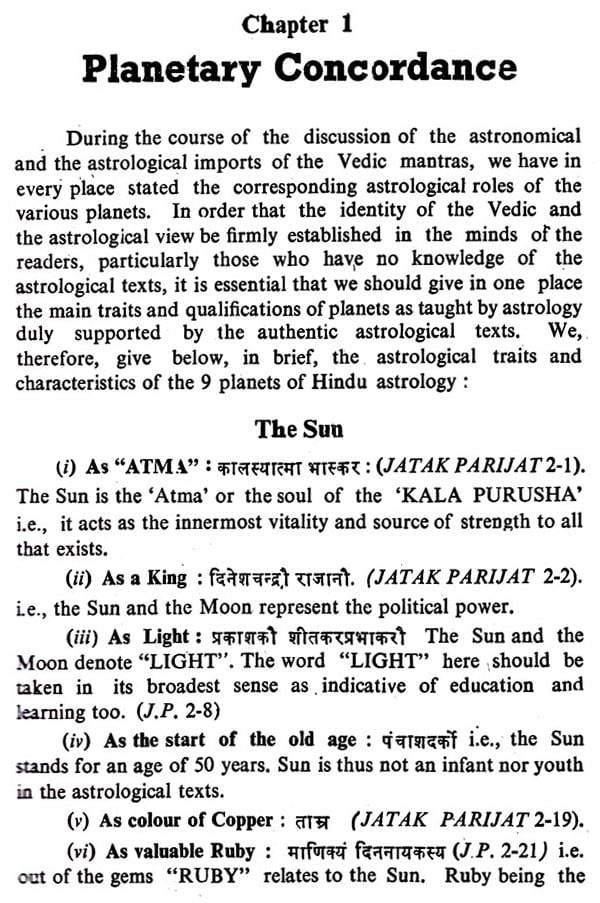 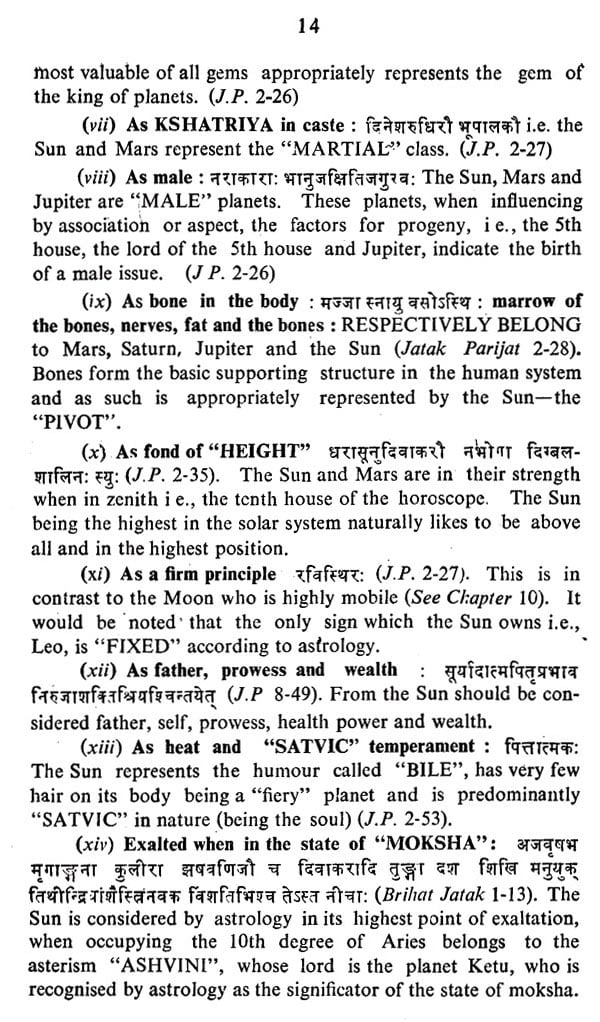 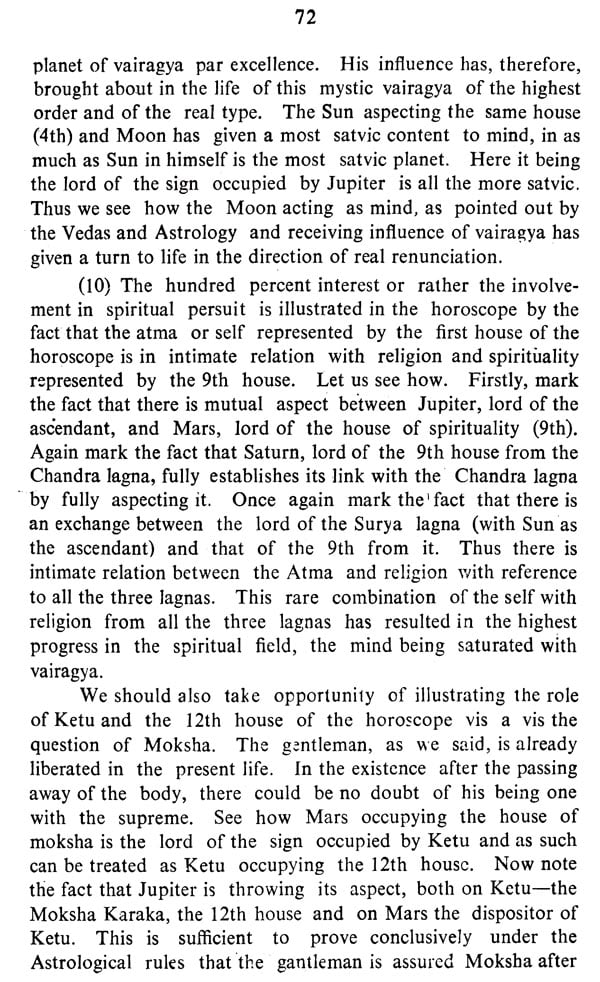 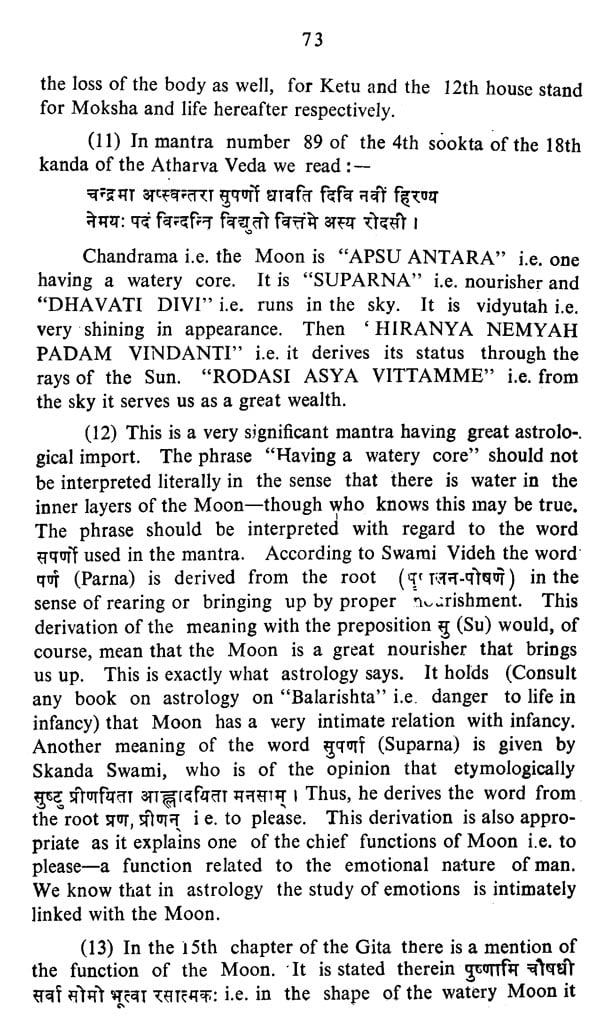 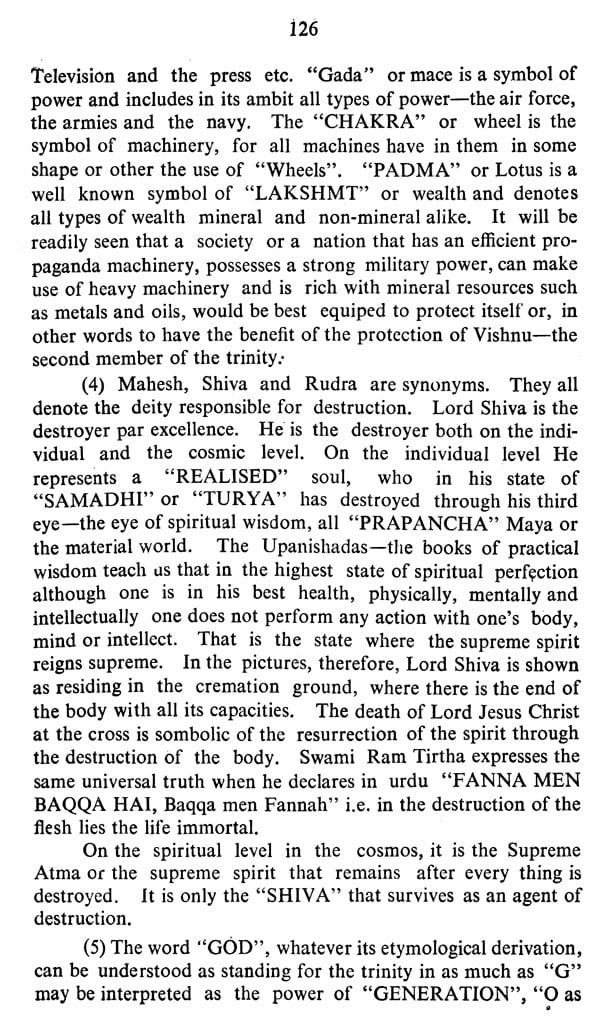 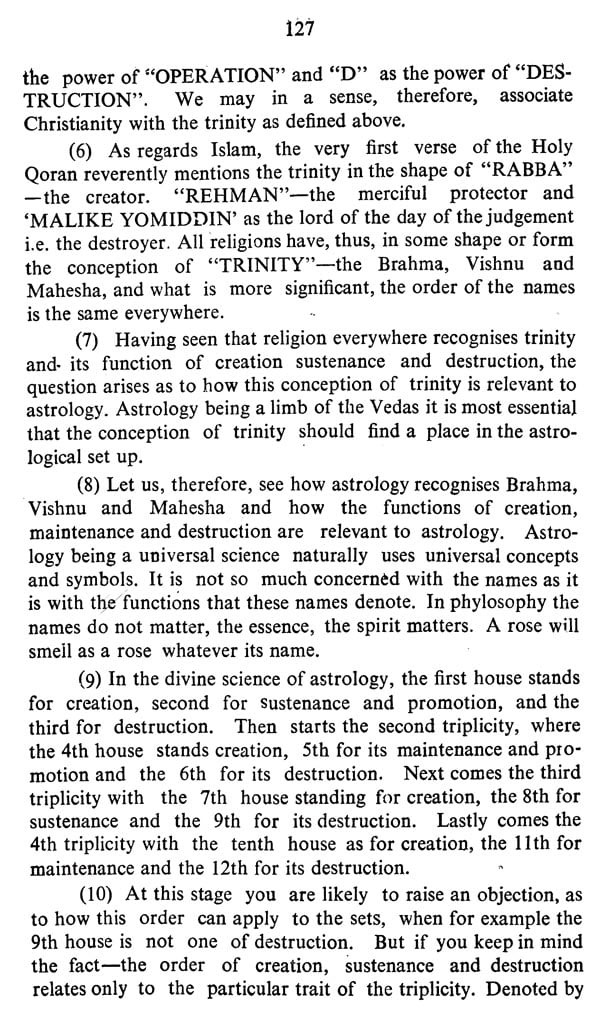