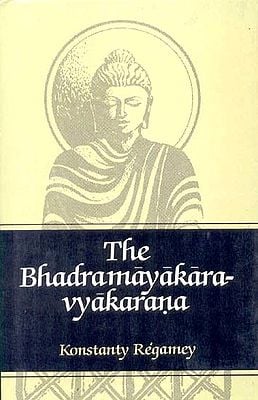 $15.00
Notify me when this item is available
Save to Wishlist Send as E-card Share by Email

The Bhadramayakaravyakarana is part of the great collection entitled Ratnakuta, "Multitude of Jewels", a collection much revered in the Buddhist Mahayana traditions of Tibet and China

The work possesses rather a literary value than a doctrinal one. It is one of the text, so rare in Mahayana, where the narrative and the doctrinal subjects constitute a logical whole. It contains the story of juggler Bhadra who wanted to deceive the Buddha with magical tricks in order to prove that the claim of the Tathagata to omniscience was false. But the Buddha foiled his attempt by performing such a magic that Bhadra could not revoke his charms, and was finally converted.

This is a reprint of the 1938 Warsaw edition of the work containing an Introduction, Tibetan text, Translation and Notes published by Konstantly Regamey, which was almost wholly destroyed during the Second World War. It should be noted that the work has not been preserved in the original Sanskrit.

Konstantly Regamey (1907-1982) was born in Kiev of a Swiss family which had emigrated to Russia in the 19th century. He fled from Russia to Poland in 1917 and subsequently to Switzerland in 1945. He had a double career, being both a musical composer and an orientalist. In the domain of orientalism his preferred field was "Buddhist Hybrid Sanskrit" which was the vehicle for the canonical literature of Mahayana Buddhism in India. Regamey's interest in this literature was not just linguistic, but also philosophical, as is evidenced by his translation of the Three Chapters from the Samadhirajasutra and the Bhadramayakaravyakarana.

List of the Chinese words Occurring in the Text