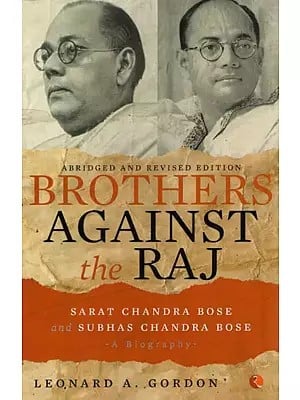 Subhas Chandra Bose and his elder brother, Sarat, were among the most important leaders of the Indian Independence struggle. Active between the 1920s and '40s, they led the extremists' fight against the British, often clashing with the ideals of Mahatma Gandhi and other moderate leaders of the time. Subhas and Sarat also advocated socialism in Bengal and India, with Subhas Chandra Bose forming the Forward Bloc in 1939 to promote these ideals.

In Brothers Against the Raj, bestselling author and historian Leonard Gordon sheds light on the most important events from their lives, placing them in the context of the Indian freedom struggle and international politics of the period. Poring through archival material, records and hundreds of unpublished letters as well as conducting interviews with the brothers' political contemporaries and family members, he uncovers several previously unknown facets of their tumultuous lives in this definitive biography. This abridged, edition of the magnum opus brings these two controversial leaders, and a significant epoch in India's history, to renewed and explosive life.

This edition is an abridged version of the 25-year-old original, a book that is rich and full of documentation based on more than 100 interviews and research conducted across fourteen countries. After friends advised me that it would be helpful to have a shorter book with fewer details on Indian politics and with footnotes trimmed down from the original 2,500—and the publisher, Rupa agreed—I agreed too. This was possible only with the able help of my friend and colleague Margaret L. King, a fine scholar and editor. She did a marvelous job with the abridgment. I only had to supply the references for quotations and omitted most of the bibliography. Those wishing to read the fully detailed life of the Boses and see the full notes and sources, should refer to the original edition.

Although quite a few books about Subhas Bose have been published in the intervening period, for the most part they have simply added details. Several fine books about Netaji's years in Europe have appeared, and they are listed in the bibliography. None of these books, however, seem to have changed the story of his life as I presented it or led me to alter my analyses or judgments.

First, last, always, I would like to thank the family of Subhas and Sarat Chandra Bose for all the help they have given me for over many long years. Foremost are the late Sisir K. Bose and Krishna Bose who have assisted me in uncountable ways and shown me continuing kindness and hospitality over the years. I also must thank their children, Sugata, Sarmila, and Sumantra, who have gone out of the way innumerable times for me, and eventually became dear friends. Several of them have now written their own versions of the Boses' lives, but they have never told me how to write mine. The late Charu C. Chowdhuri sat for many hours with Krishna Bose and me, trying to help me understand the early letters and views of Sarat Bose. The late Emilie Schenkl and her daughter Anita (Bose) Pfaff have shown much kindness on my visits to Vienna and Mrs Schenkl spent long hours answering my questions.

Ainslie T. Embree let me impose this work on him, year after year, chapter by chapter, and his comments have always been astute and insightful. Bharati Mukherjee helped with the critical reading of some sections, translating, and choosing of chapter titles. Dennis Dalton also read all the chapters and gave searching, detailed comments and encouragement which always buoyed me up. Johannes Voigt, Milan Hauner, Joyce Lebra, K.K. Ghosh, and Hugh Toye—all of whom have written fine accounts of Subhas Bose during the World War II—generously helped me to write mine and my debt to them are evident in these pages. In Calcutta, Tridib Ghose, Shipra Chatterjee, Suman Chattopadhyay, Kasturi Dutta, Piyali Guha Thakurta, Bani Nath Bose, and Bandana Mukhopadhyay helped with the collecting of materials and making translations from Bengali to English. My late, beloved aunt, Regina Berman, made translations from Italian. Other friends who read the text gave me valuable advice. As in the original edition, however, the final responsibility is, of course, my own.

My research was also facilitated by various libraries in many cities and I give my heartfelt gratitude to the staff of the India Office Library and Records, London; the British Library, London; the Nehru Memorial Museum and Library, New Delhi; the National Archives of India, New Delhi; the National Library of India, Calcutta; the West Bengal State Archives, Calcutta; the Netaji Research Bureau, Calcutta; the Imperial War Archives and Foreign Office Archives, Tokyo; the Foreign Office Archives, Bonn, West Germany; New York Public Library; Columbia University Library; Library of Congress, Washington, D.C.; and, the University of Chicago Library. Martin Moir and Richard Bingle at the India Office Library and the directors and staff at the Nehru Library have gone many miles to help me find what I needed.

I also want to thank members of three different generations of the Mehra family, the late Mr D. Mehra, Mr R.K. Mehra, and Mr Kapish Mehra, who have helped in many ways in encouraging me through different stages of the production and distribution of this book.

My wife, Marie, my stepdaughter, April and her husband Steve, have supported me with unfailing patience and cheerfulness. My brother Jim has helped me in many practical ways and shared in the creation of the Netaji Slide Collection and in preparing photographs for this book. I have been lucky to have him as my brother. Neither my late father, who launched me on the study of imperialism, nor my mother, who proofread an earlier book for me, are here now, but they remain with me in my heart.