A Critical Study of The Mahabhagavadpuranam 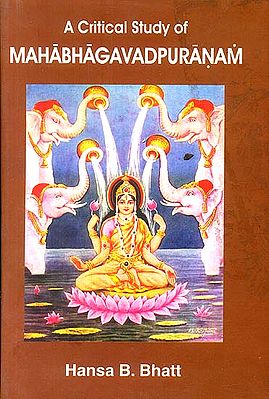 A Critical Study of The Mahabhagavadpuranam

$43.00
FREE Delivery
Quantity
Ships in 1-3 days
Notify me when this item is available

The critical study of the Mahabhagavata Purana indicates that it has very well achieved this end by linking the different anecdotes connected with important personalities of Indian History with the greatness and adoration of the great goddess.

The Mabhg. is a Sakta Upapurana, advocating Saktism with a Saiva tendency and throws light on the exploits of Devi as well as on the ten Mahavidyas. In spite of its outspoken inclination towards Siva, this Purana follows the Vedanta in advocating the unity of all gods. Its importance in spreading Saktism is noticeable. Specially noteworthy is the spirit of tolerance of other sects that breathes forth in this Purana as shown in chapter 1.

In the 2nd chapter, the actual position of the Mabhg. as an Upapurana is established. In chapter 3 a succinct summary of contents is given. In chapter 4, a comparative study of the Mabhg. with some Puranas, Epics and Tantra works reveals that from among the Puranas the Siva Purana has most deeply influenced the Mabhg. In chapter 5, the relative dates of relevant Puranas are decided. In chapter 6, it is made clear that the Mabhg. utilizes the Upanisadic thoughts as well as those of the Bhagavadgtta and the epics as regards the concept of the ultimate nature of Devi.

In chapter 7, the Mabhg. refers to the Mantras, Tantras and Diksa etc. Chapter 8 contains the essential nature, forms, incarnations and exploits of Devi. Chapter 9 contains literary estimate of the Mabhg., specifying the Arsaprayogas, the figures of speech, the matter, the different eulogies and their significance as also some discrepancies in the Mabhg. Chapter 10 contains social and religious data emphasizing the practice of righteousness on the part of everyone. In chapter 11, the importance of this Purana depending upon its throwing light on the topics previously discussed and its influence on other works and in the end of the book two appendices have been given.

Serving in the Oriental Institute since 1991 till this date.

The Purana literature-both Mahapuranas as well as Upapuranas included-is a veritable source of knowledge. It contains the germs of our culture, civilization, religious sects and dogmas, scientific and technical literature etc. It has become a very important branch of research in the recent past and many scholars are devoting their time and energy to the study of one or the other Purana.

The present book exhaustively deals with the Sri-mahabhagavatapurana which till 1983 was not even printed, before Prof. Dr. Pushpendra Kumar Sharma edited it with English Introduction, Sanskrit Text and Indexes.

This Purana is a Sakta Upapurana, advocating the Sakta tradition with a Saiva tendency and is composed with a view to extolling the Devi-the Mother Principle-by narrating her exploits. It is very clear that this Upapurana has been inspired by diverse religious sects, but surprisingly, follows the Vedantic tradition of the unity of all the gods/goddesses, though its major inclination is towards Siva and it is influenced by the Tantras. This catholicity or openminded attitude is the special quality of this Upapurana and it has transcended far beyond sectarian rigidity.

The book is divided into 11 chapters, the main amongst them being those dealing with Introduction, summary of contents, sources of the Purana, philosophy of the Purana, myths and legends, the main Deity. viz., the Devi-Her essential nature, forms, incarnations and exploits that prove her paramount importance and superiority over other great gods and goddesses of the pantheon, literary study, cultural data, and culminating into the conclusion.

Thus, a look at the contents will give a fairly clear idea of the book and its contribution.

While dealing with all these points, Dr. Bhatt has done an admirable job by extensive treatment of philosophy-aspects, mythological data etc.

I am sure that this book will be well-received by the students/teachers/researchers and the general public too.

I wish success to Dr. Bhatt.

This Sakta Upapurana named Mahabhagavata which preaches pure unswerving devotion to Sakti or Devi empha-sizing Her Splendour and considering devotion to Sakti to be more efficacious than the devotion to its possessor either Visnu or Siva indicates the development of pure devotion to Devi that had reached its acme at the time of its composition. Its gaining popularity as a purana is inferred from Brhaddhar-mapurana's considering the Mahabhagavata as a Mahapurana and plagiarizing many verses from it over and above imitating its language and contents. Observing the above facts. I thought it worth its while to undertake a critical study of this Purana and to make good its deficit.

In this my undertaking, I have got valuable help and guidance from the following persons to whom my thanks are due.

Even though for my father and guide Dr. B.N. Bhatt, Retired Deputy Director, Oriental Institute, M.S. University of Baroda, Baroda, it ·was needless on my part to formally express my thanks to him still in order to avert the suspicion of being ungrateful in the eyes of others, I hesitantly but earnestly and humbly express my sense of gratitude to him for his able guidance throughout in this my undertaking, He has encouraged me inspired me an suggested to me the right solutions of different vexing points. My thanks are due to Prof. Dr. R.I. Nanavati, Ex. Head Dept. of Sanskrit, Pali, Prakrit. Faculty of Arts. M.S. University of Baroda, for his valuable suggestions.

I also thank the authorities of the M.S. University of Baroda for giving me permission to publish my thesis.

I also thank Shri CP. Gautam for accepting my thesis for printing and for publishing it in a book form. I also thank the officiating Director, Oriental Institute, M.S. University of Baroda, Dr. M.L. Wadekar, as also Dr. Wakankar the Deputy Director, Oriental Institutes, M.S. University of Borada for their valuable help and guidance towads publishing this book. 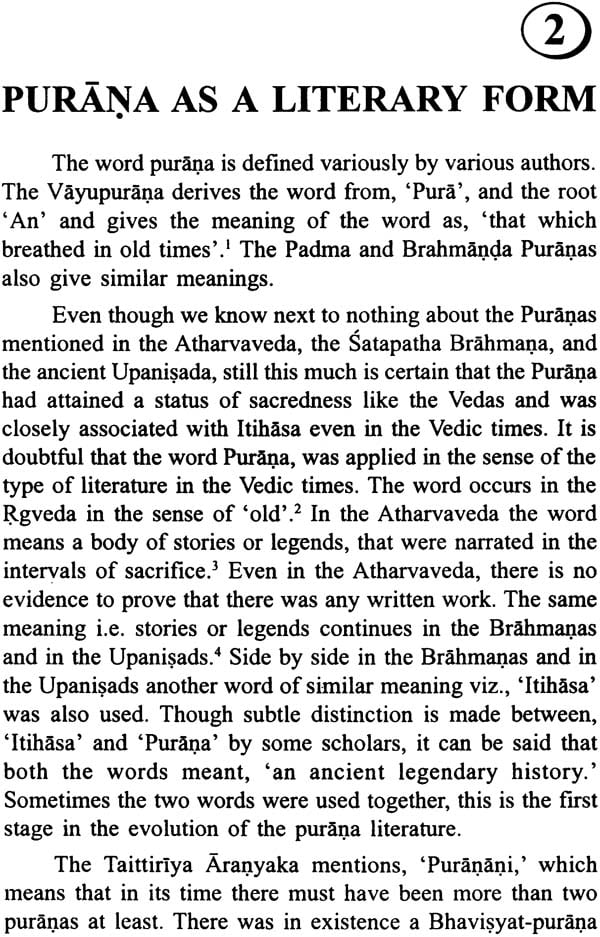 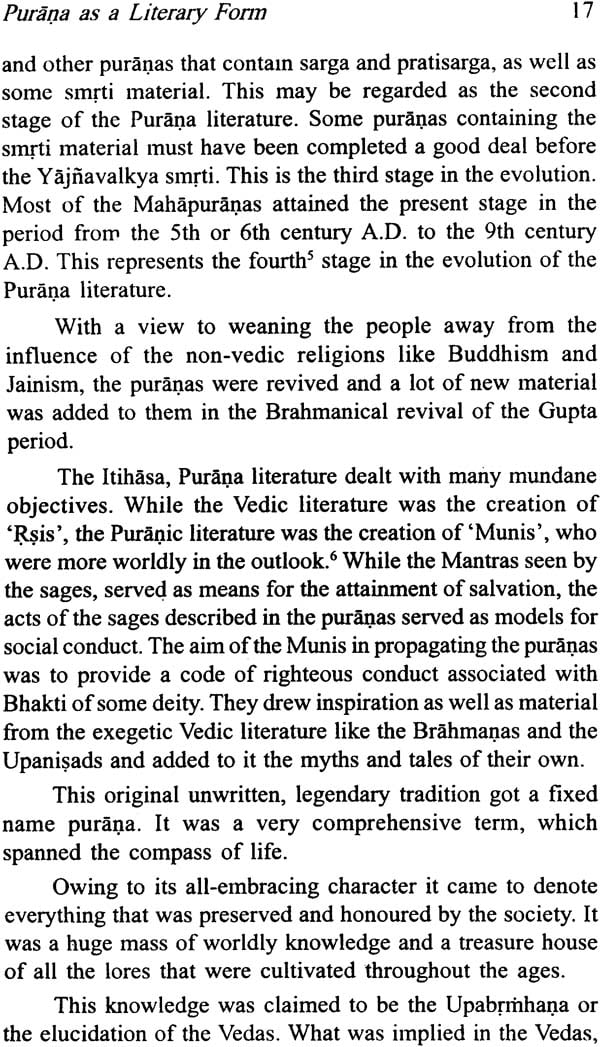 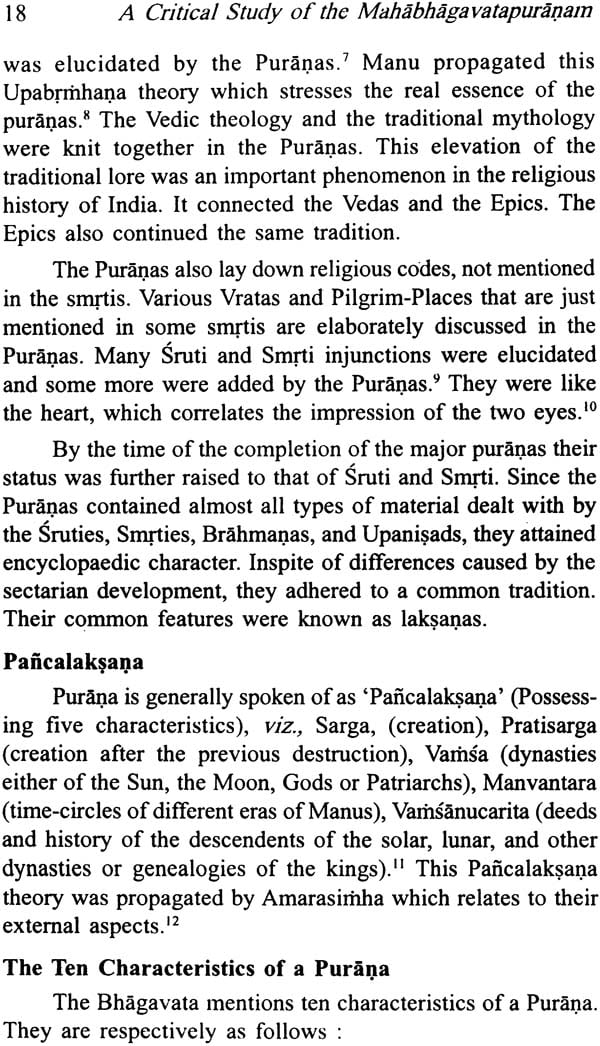 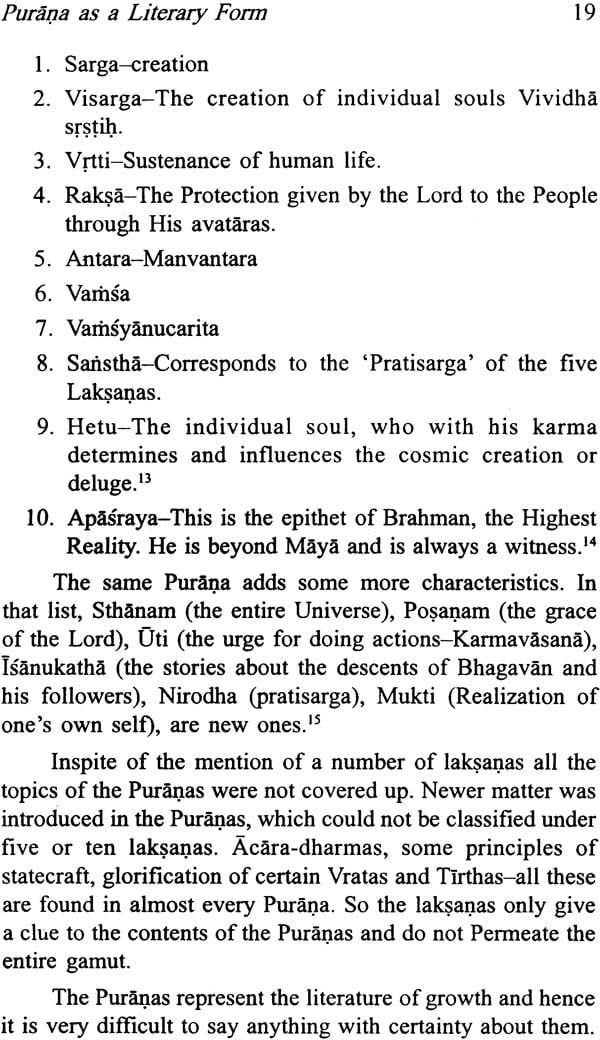 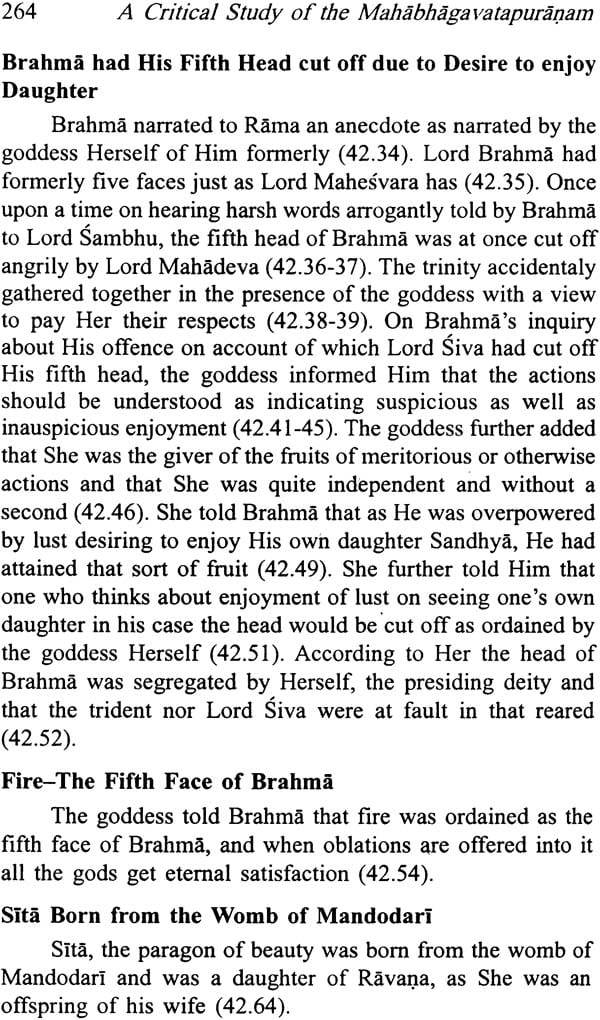 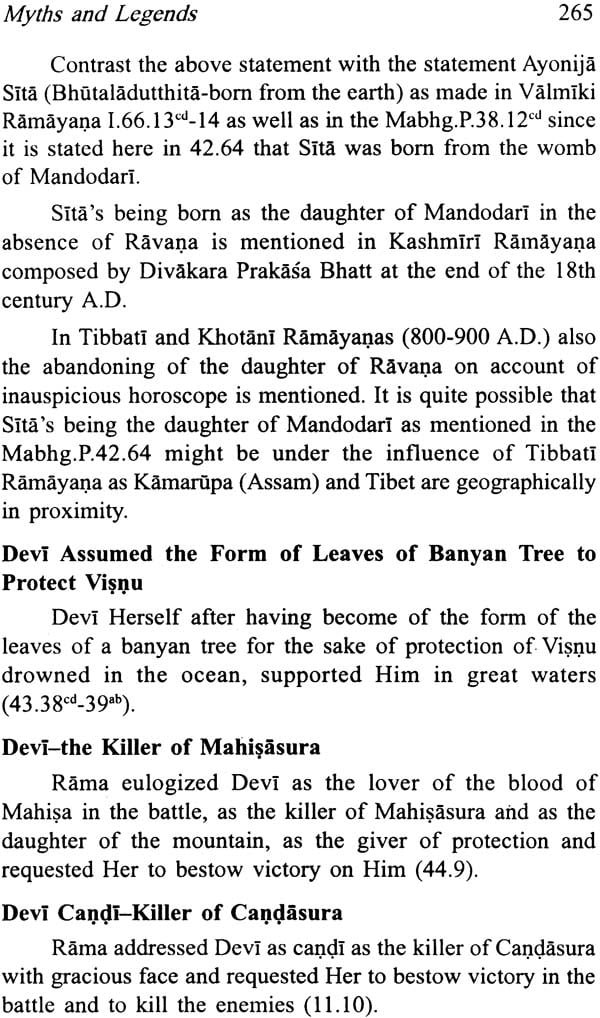 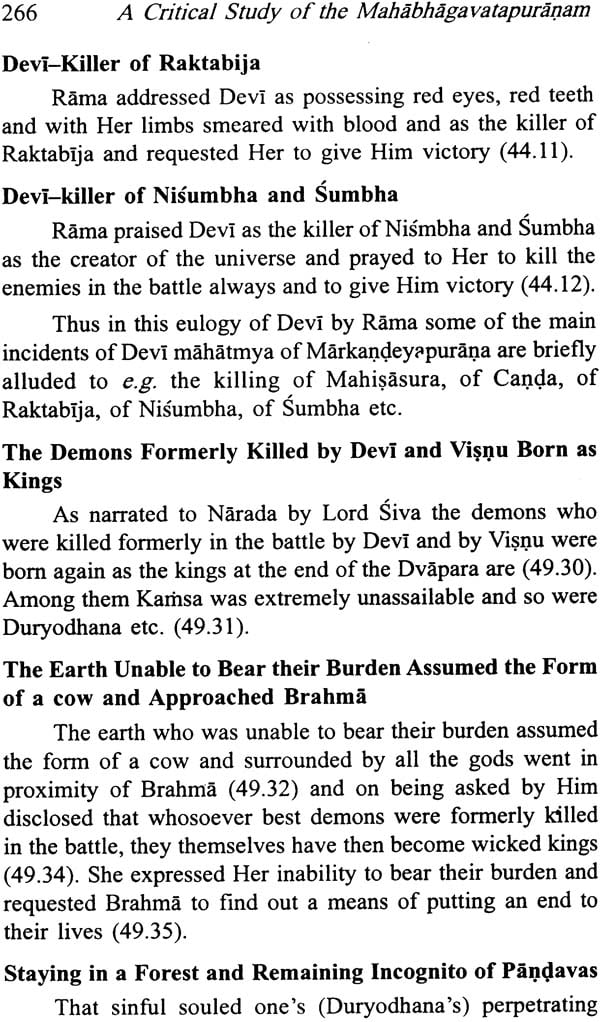 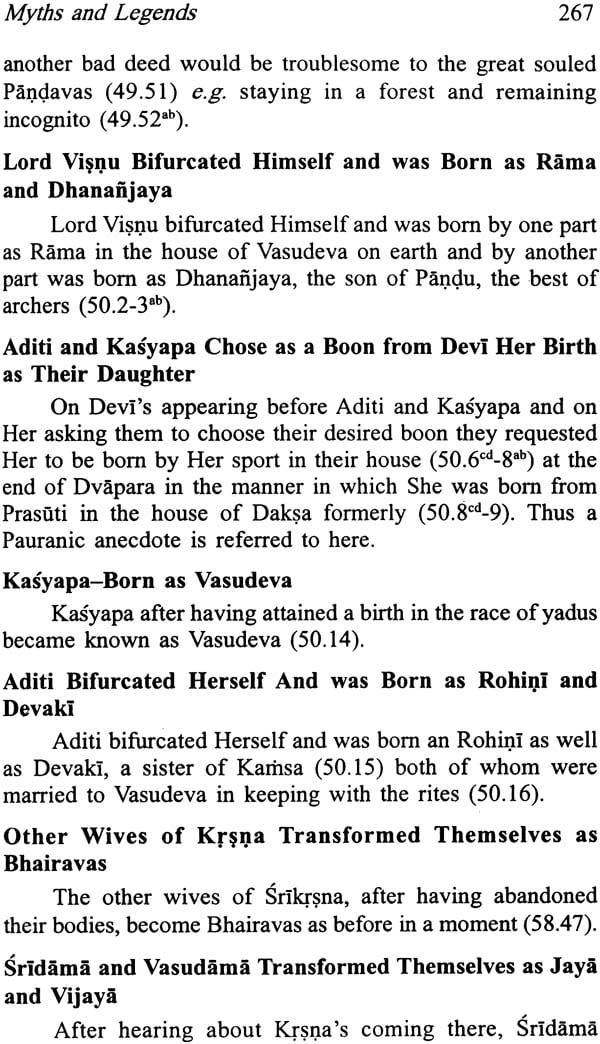 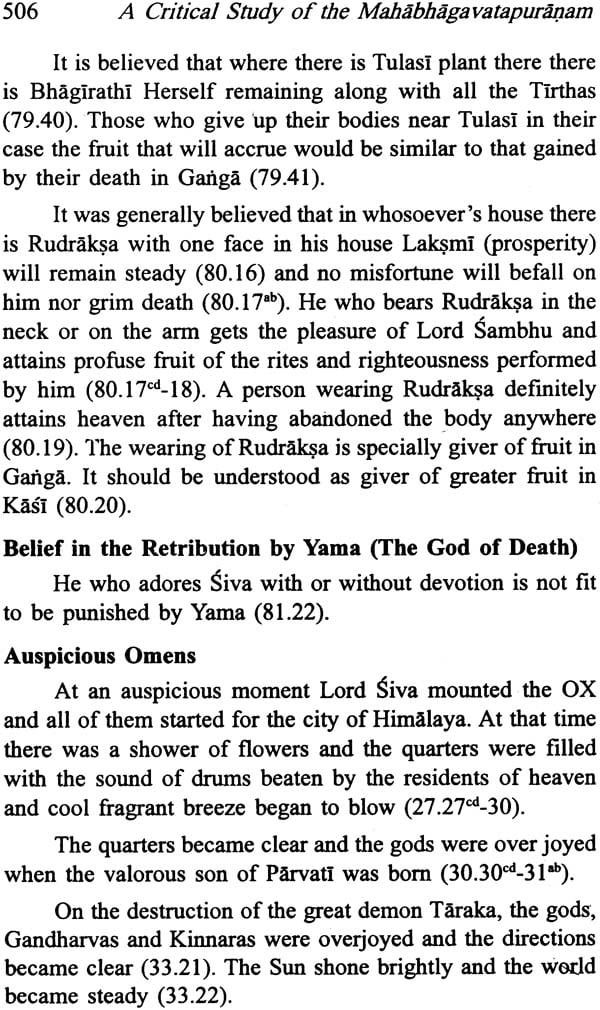 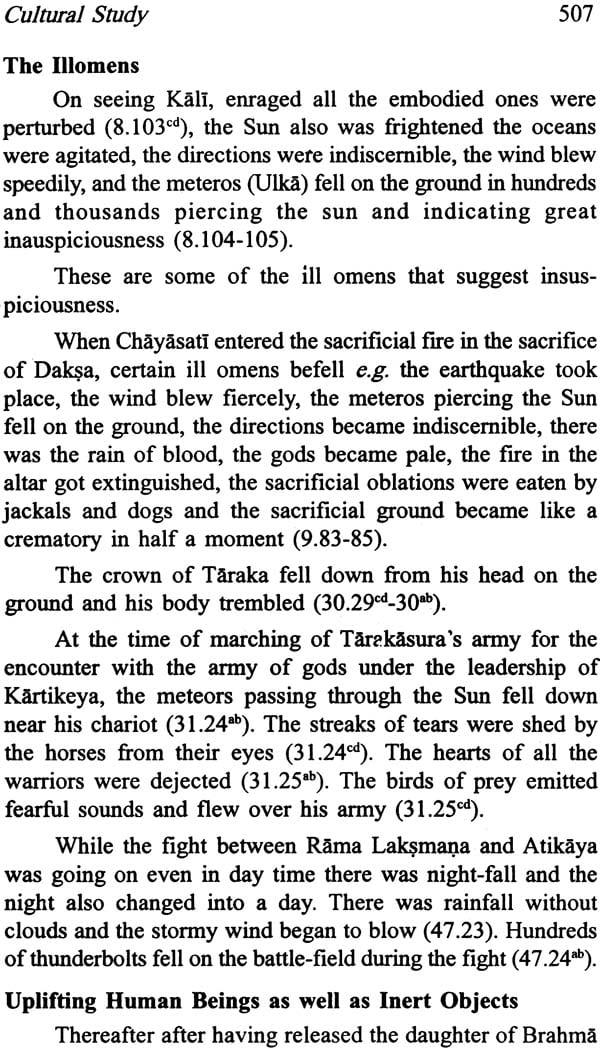 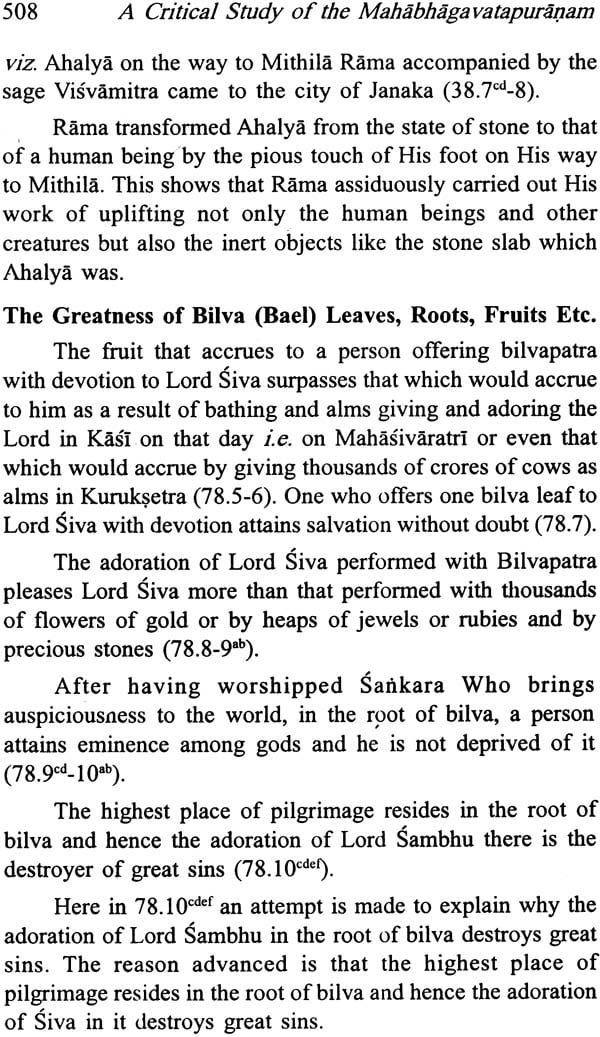 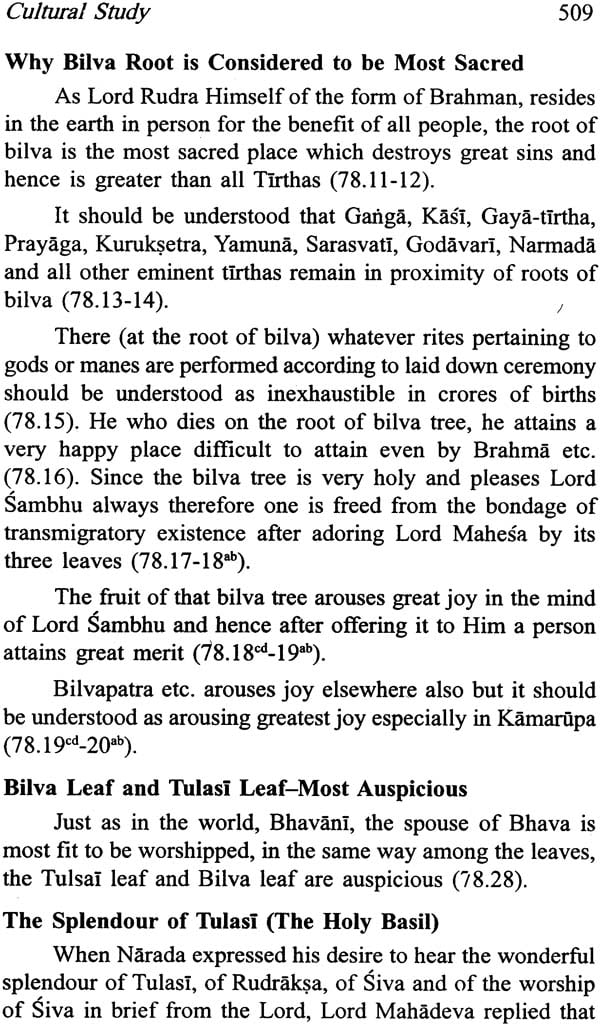 The Triumph of the Goddess: The Canonical Models and Theological Visions of the Devi-Bhagavata Purana
By C. Mackenzie Brown
$33.00
FREE DeliveryBestseller 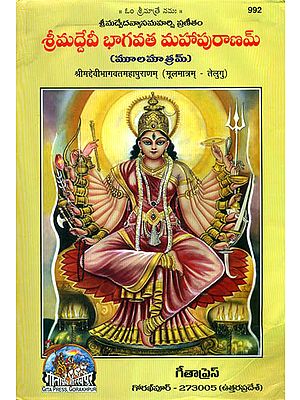 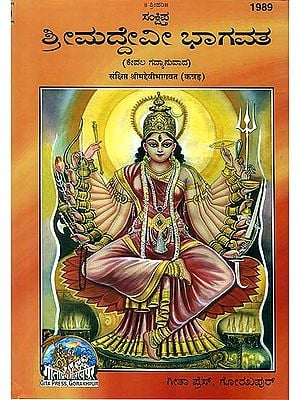 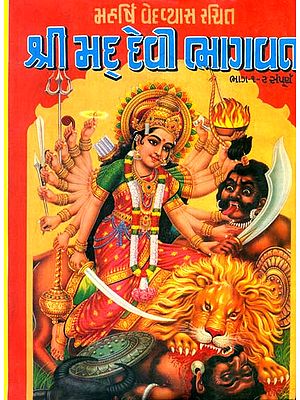 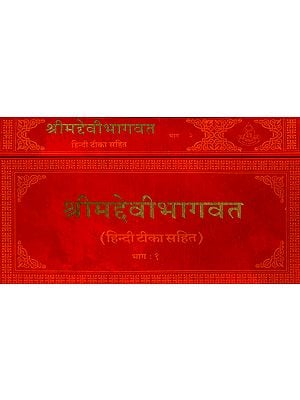 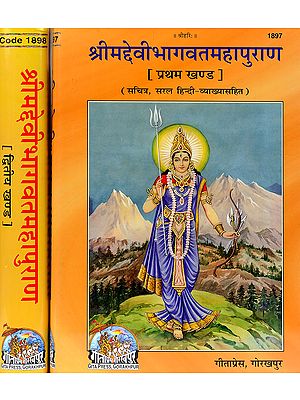 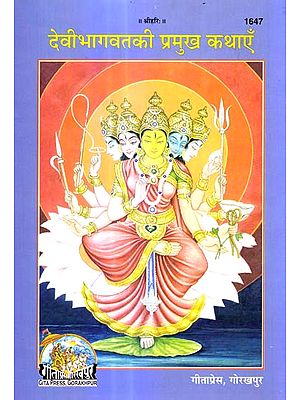 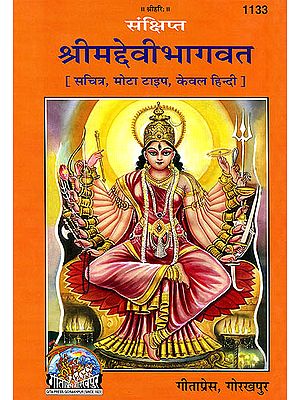 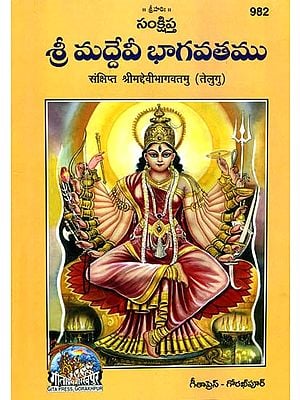 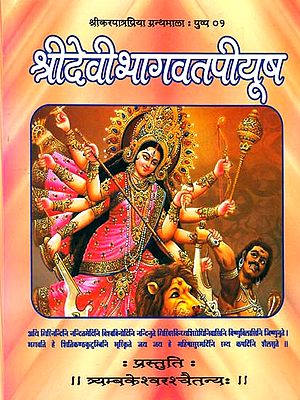 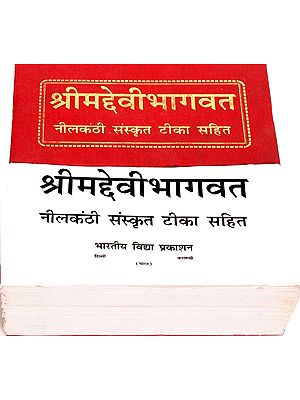 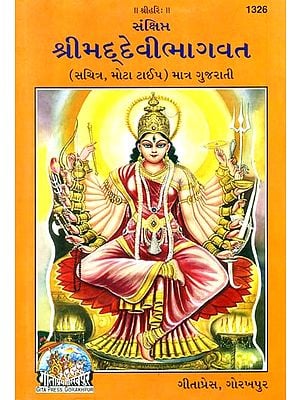 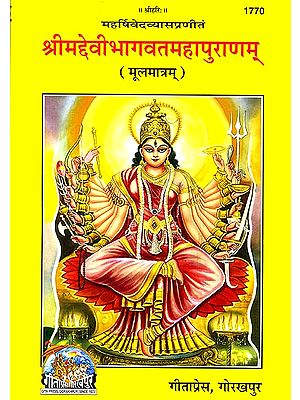 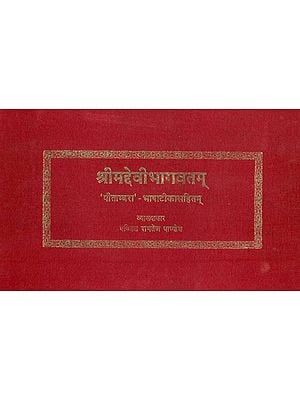