The Handbook of Indian Medicine or The Gems of Siddha System 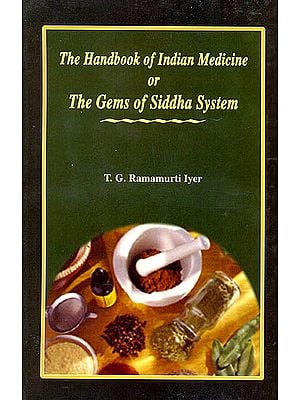 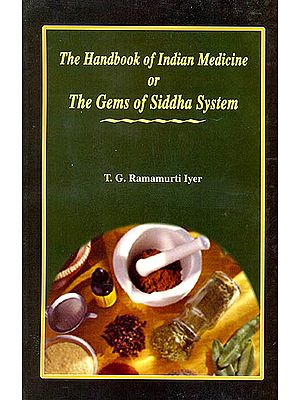 The revival of the Indian System of Medicine at the present day is one of the welcome signs of the times, and is seen in such publications as the present volume by Dr. T.G. Ramamurthi Iyer. The Ayurvedic and Siddha system of Medicine date back to a hoary antiquity, and became in the course of time the parent source of all the other Medical systems of the world. The humoral theory of the Hindus, though misunderstood, dominated the Greek, Roman, and Arabian medicine and in Europe down to the eighteenth century. Many of their medicine, plants and drugs, spices and aromatics have been incorporated in the material medica of almost every nation in the world. In fact, the influence of their medical works, their material medica and therapeutics and plastic surgery, etc. can be detected in the Persian, Hebrew, Greek, Roman, Arabic, Chinese, Tibetan and even in modern Europe-so that Colebrook was right when he said that in medicine the Hindus were teachers and not learners.

And yet, the ancient system of medicine as practiced by Charaka, Susruta, Aghastiar strikes one as so very new and modern. For instance, the three humours, on which the Indian medical system is based, represent the modern scientific ideas of metabolic, glandular and endocrine activities and their disturbance in the causation of disease. When Siddha physicians lay a great stress on the importance of minerals in the treatment of disease, they are voicing the present biochemical teachings which show that the deficiency of mineral salts in the human body is the main cause of many diseased conditions, and health can be restored and disease averted by supplying this deficiency, of tissue salts. The Ancient prescribed, as we do now, Datura stramonium in asthma, cowitch in worms. Nux vomica in paralysis and dyspepsia, arsenic in intermittent fevers, salt-free diet in Bright's disease, flesh and fatty foods in comsumption, and mild purgatives in the first stages of dysentery. When the Hindus included in their pharmacopeia such things as fat, bile, bone marrow, blood, flesh, hoof, etc. they early anticipated the therapeutics of the present day which prescribes cod liver oil, ox gall, bone marrow, haemoglobin preparations, raw meat, and calf's foot jelly. And when we add to these their knowledge of minerals and chemistry, of hypnotism, hygiene, eugenics, massage, postural treatment, organotherapy, of anaesthetics, contagion, we can not but exclaim that there is nothing new under the sun in the modern methods of treatment.

Well versed in all departments of human knowledge, and bold and original in their conception of disease and its treatment, the Ayurvedic and Siddha physicians found a remedy for almost every ailment the flesh is heir to. They were experts in the purification, calcinations and oxidation of minerals, and in gathering and storing medicinal plants, and the efficacy of their medicines remained for a long time, and indeed grew with age. They were masters in treating many difficult diseases and poisoned condition, as leprosy, snake bite, etc. which baffle us at the present day. Alas, some of their most important methods of healing are lost to us from disuse, neglect and want of support-lost to us in the ancient medical works and manuscripts. What is most urgently needed at the present day is a band of earnest and enthusiastic research workers who would devote their time and energy to examine and study the ancient learning, delve into the secrets of Indian medical science and art, lay bare their treasures of healing, and incorporate them with all that is best in the modern ideas and discoveries for the benefit of mankind. May we hope that this volume would in some measure stimulate a real interest in Indian Medicine both in the East and the West, and help the ninety percent of the Indian population who depend upon it for the relief and cure of their sickness and suffering.

This book is an attempt to present to the Medical and Scientific world, as short account of the principles and practice of the time honoured Sidha System of medicine. It does not pretend to be an exhaustive treatise and is intended to provoke thought and stimulate further study and research among those who are eager to explore.

The subject matter of the book has been derived from the study of various works of the Siddhas. It is felt that adequate justice has not been made to cull out from the great treasure house further and further information useful to the profession.

It has been often said that the Eastern Physiology begins where the Western Physiology ends and that correlated study of both is bound to pay amply. The system is based upon certain never failing "Laws of Nature" and human life, revealed and realized by the learned Yogis.

The study of emotion and the pulse forms part of the work of the Siddha Physician and the whole system is based on a rational and synthetic conception. This aspect is of special importance and great significance since we hear, even from great authorities in the West of the Imperfections and deficiencies in right emphasis in the study of Anatomy and Physiological functions. It is no harm in quoting from the "Hindu" a reference to the utterance of Dr. G.F. Walker, Honorary Physician and Consultant, Sunderland Royal Infirmary in the "Medical World".

"It is generally agreed that senior students spend far too little in acquisition of knowledge of human emotions, conduct and behaviour. They get a very skimpy, scrappy presentation of personal and family health which daily beset future patients. If any knowledge of drugs is imparted to them, it is usually of a singularly impracticable nature. As for knowledge of food stuffs and diet, senior Student's ignorance of this branch of biology would be laughable were it not a national menace. The whole structure of education in anatomy and physiology needs a ruthless attack with pick axe and dynamite. The most devastating commentary I have known on modern anatomical teaching is provided by a medical students when he arrives at ward hospital fresh from his anatomical teaching studies confronted by a patient and wishing to apply his anatomical lore he is inches out in locating the stomach.

Hence the Siddha emphasis on usefulness of the "Tattvas" Chapter IV can be well appreciated. Special attention is invited to the chapters on Tridosha, the Pulse, and the Moral Code for the Physician. Chapter 20 deals with general principles of therapeutics. There are ample materials on children's diseases, sexual science, nursing, personal hygiene, and sanitary principles which require proper research and codification, and these points cannot be dealt with in the present volume.

The greatness of its chemistry has been accepted and there are still many hidden unexperiment by the ordinary physician. The wonderful book "Amirthakalaignanam" contains ample references to various minerals and drugs, some of which have yet to be brought into the light of practical experiences. Researches in this direction are urgent and national treasure should not be wasted. When medical researches in the West is advancing by leaps and the question that the Siddha view will give a clue to his and many other difficult problems. Only the barest outlines have been indicated on several useful subjects as the Pulse and the Tridoshas and the diet.

There may be mistakes and short comings in this book and this being the first of its kind, indulgence is solicited.

In certain contexts quotations from modern works have been freely used and as references have been made to the sources, I express hereby my indebtedbess.

I beg to be excused for the delay in bringing out the book and it was due to circumstances beyond my control such as domestic calamities.

My most hearty thanks are due to M.R. Ry. V. Rajagopalan, M.A.L.T., F.M.U., Headmaster, Broad High School, Erode for the very valuable help rendered in translating the difficult verses, in correcting my manuscripts and in the presentation of the themes. My thanks are also due to Dr. K. Ranganadan L.M.&S., Honorary Physicain, Governement Hospital, Erode for his very kin suggestions and advice and also for allowing the use of his library, from time to time. 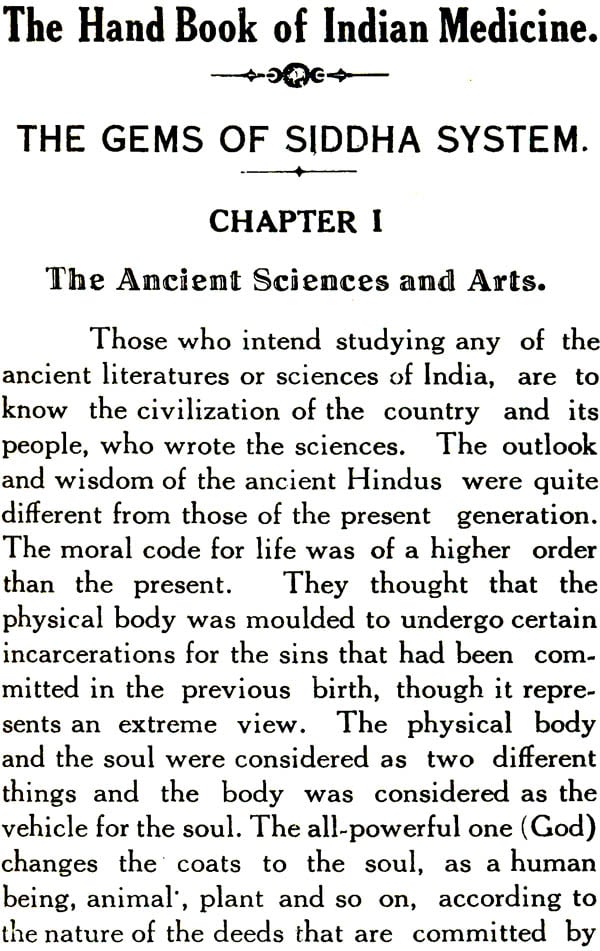 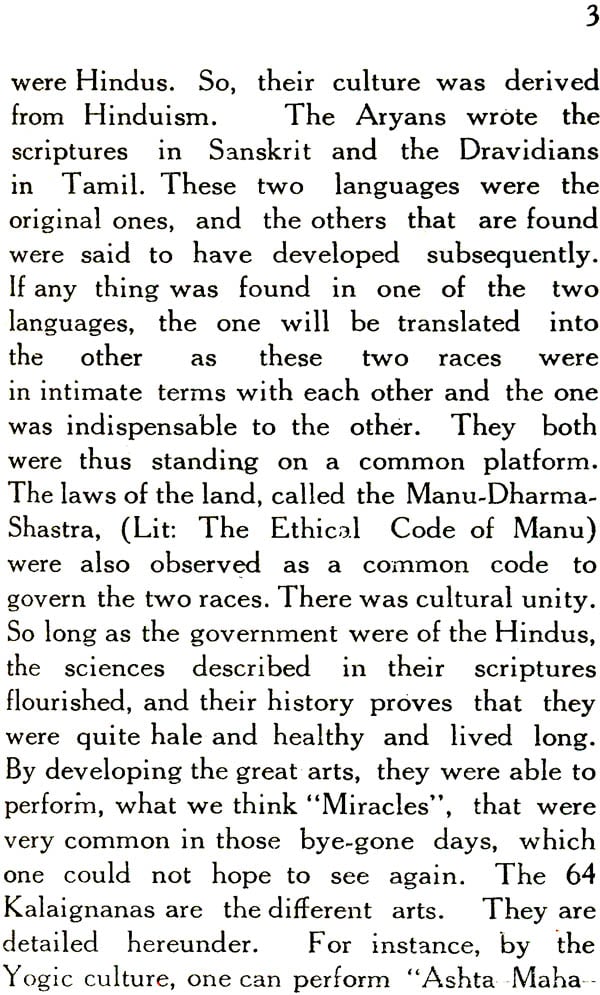 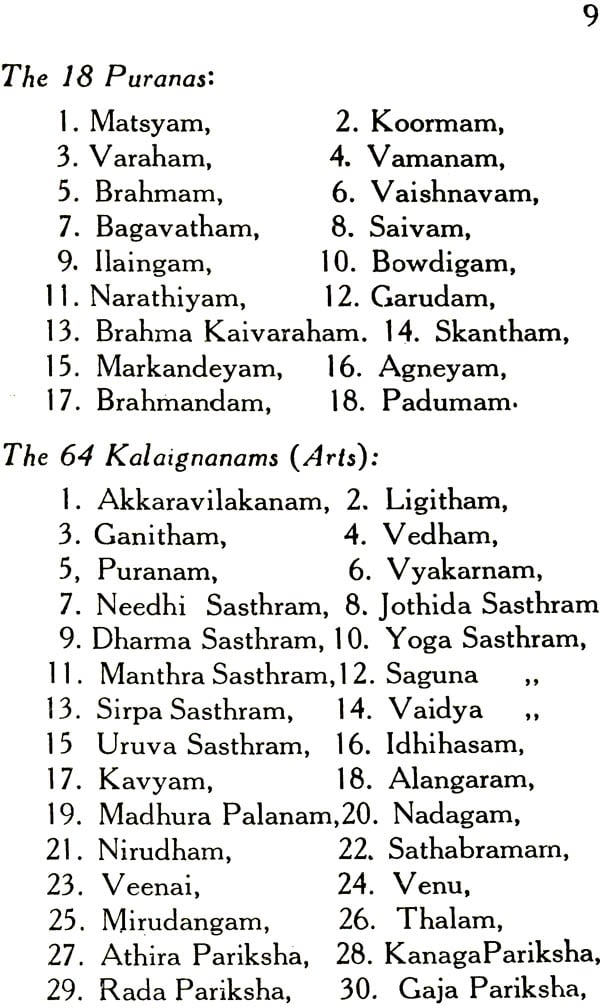 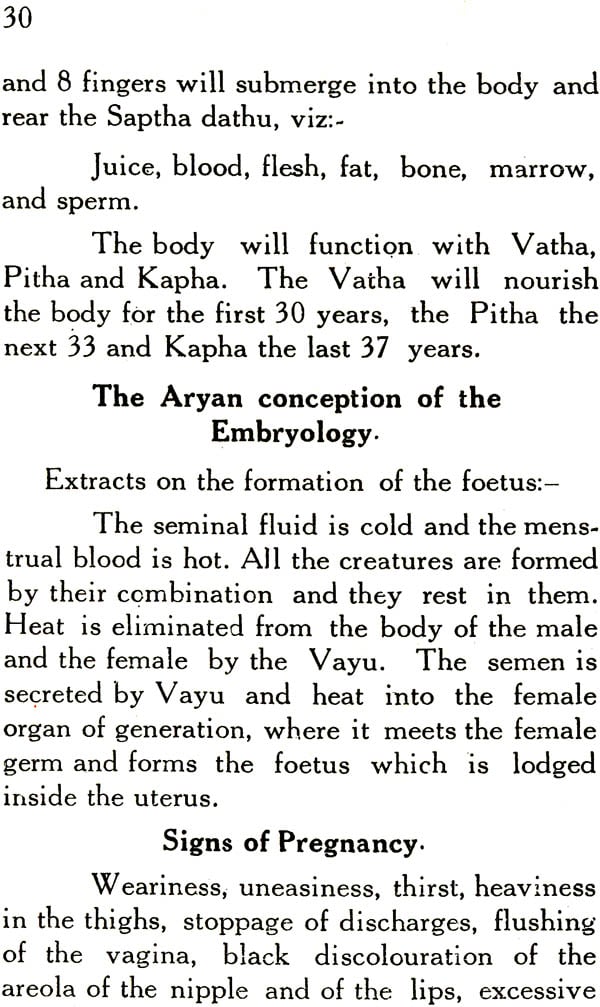 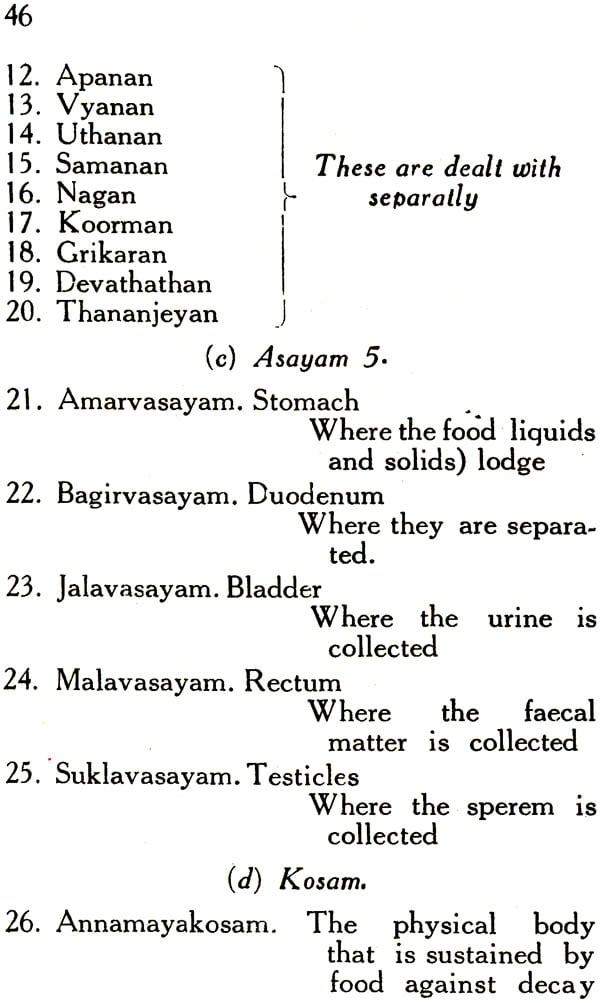 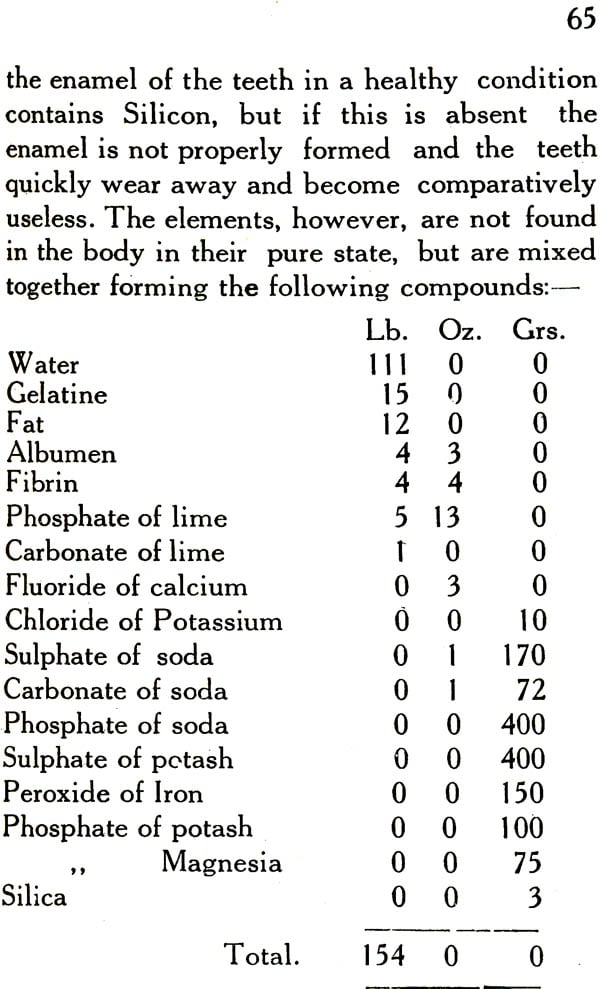 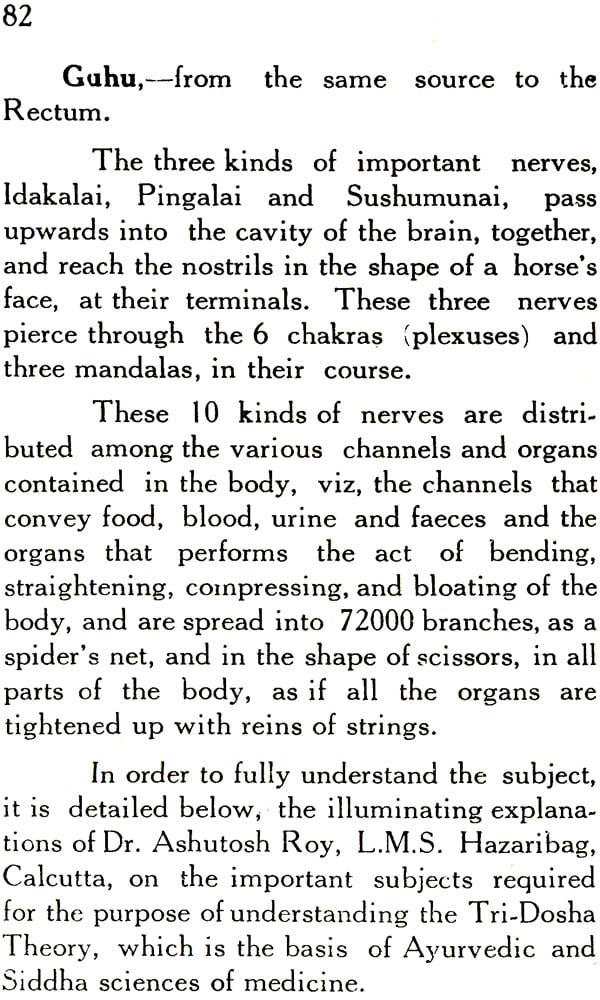 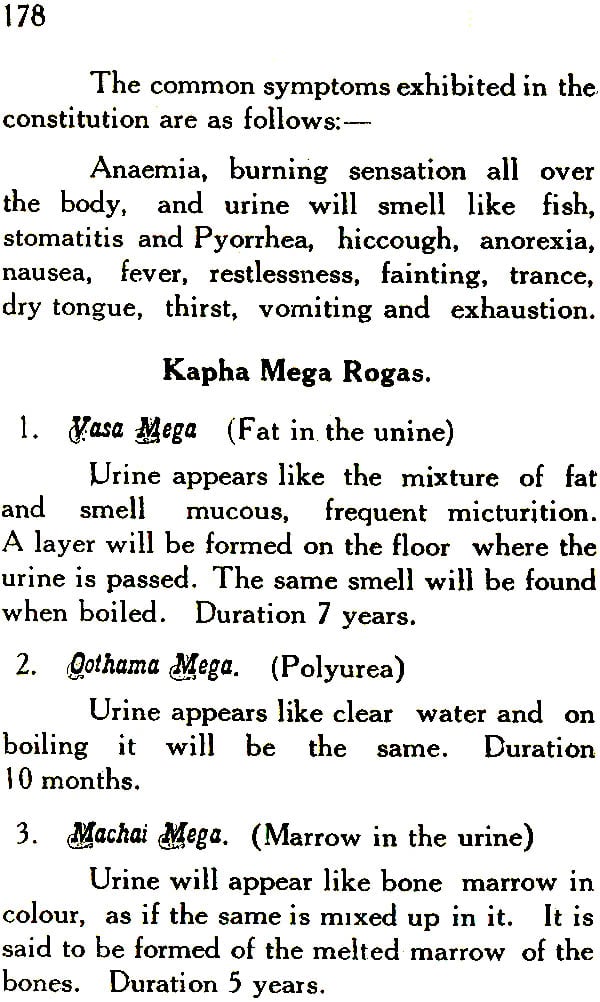 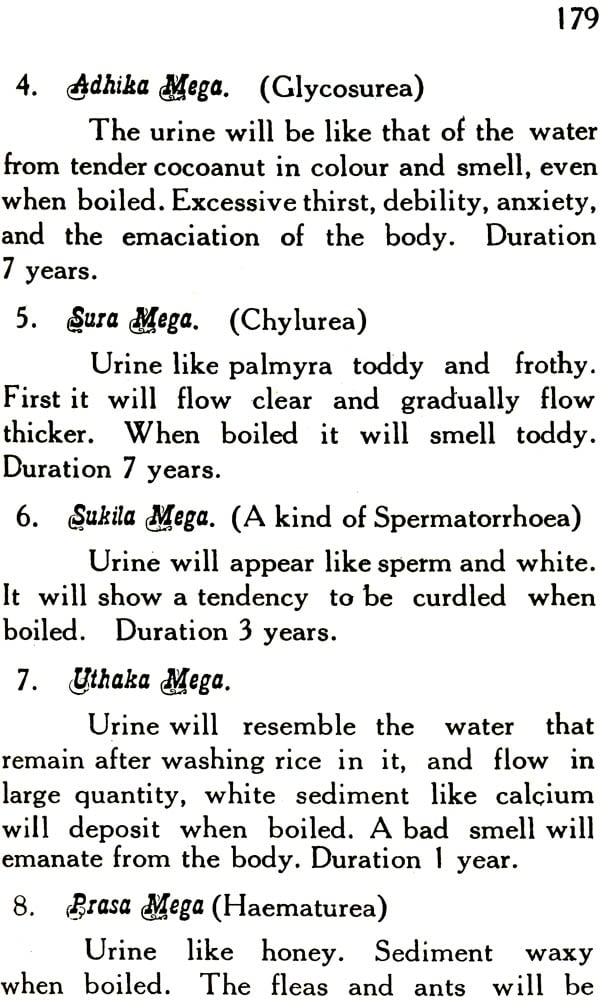 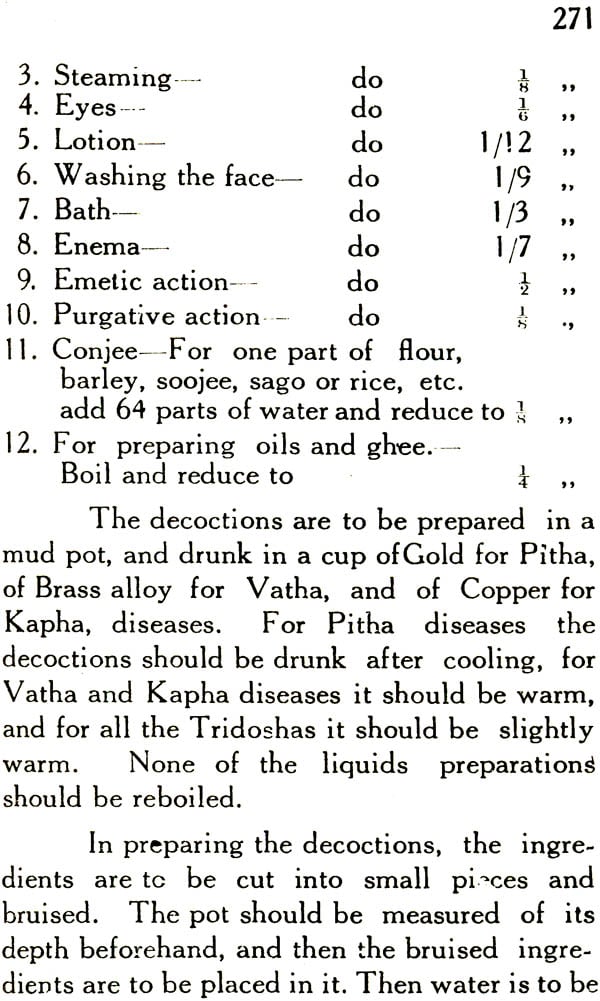 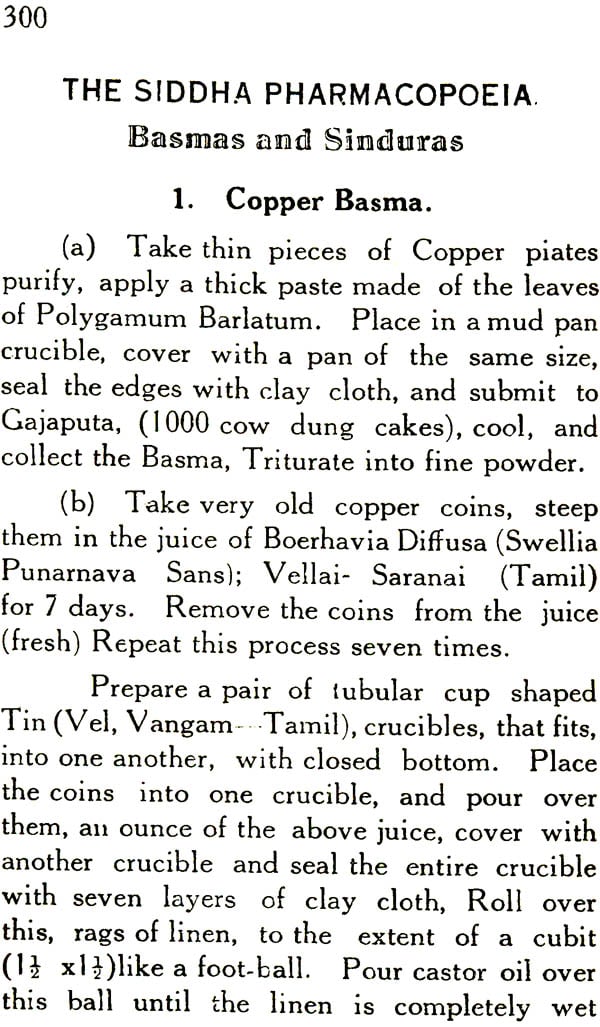 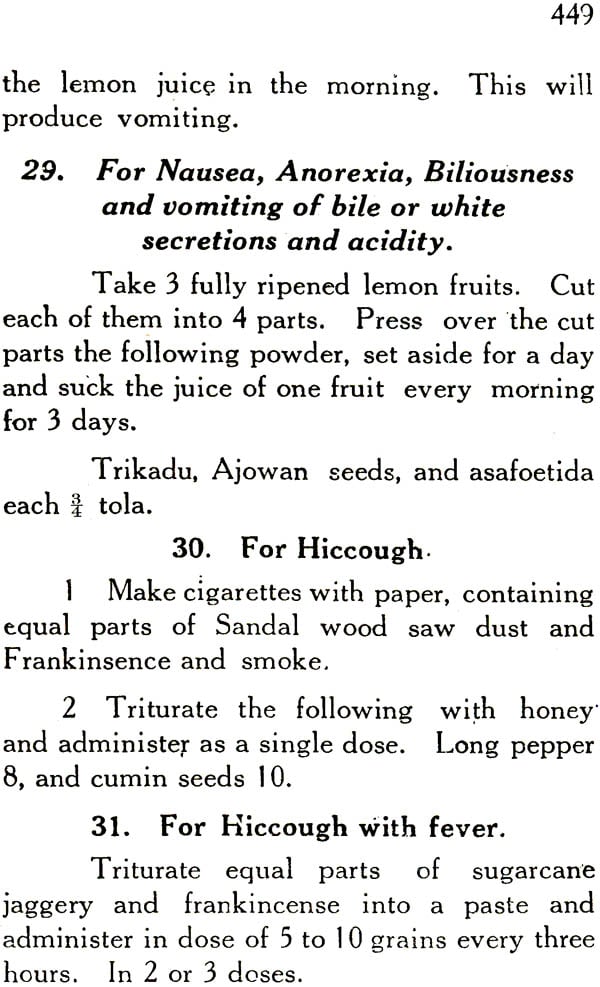 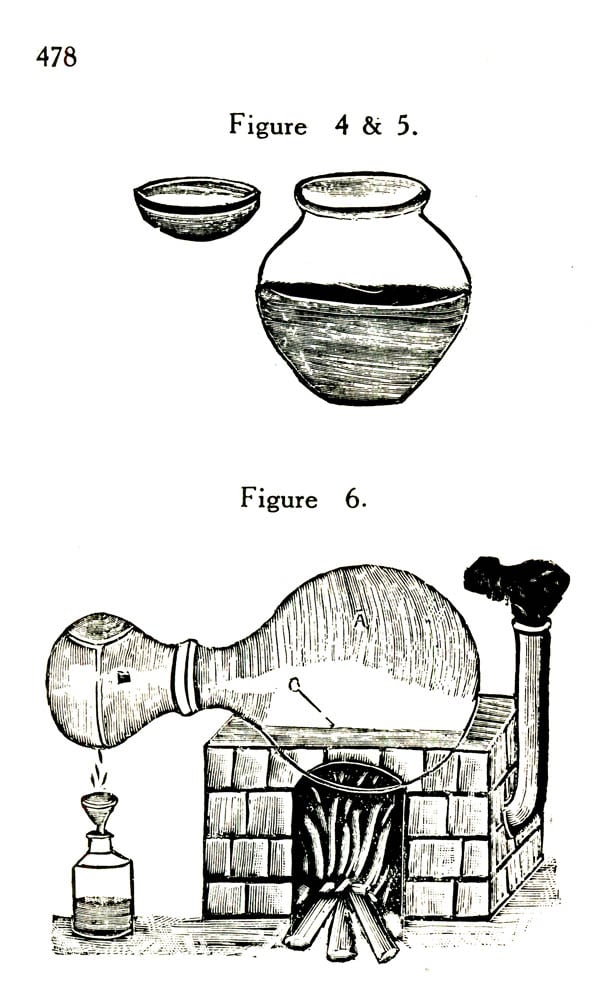 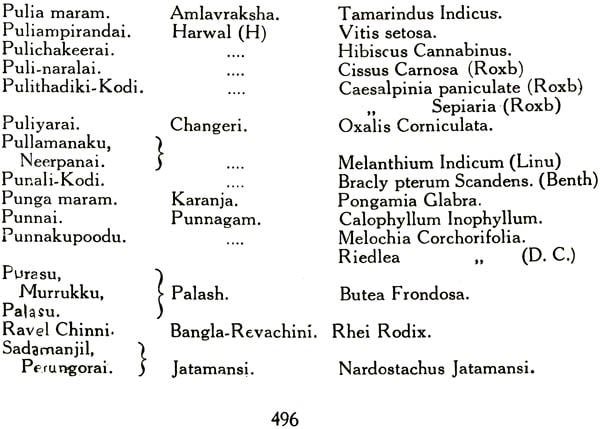 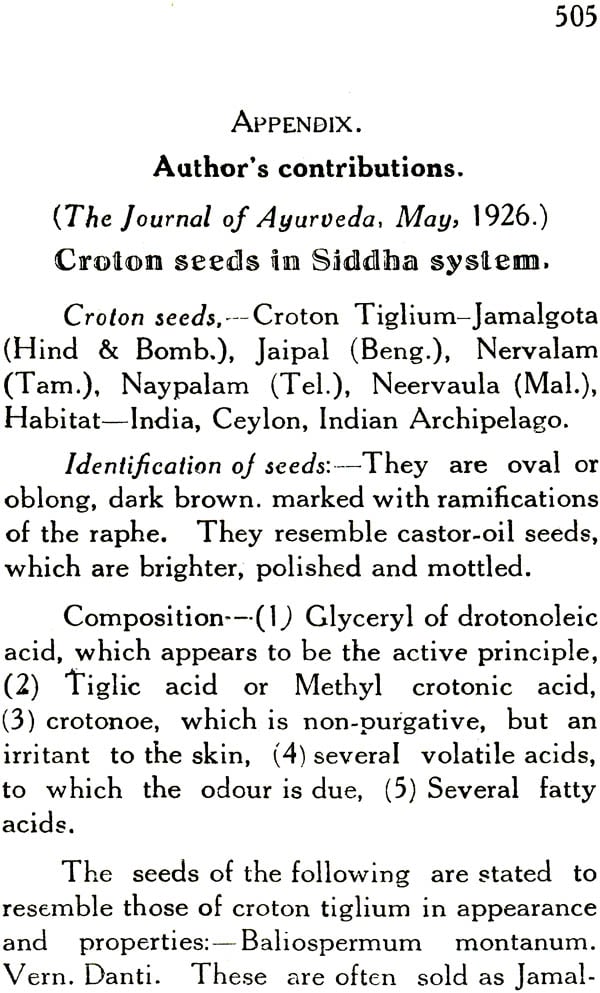 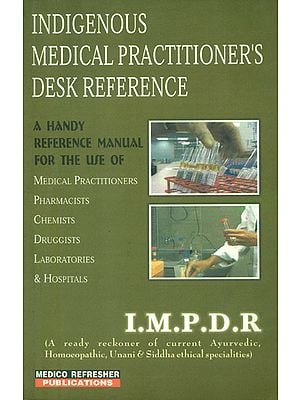 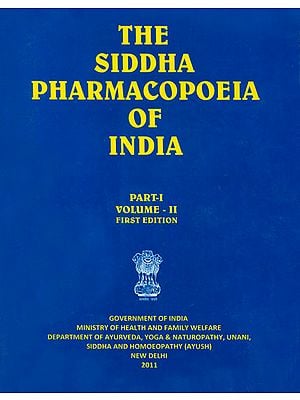 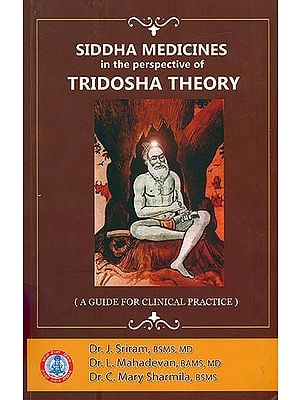 Siddha Medicines in the Perspective of Tridosha Theory (A Guide For Clinical Practice)
By Dr. J. Sriram
$29.00 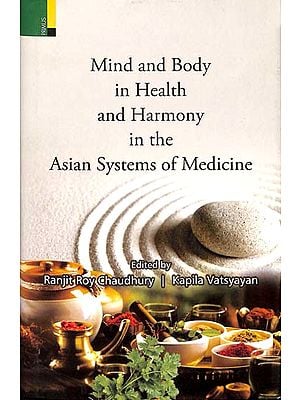 Mind and Body in Health and Harmony in The Asian Systems of Medicine
By Ranjit Roy Chaudhury & Kapila Vatsyayan
$29.00 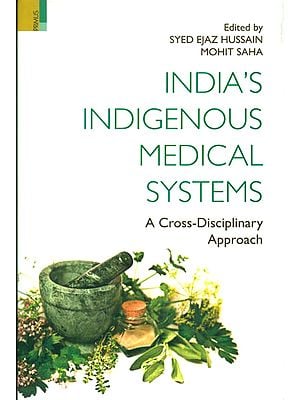 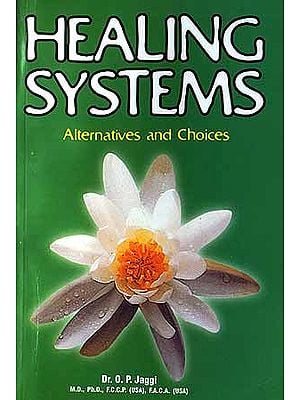 Tibetan Medicine and Other Holistic Health-Care Systems (Foreword by His Holiness The Dalai Lama)
By Tom Dummer
$28.50 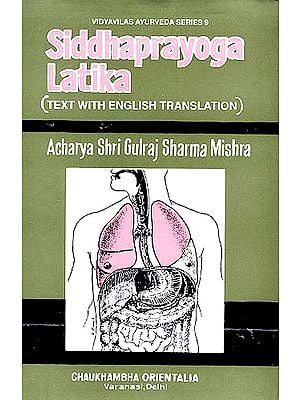 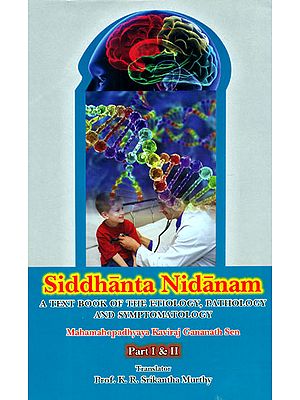 Siddhanta Nidanam: A Text Book of the Etiology, Pathology and Symptomatology (Parts I and II)
By Prof. K.R. Srikantha Murthy
$30.00

Astanga Hrdaya of Vagbhata (Sutrasthana and Maulika Siddhanta)
By Dr. B. Rama Rao
$31.00