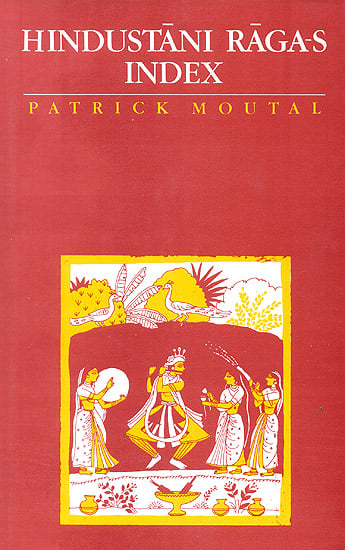 Hindustani Raga-s Index will prove quite useful to all musicians, scholars and students of music who need to consult the main contemporary Devanagari texts on Raga-s descriptions, compositions and Vistara-s. Browsing through the many tables of contents of these works (often in several volumes or parts) in order to extract required information is a time- consuming activity and Moutal’s books, although non-exhaustive, will be a tremendous time saver for consultation.

The present work covers 2821 bibliographical references of 665 names of Raga-s found in 33 Devanagari texts (in 79 volumes) by 22 major authors.

Patrick Moutal is professor of Indian Masic at the Conservatoire National Superieur de Musque de Paris. He started studying instrumental music (sitar) at Banaras Hindu University from 1970 and completed a Doctorate in Performance and compositions (DMus) in sitar in 1983. In france he was awarded the French distinctions of “Chevalier des Arts et des letters.” He is a member of the French Ethno musicological society and has also produced a number of L.P. recordings and radio broadcasts. He has published Hindustani Raga Sangita. Une etude de quelques mecanismes de base (CEMO). His another book A Comparative study of Selected Hindustani Raga-s based on Contemporary practice is also published by us.

The idea of such a work came to me quite some time ago as I was a student of the faculty of performing Arts, Banaras Hindu University, where I remained from 1970 to 1983 until completion of a doctorate of performance and Compositions (sitar).

During all these blessing years, my teacher, Dr. K.C. Gagrade (former head of instrumental Dept. and Dean of the Faculty), taught us (and succeeded in transmitting) his love and appetite for permanent research into Raga-s not only through attentive listening, singing and instrumental playing but also through the study of the best contemporary literature on Raga-s.

These major, outstanding works have been, for the greater part, written in Hindi and bring Raga analysis to an extremely high level. That is how we find, within arm’s reach, Raga descriptions, calana-s comparative studies and superb Bandisa-s all for the taking if we know where to took and that is where the problem starts.

Books like V.N. Bhatkhande ji’s Sangita Sastra analyse a great number of Raga-s which you find at several places in the four volumes, other works give only descriptions, or compositions, or descriptions and compositions and also Vistara’s sometimes at different places therefore, it quickly becomes a tire some affair to look through the contents of each and every book to fish out the required information.

That is why, like other students and teachers, I came to organize al the available data into a bristol card classification system which was troublesome, not always handy and slow to consult.

The story continues in Europe, in the midst of a computerized environment where I quickly found out that these modern technologies could be more than gadgets and become very useful for such types of classifications. Moreover, word processors, could give a fairly clean presentation of the text and thus, greatly help in reducing publication costs.

Recomposing a comparative study of Hindusthani Raga-s on a Macintosh computer and, need of accurate bibliographical references, I finally decided to undertake the task of writing this Hindusthani Raga Index.

It covers 2821 bibliographical reference of 665 names of Raga-s found in 33 Devanagari texts by 22 major authors.

Sorting out in alphabetical order has been operated on three levels: name of the Raga, author’s name title of work.

Referances have been sorted out into three types Raga’s description, compositions, Vistara-s.

For rapid consultant, a general Raga Index, referring to the page number has been included at the end of the book.

The work completed, my only hope is that this Hindustani Raga-s index will prove to be as useful to others as it is for me.

Making a Raga Index is not an easy task when it comes to organizing a selection of the authors and their works.

It may seem at first that a certain amount of subjectivity will naturally creep in, but things quickly get clear a number of Hindi books irrespective of their Gharana-s are outstanding in the real sense of the term. They are the contemporary bibles of Gaga Sangita and cannot be bypassed. Of course, the choice was also guided by their availability and, in this respect, I regret not having taken into account the works of Pandit Vishnu Digambar Paluskar which have been out of print for quite some time. Fortunately, his disciples and more particularly, Pandit Vinayak Rao Patwardhan, have left us a great amount of literature of Raga-s and I pray that it will partially make up for this omission.

Actually, the subjectivity problem arose for a number of secondary texts which could have been or not included in this book. Thus, I originally entered a number of authors which I finally discarded as they would have been out of place in the midst of great scholars such as Pandit V.N. Bhatkhande, Pandit S.N. Ratanjankar, Pandit Vinayak Rao Patwardhan, Pandit Om- Karnath Thakur and the like.

Morever, I had to face the same problem regarding the very few texts in English, language on the subjection. At the risk of offending their authors, I could not compel myself to take into consideration such books which either by total lack of erudition or because of out dated information would have misled the reader more than helped him get a deeper insight into the analytical world of Raga.

Therefore, out of these texts written in English, I only retained B. Subba Rao’s Raganiddhi and even so with a certain restraint because his work, a catalog of Hindustani and Karnataka Raga-s is not devoid of shortcomings. They deserve to be reviewed.

Of all the authors cited, he has undoubtedly itemized the greatest number of Raga-s and is mainly responsible for the incredible number of 665 names of Raga-s attained Indeed, while going through this Hindustani Raga Index, the reader will a great number of Raga-s which have not been described by anyone else.

Many of the Raga-s cited, product of some weird mixtures, must have only been played once by a musician and have not come to be accepted by the Hindusthani versions of Karnataka Raga-s which he may have heard being experimentally performed once by some musicians on.

Framkly speaking he seemed to have a better mastery over south Indian Raga-s than over Hindusthani ones. That could probably account for a number of mistakes found in his work moreover, his systematic tendency to understand to several versions for a number of Raga-s a true typomania’s has brought fourth. At places an incredible mess…

Last of all, B. Subba Rao has not given the names of Raga-s in a transliterated form (with diacritical marks) or in Devanagari. Moreover, he did not standardize his anglicized way or writing. Thus, his approximate spelling becomes a very confusing affair at times.

But, despite all its shortcomings, his work commendable attempt to catalog all Northern and Southern Raga-s deserved to be respected and included and included in this bibliographical Raga-s Index.

In conclusion the impressive number of Raga-s found is quite indicative of a major problem. Many Raga-s hybrid, bastards or dissymmetrical, totally lack of intrinsic beauty. They are what Dr. K.C. Gangrade calls Brain teasers their only pole of attraction resides in what they borrow from other forms. Many of those are the product of an unhappy mistake, of the excentricity of an artist who craves to amaze his fans, or of a faulty transmission. The worst is that some of them manage to find their way into the sastra and thus, pass on to posterity. Actually such Raga-s does not bring anything and unnecessarily burden Hindustani repertoire already so rich in gems. It does not mean that a number of modern creations will not rightfully be adopted by the tradition time alone will tell but it is high time to leave aside these freaks and to pusue the efforts of standardization of Raga forms first undertaken by Pandit V.N. Bhatkhande.

In conclusion and despite the none exhaustively of its sources, I hope that the present text, comprising of 33 works, in 79 volumes, by 22 authors, can rightfully offer most of outstanding contemporary bibliographical references on Raga-s.