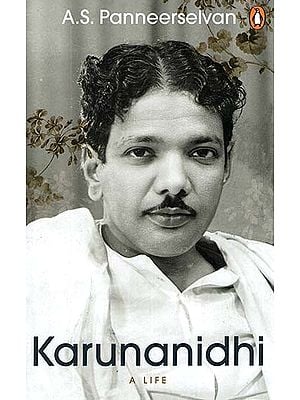 FREE Delivery
$47
Karunanidhi's political career, beginning nine years before India attained independence, stretched over eight decades. No one else in independent India has led his or her party for as long as he did: he became the leader and symbol of the Dravida Munnetra Kazhagam following the death of C.N. Annadurai in February 1969 and remained leader, despite his declining and then failing health, until his death in August 2018.
Quantity
Ships in 1-3 days
Notify me when this item is available

‘Karunanidhi: A Life does justice to the ambitious twin tasks undertaken by the biographer—to tell the story of one born and raised in deprivation, who suffered hardships and stigma on account of both his caste and class, but who "through sheer imagination, articulation, hard work and a zest for life transformed himself into a statesman and renegotiated power for millions and secured self-respect for them"; and through this story get "an insight into the workings of the modern Indian state".’

A.S. Panneerselvan is currently the readers' editor of The Hindu. He has served as the newspaper's independent, full-time internal ombudsman since 2012. Apart from being a regular columnist, he is also an adjunct professor at the Asian College of Journalism, Chennai. His wide experience in both print and television journalism includes extensive reporting on conflicts in Sri Lanka, Kashmir and India's north-east region. A board member of the Organization of News Ombudsmen and Standards Editors representing Asia, he has also served as the steering committee member and vice chair of the Global Forum for Media Development between 2005 and 2018. He is a member of the governing board of the K.M. Adimoolam Foundation for Arts in Chennai and was a fellow of the Reuters Journalism Fellowship programme at the University of Oxford. Panneerselvan has lectured widely on politics and the media in the US and Europe.

Tor several decades,' I wrote recently in another context, Muthuvel Karunanidhi (1924-2018), 'was political India's senior-most statesman, one of its consequential figures, with a legendary reputation for versatility, political resilience, legislative acumen and administrative capacity, lifelong literary and cultural engagement, emotional intelligence, empathy with the socially and educationally backward, and fighting spirit.' I don't believe anyone who is not determinedly antagonistic on ideological, personal or purely subjective grounds to the man and the causes he stood for will have much to cavil about this assessment. The facts speak for themselves.

Karunanidhi's political career, beginning nine years before India attained independence, stretched over eight decades. No one else in independent India has led his or her party for as long as he did: he became the leader and symbol of the Dravida Munnetra Kazhagam following the death of C.N. Annadurai in February 1969 and remained leader, despite his declining and then failing health, until his death in August 2018. Ever the organization man, he worked tirelessly to help build a cadre-based party as part of a social movement. It was this work ethic, supported by a well-structured organizational base and a consultative style of leadership (which must not be confused with collective leadership), that enabled the Dravida Munnetra Kazhagam (DMK) to sustain itself over seven decades as a live, robust and impactful player in state and national politics. That this happened in the face of one major and debilitating split and three less significant breakaways is a measure of the DMK leader's political resilience and personal equanimity. He was the chief minister of Tamil Nadu five times, although two of those terms were cut short by autocratic Central government intervention citing constitutionally fraudulent grounds. Never tempted to stray outside his chosen field of Tamil Nadu politics and governance, he nevertheless succeeded in carving out for his party, and as an unintended consequence, for his party's main electoral rival, the Anna Dravida Munnetra Kazhagam (ADMK), a prominent and outsized role on the national political stage.

Strikingly, the Karunanidhi era witnessed what seemed like a permanent end to rule in Tamil Nadu by a so-called national party. From a long-term perspective, it did not matter much that this era was marked by the electoral dominance, for a whole decade, of the split-away All India Anna Dravida Munnetra Kazhagam (AIADMK), which was formed in 1972 by the charismatic M.G. Ramachandran, or that subsequently power had to be shared, with alternating spells of electoral success, with governments led by the almost equally charismatic J. Jayalalithaa. Despite being political antagonists, both AIADMK supremos and chief ministers seemed to have learnt lessons from the master tactician, unacknowledged of course, on how to play the game on the national political stage. Crucially, for all the twists and turns and opportunist manoeuvres in the alliance politics of the AIADMK and the DMK, Tamil Nadu has managed to keep itself free from the sway of toxic and highly damaging Hindutva politics. Karunanidhi must be given a significant share of the credit for keeping it that way.

Journalism is generally defined as literature in a hurry. Ironically, as a journalist, my biography of Muthuvel Karunanidhi has been in the making for long. Indeed, too long. The book was first thought of in 1991, when Dravida Munnetra Kazhagam's (DMK) electoral fortunes had hit rock bottom in Tamil Nadu, to critically trace the political trajectory of the Dravidian Movement. Over time, I came to realize that this story could be told through the life of Karunanidhi. Penning the book assumed some urgency after his infamous midnight arrest in 2001. But because of my professional commitments and various other reasons, it could not be completed until now. Perhaps it is all for the better.

When I embarked on this project, many expressed deep reservations about it. Fellow journalists alerted me about the difficulties of documenting the political career of a leader like Karunanidhi. There were multiple narratives about almost every event in his life and no foolproof way of gleaning the truth from this polyphony.

In 1991, the DMK had suffered its worst electoral defeat since it started contesting polls in 1957. Karunanidhi was the lone winner, by a slender margin, and he resigned from the House, owning responsibility for the poll debacle. In an ironic twist of fate, a Tamil Brahmin, Jayalalithaa Jayaram, came to power with a massive mandate. The media was celebrating the victory of Jayalalithaa and busy writing an epitaph for Karunanidhi and the DMK.

To make matters worse, nothing seemed to work well for the DMK. Within two years of this humiliating defeat, the party suffered its fourth split in 1993. The first split was in 1961, when E.V.K. Sampath and others left the party to float their own outfit, which eventually merged with the Congress. The second was in 1972, when M.G. Ramachandran was expelled, and he went ahead to form Anna Dravida Munnetra Kazhagam (ADMK). The third split, led by one of the founders of the party, V.R. Nedunchezian, was in 1977. The fourth instance was in 1993, when nine powerful district secretaries walked out of the DMK along with V. Gopalsamy (Vaiko), who claimed to have split the party vertically. The splinter party, named Marumalarchi Dravida Munnetra Kazhagam (MDMK), also secured the support of the Communist Party of India (Marxist) (CPI-M).

From 1991onward, India witnessed a major shift in political vision, with its fallout for all political parties. The mixed economy model developed by Nehru, and further strengthened by Indira Gandhi, was dismantled. The Sensex entered the daily parlance of the media, and there was a valorization of the growing clout of the 250-million-strong middle class. The country's tilt rightward was evident in the upswing of the Bharatiya Janata Party's fortunes and the demolition of the Babri Mosque. In this paradigm shift, there seemed to be no space for the DMK and its leader. `Karunanidhi's brand of social justice and secular polity has run out of steam,' declared DMK-baiter, Cho Ramaswamy.

The impact of the Mandal Commission and the changing social background of the leadership in the northern states like Uttar Pradesh, Bihar and Madhya Pradesh created a new interest, nationally, in the role of the Dravidian Movement. The political upheavals in Sri Lanka also brought into sharp focus the Dravidian Movement and its struggle for political rights. Linking the Sri Lankan Tamils' fight for a homeland, the pan-Indian forces were quick to raise an old accusation that the Dravidian Movement had 'fissiparous tendencies', a distinctly colonial term. 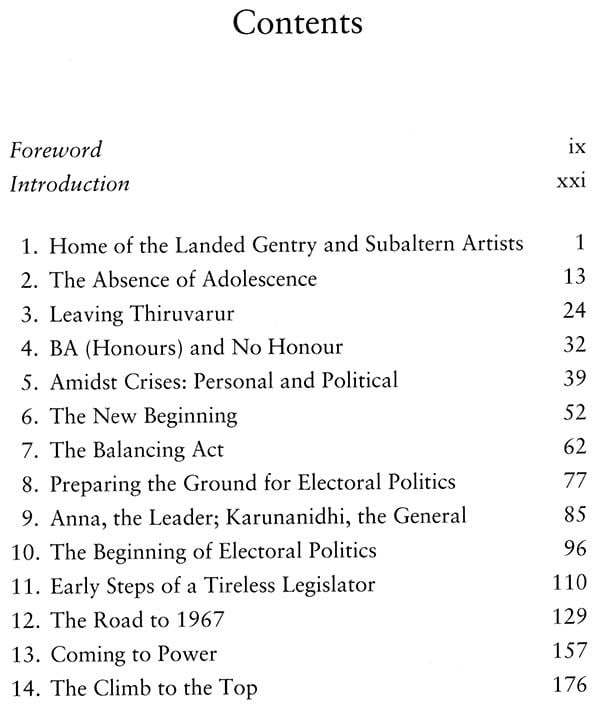 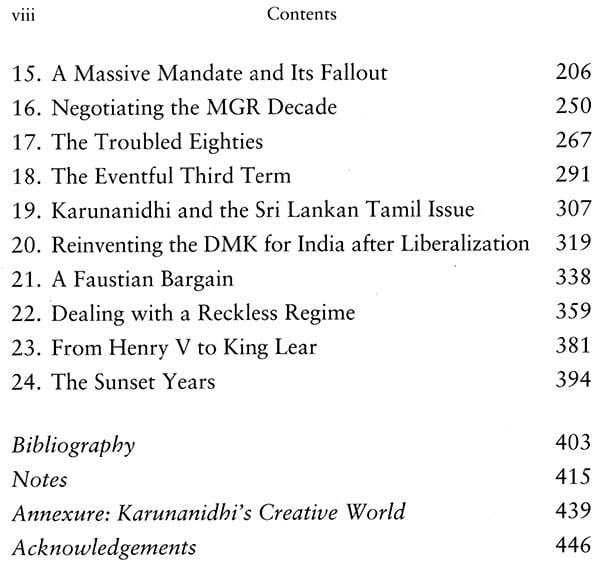 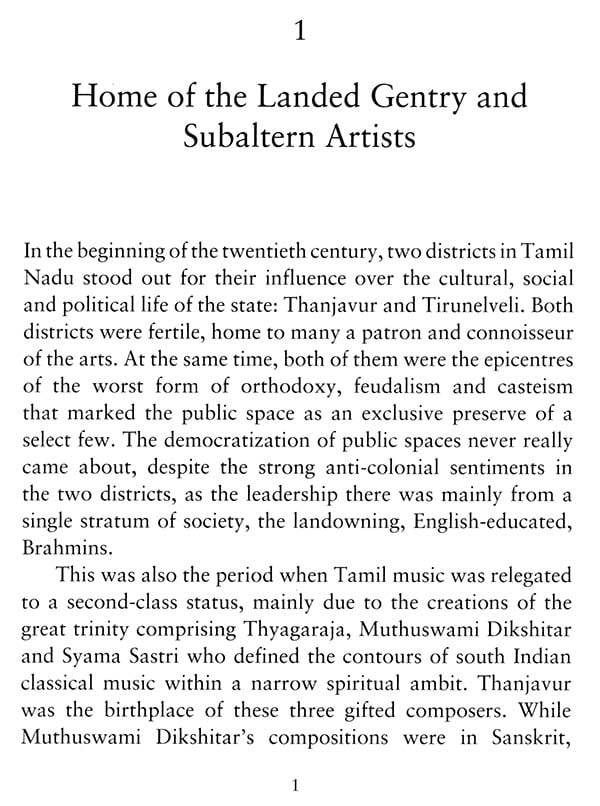 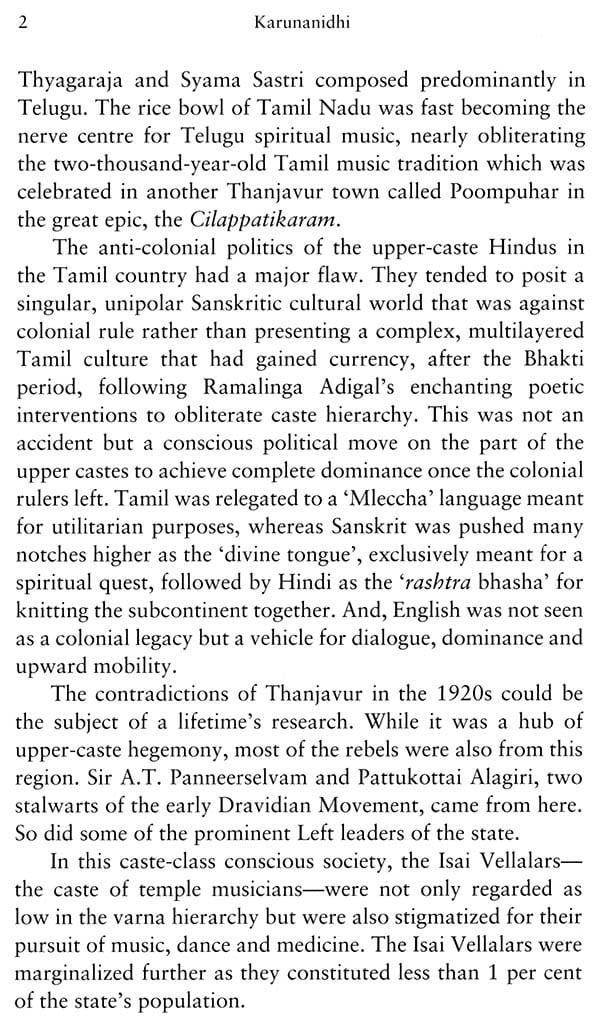 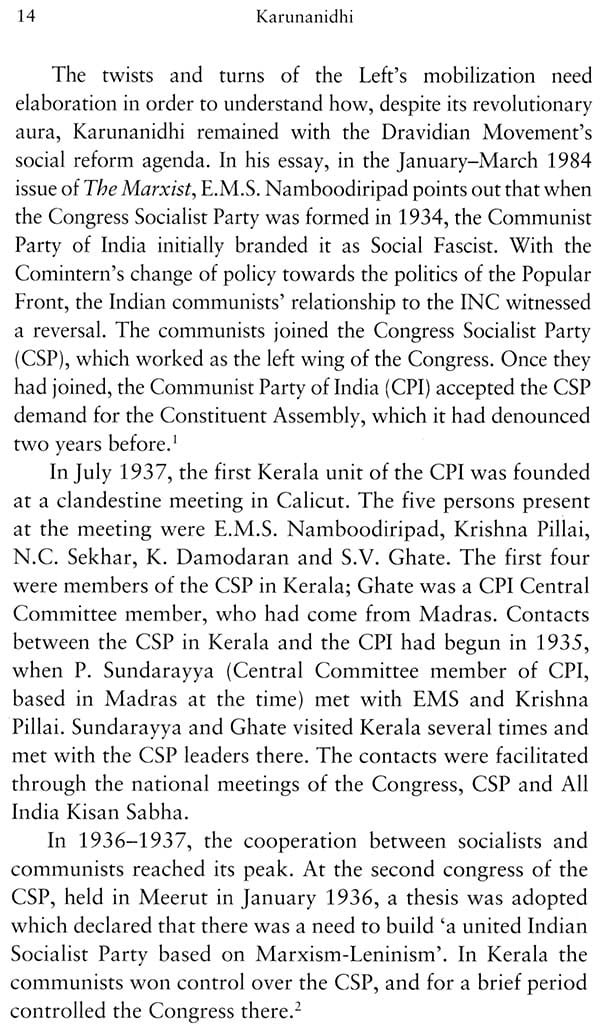 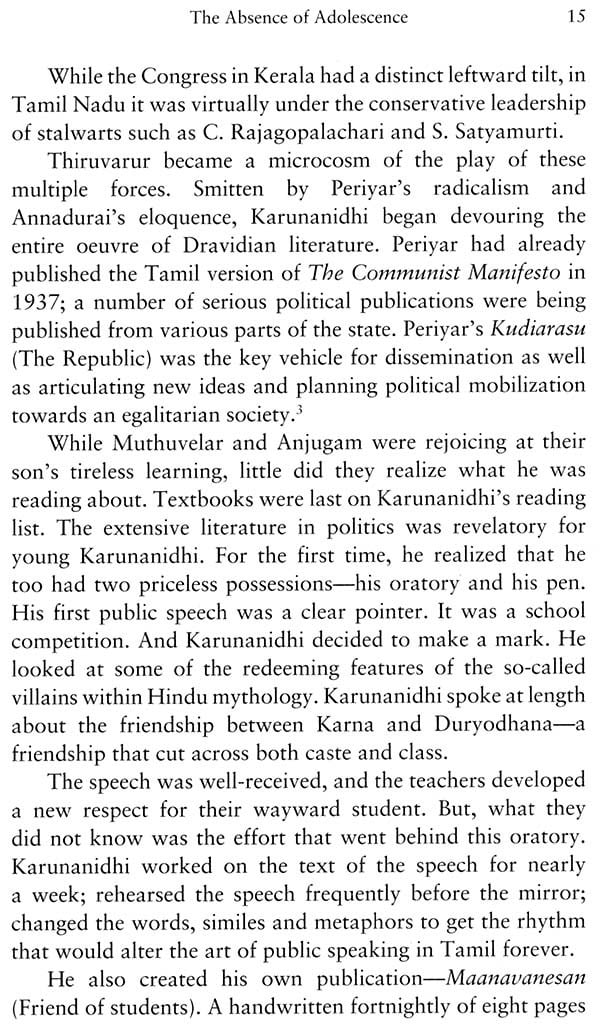 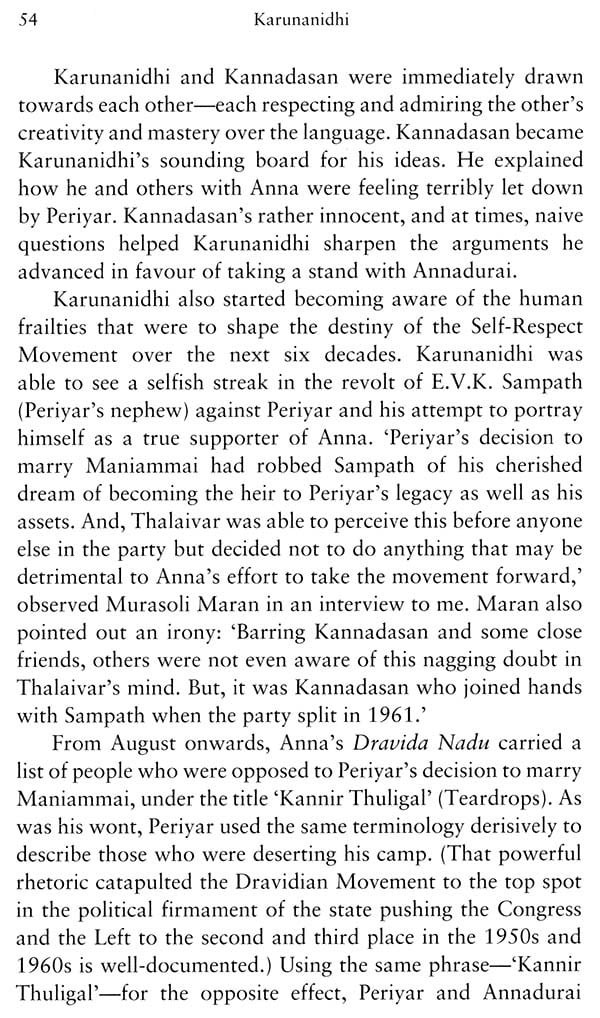 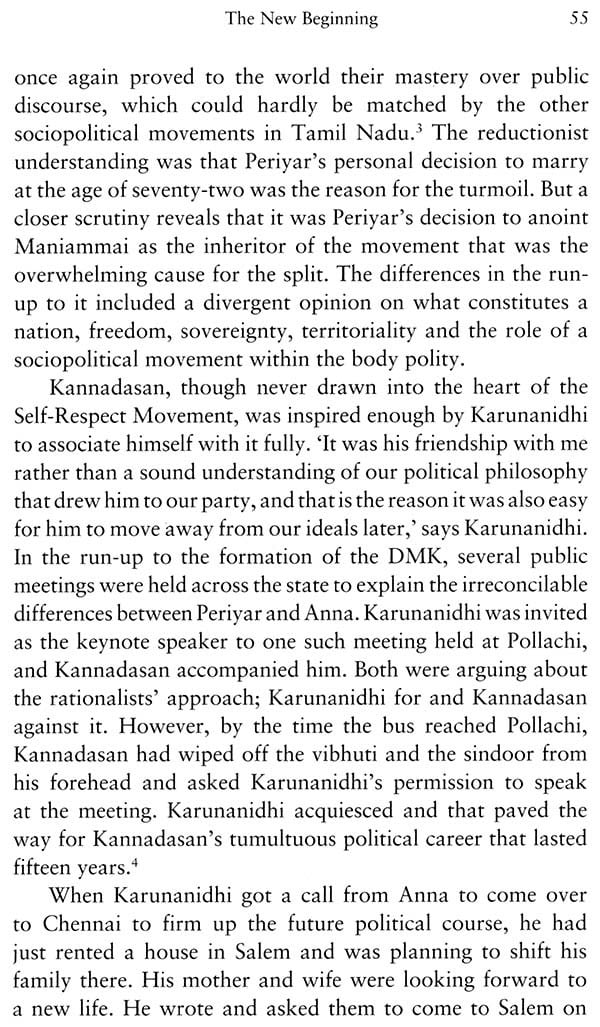 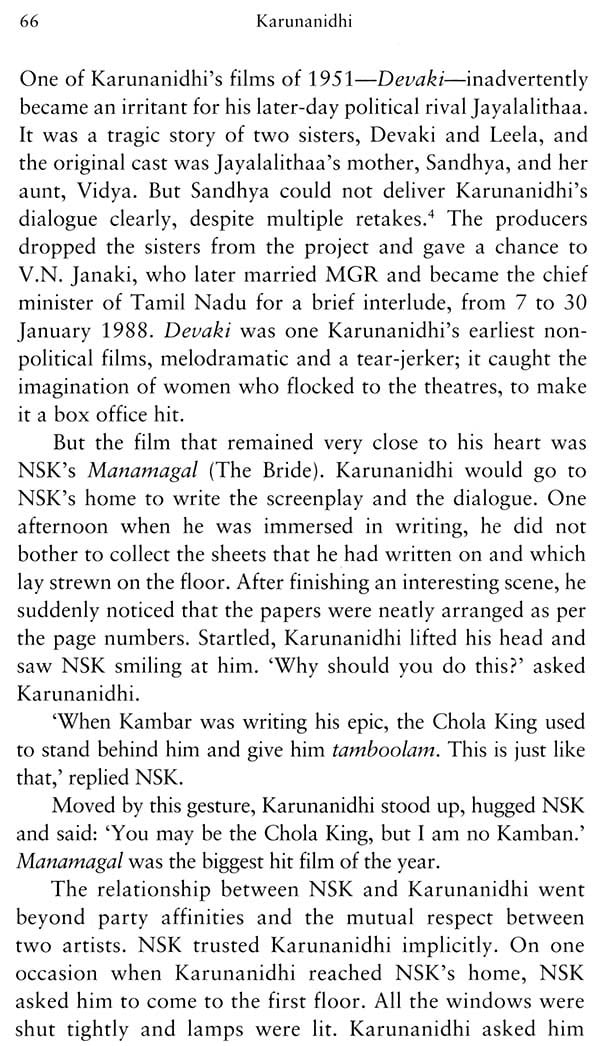 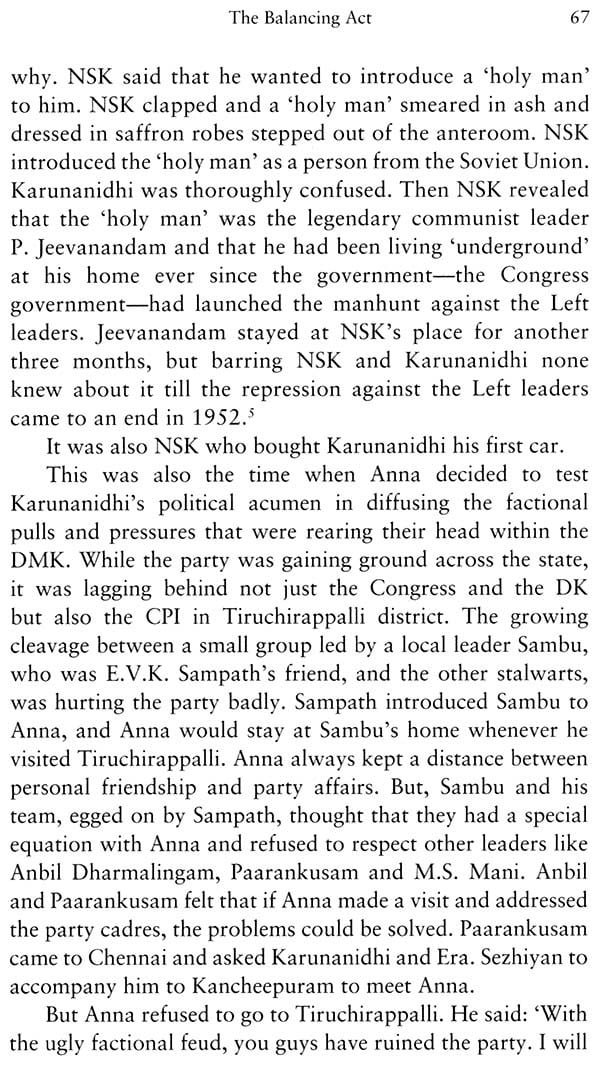 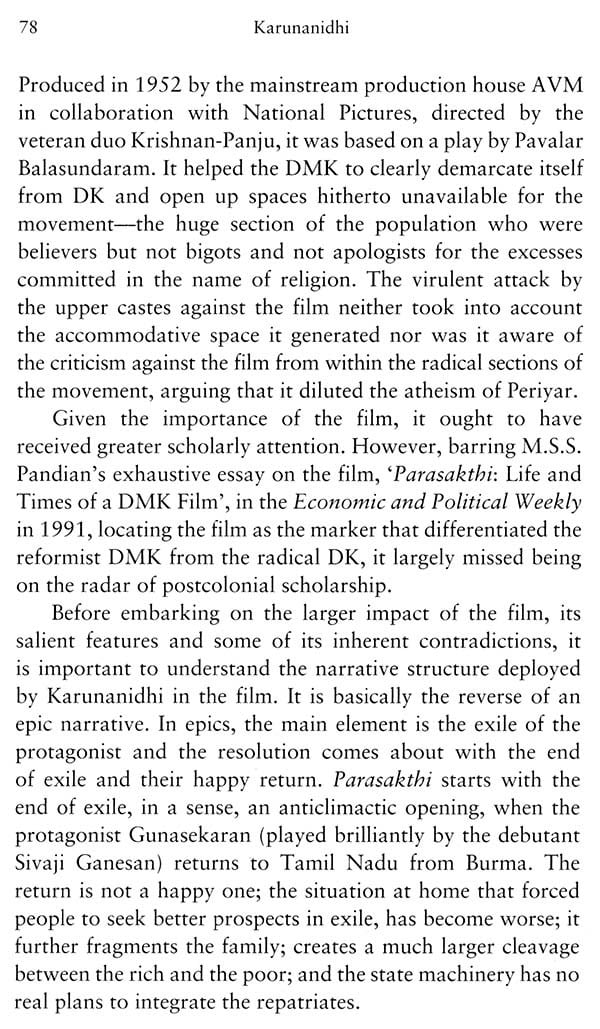 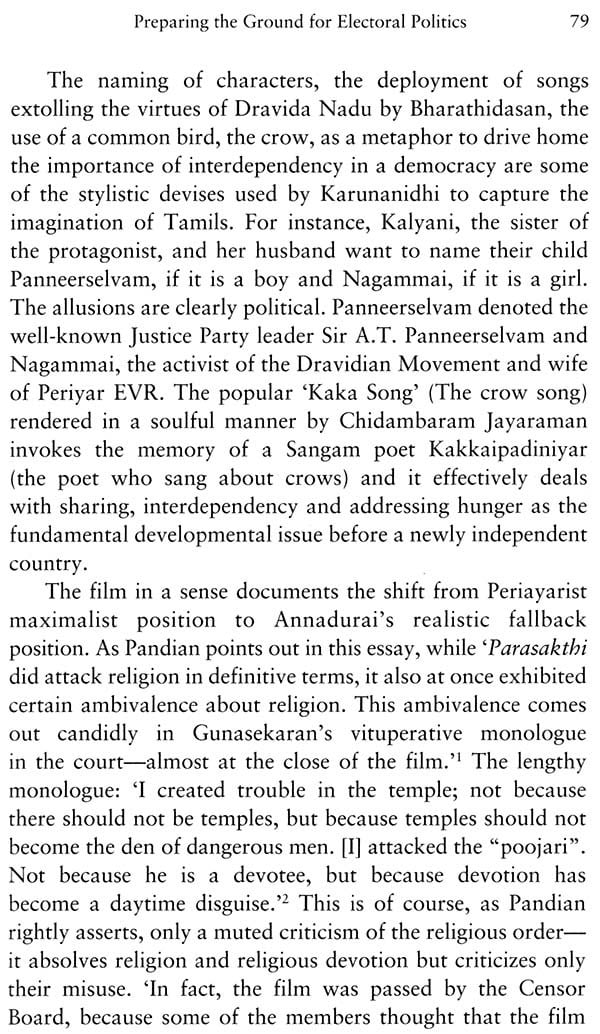 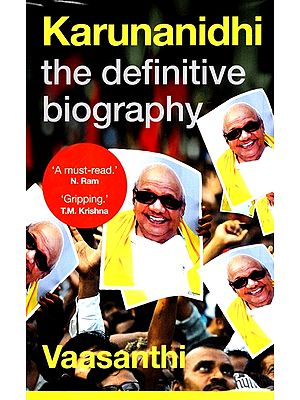 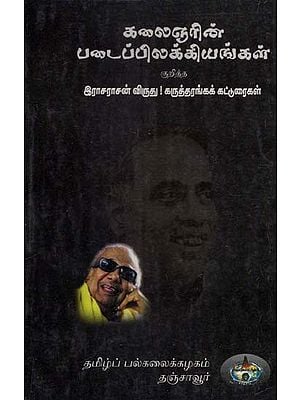 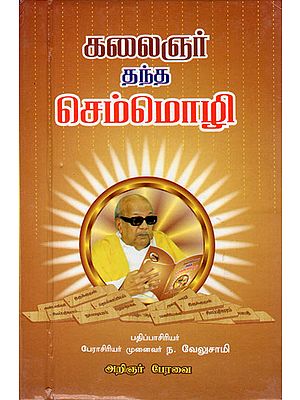 Language Tamil As Given By Kalaignar Karunanidhi (Tamil)
By N. Velusamy
$31
FREE Delivery 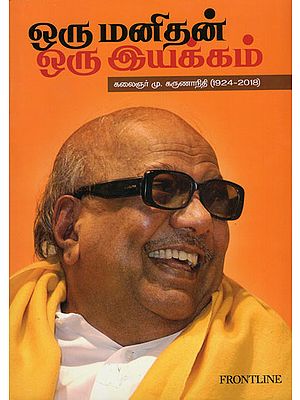 One Individual One Organization Kalaignar M.Karunanidhi - 1924 to 2018 (Tamil)
By M.Karunanidhi
$31
FREE Delivery 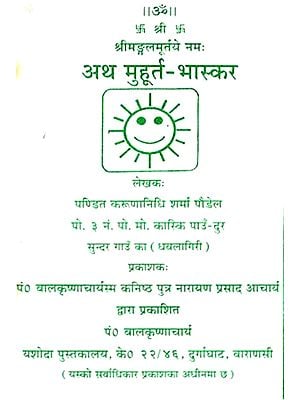 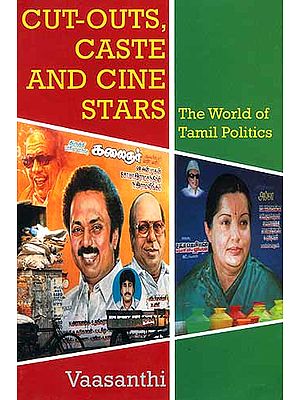