Fully insured
Back of The Book

The Mahabharata is one of the greatest stories ever told. Though the basic plot is widely known there is much more to the epic than the dispute between the Kouravas and Pandavas that led to the battle in Kurushetra. It has innumerable sub plots that accommodate fascinating meanderings and digressions and it has rarely been translated in full given its formidable length of 80,000 shlokas or couples. This magnificent 10 volume unabridged translation of the epic is based on the Critical Edition compiled at the Bhandarkar Oriental Research Institute.

The Final Volume ends the instructions of the Anushasana Parva. The horse sacrifice is held, and Dhritarashtra, Gandhari, Kunti, Vidura and Sanjaya leave for the forest, Krishna and Balarama die as the Yadavas fight among themselves. The Pandavas leave on the great journey with the famous companion – Dharma disguised as a dog. Refusing to abandon the dog, Yudhishthira goes to heaven in his physical body and sees all the Kurus and the Pandavas are already there.

Bibek Debroy is an economist and is Research Professor (Centre of Policy Reserch) and Contributing Editor (Indian express group). He has worked in universities research institutes industry and for the government. He has published books papers and popular articles in economics. But he has also published in Indology and translated (into English) the Vedas, the Puranas, the Upanishads and the gita (Penguin India 2005) his book Sarama and her children. The dog in Indian myth (penguin India 2008) splices his interest in Hinduism with his love for dogs. He is currently translating the remaining volumes of the unabridged Mahabharata.

The Hindu tradition has an amazingly large corpus of religious texts, spanning Vedas, Vedanta (brahmanas, aranyakas, Upanishads,), Vedangas, smritis, Puranas, dharmashastras and itihasa. For most of these texts, especially if one excludes classical Sanskrit literature, we don't quite know when they were composed and by whom, not that one is looking for single authors. Some of the minor Puranas (Upa Purana) are of later vintage. For instance, the Bhavishya Purana (which is often listed as a major Purana or Maha Purana) mentions Queen Victoria.

In the listing of the corpus above figures itihasa, translated into English as history. History doesn't entirely capture the nuance of itihasa, which is better translated as 'this is indeed what happened'. Itihasa isn't myth or fiction. It is a chronicle of what happened; it is fact. Or so runs the belief. And itihasa consists of India's two major epics, the Ramayana and the Mahabharata. The former is believed to have been composed as poetry and the latter as prose. This isn't quite correct. The Ramayana has segments in prose and the Mahabharata has segments in poetry. Itihasa doesn't quite belong to the category of religious texts in a way that the Vedas and Vedanta are religious. However, the dividing line between what is religious and what is not is fuzzy. After all, itihasa is also about attaining the objectives of dharmaartha, kama and moksha and the Mahabharata includes Hinduism's most important spiritual text-the Bhagavad Gita.

The epics are not part of the shruti tradition. That tradition is like revelation, without any composer. The epics are part of the smriti tradition. At the time they were composed, there was no question of texts being written down. They were recited, heard, memorized and passed down through the generations. But the smriti tradition had composers. The Ramayana was composed by Valmiki, regarded as the first poet or kavi. The word kavi has a secondary meaning as poet or rhymer. The primary meaning of kavi is someone who is wise. And in that sense, the composer of the Mahabharata was no less wise. This was Vedavyasa or Vyasadeva. He was so named because he classified (vyasa) the Vedas. Vedavyasa or Vyasadeva isn't a proper name. It is a title. Once in a while, in accordance with the needs of the era, the Vedas need to be classified. Each such person obtains the title and there have been twenty-eight Vyasadevas so far.

Consequently, the Mahabharata is far more unstructured than the Ramayana. The major sections of the Ramayana are known as kandas and one meaning of the word kanda is the stem or trunk of a tree, suggesting solidity. The major sections of the Mahabharata are known as paruas and while one meaning of the word parva is limb or member or joint, in its nuance there is greater fluidity in the word parva than in kanda.

The Vyasadeva we are concerned with had a proper name of Krishna Dvaipayana. He was born on an island (dvipa). That explains the Dvaipayana part of the name. He was dark. That explains the Krishna part of the name. (It wasn't only the incarnation of Vishnu who had the name of Krishna.) Krishna Dvaipayana Vedavyasa was also related to the protagonists of the Mahabharata story. To go back to the origins, the Ramayana is about the solar dynasty, while the Mahabharata is about the lunar dynasty. As is to be expected, the lunar dynasty begins with Soma (the moon) and goes down through Pururava (who married the famous apsara Urvashi), Nahusha and Yayati. Yayati became old, but wasn't ready to give up the pleasures of life. He asked his sons to temporarily loan him their youth. All but one refused. The ones who refused were cursed that they would never be kings, and this includes the Yadavas (descended from Yadu).

The one who agreed was Puru and the lunar dynasty continued through him. Puru's son Duhshanta was made famous by Kalidasa in the Duhshanta-Shakuntala story and their son was Bharata, contributing to the name of Bharatavarsha. Bharata's grandson was Kuru. We often tend to think of the Kouravas as the evil protagonists in the Mahabharata story and the Panda vas as the good protagonists. Since Kuru was a common ancestor, the appellation Kourava applies equally to Yudhishthira and his brothers and Duryodhana and his brothers. Kuru's grandson was Shantanu. Through Satyavati, Shantanu fathered Chitrangada and Vichitravirya. However, the sage Parashara had already fathered Krishna Dvaipayana through Satyavati. And Shantanu had already fathered Bhishma through Ganga. Dhritarasthra and Pandu were fathered on Vichitravirya's wives by Krishna Dvaipayana.

The story of the epic is also about these antecedents and consequents. The core Mahabharata story is known to every Indian and is normally understood as a dispute between the 'Kouravas (descended from Dhritarashtra) and the Pandavas (descended from Pandu). However, this is a distilled version, which really begins with Shantanu. The non-distilled version takes us to the roots of the genealogical tree and at several points along this tree we confront a problem with impotence/sterility/death, resulting in offspring through a surrogate father. Such sons were accepted in that day and age. Nor was this a lunar dynasty problem alone. In the Ramayana, Dasharatha of the solar dynasty also had an infertility problem, corrected through a sacrifice. To return to the genealogical tree, the Pandavas won the Kurukshetra war. However, their five sons through Droupadi were killed. So was Bhirna's son Ghatotkacha, fathered on Hidimba. As was Arjuna's son Abhimanyu, fathered on Subhadra. Abhimanyu's son Parikshit inherited the throne in Hastinapura, but was killed by a serpent. Parikshit's son was janamejaya.

Krishna Dvaipayana Vedavyasa's powers of composition were remarkable. Having classified the Vedas, he composed the Mahabharata in 100,000 shlokas or couplets. Today's Mahabharata text doesn't have that many shlokas, even if the Hari Vamsha (regarded as the epilogue to the Mahabharata) is included. One reaches around 90,000 shlokas. That too, is a gigantic number. (The Mahabharata is almost four times the size of the Ramayana and is longer than any other epic anywhere in the world.) For a count of 90,000 Sanskrit shlokas, we are talking about something in the neighbourhood of two million words. The text of the Mahabharata tells us that Krishna Dvaipayana finished this composition in three years. This doesn't necessarily mean that he composed 90,000 shlokas. The text also tells us that there are three versions to the Mahabharata. The original version was called lara and had 8,800 shlokas. This was expanded to 24,000 shlokas and called Bharata. Finally, it was expanded to 90,000 (or 100,000) shlokas and called Mahabharata. Krishna Dvaipayana didn't rest even after that. He composed the eighteen Maha Puranas, adding another 400,000 shlokas. Having composed the Mahabharata, he taught it to his disciple Vaishampayana. When Parikshit was killed by a serpent, janamejaya organized a snake- sacrifice to destroy the serpents. With all the sages assembled there, Vaishampayana turned up and the assembled sages wanted to know the story of the Mahabharata, as composed by Krishna Dvaipayana. Janamejaya also wanted to know why Parikshit had been killed by the serpent. That's the background against which the epic is recited. However, there is another round of recounting too. Much later, the sages assembled for a sacrifice in Naimisharanya and asked Lomaharshana (alternatively, Romaharshana) to recite what he had heard at]anamejaya's snake-sacrifice. Lomaharshana was a suta, the sutas being charioteers and bards or raconteurs. As the son of a suta, Lomaharshana is also referred to as Souti. But Souti or Lomaharshana aren't quite his proper names. His proper name is Ugrashrava. Souti refers to his birth. He owes the name Lomaharshana to the fact that the body-hair (lama or ramal stood up (harshana) on hearing his tales. Within the text therefore, two people are telling the tale. Sometimes it is Vaishampayana and sometimes it is Lomaharshana. Incidentally, the stories of the Puranas are recounted by Lomaharshana, without Vaishampayana intruding. Having composed the Puranas, Krishna Dvaipayana taught them to his disciple Lomaharshana. For what it is worth, there are scholars who have used statistical tests to try and identify the multiple authors of the Mahabharata.

As we are certain there were multiple authors rather than a single one, the question of when the Mahabharata was composed is somewhat pointless. It wasn't composed on a single date. It was composed over a span of more than 1000 years, perhaps between 800 BCE and 400 ACE. It is impossible to be more accurate than that. There is a difference between dating the composition and dating the incidents, such as the date of the Kurukshetra war. Dating the incidents is both subjective and controversial and irrelevant for the purposes of this translation. A timeline of 1000 years isn't short. But even then, the size of the corpus is nothing short of amazing. 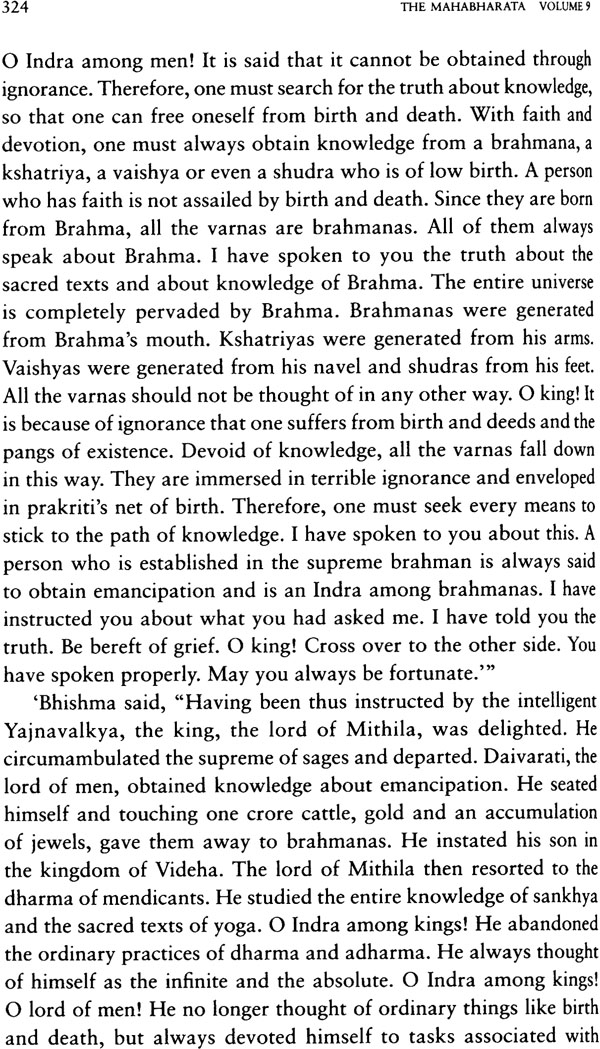 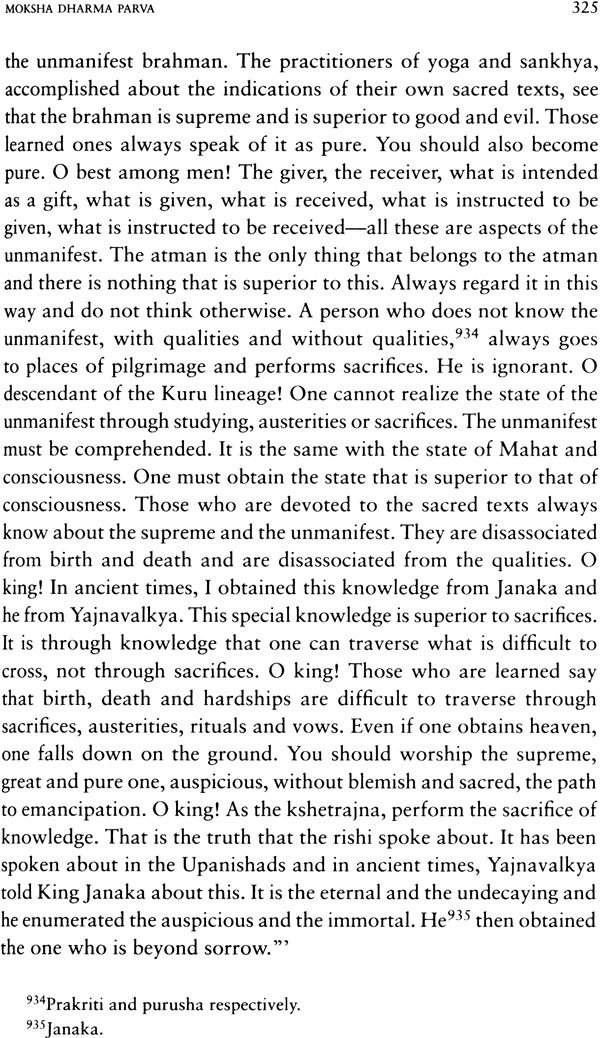 The Mahabharata (Volume 5)
By Bibek Debroy
$30
Out of Stock

The Mahabharata (Volume 6)
By Bibek Debroy
$30
Out of Stock