$20.00
Notify me when this item is available
Save to Wishlist Send as E-card Share by Email

This book contains English translations of 269 rubaies, chosen from tile works of 25 famous poets, chronologically arranged. It covers a wide spectrum of Urdu poetry, from Mir and Sauda in the 18th century to Josh and Firaq in the 20th century. The criterion for selection is the intrinsic quality of a quatrain, determined by the universality of its theme, the depth of poetic perception, and the dexterity of expression. The book presents a rich and varied poetic fare. Those interested in philosophical or mystical thought will enjoy reading the rubaies of Dard, Anees, Dabir, or Amjad; those looking for the poetry of love and romance should read the quatrains of Momin, Firaq and Josh; while those fond of social satire and moral instruction may turn to Akbar, Hali, and Mehroom.

While translating the rubaies the author has taken care to preserve the sense and spirit, as also the rhyming pattern of the original. The language used in translation is lucid, poetical, and appropriately expressive. Each rubai is first presented in Urdu calligraphics; this is followed, on the opposite page, by its English translation, which, in turn, is succeeded by the Romanized version of the Urdu text. The introductory essay on Urdu Rubai, discussing the origin, development, and potentialities of this form, is an added attraction of the book.

K.C. Kanda has been, till recently, a senior lecturer in English at Bhagat Singh College, University of Delhi. He holds M.A. degrees in English from the Universities of Panjab and Nottingham (U.K.), a Ph. D in English and a first class Master’s degree in Urdu from the University of Delhi. While English poetry has been his speciality professionally, Urdu poetry has been his love since his school days. He has made a deep study of Urdu poets, both ancient and modern, and is fully conversant with the subtleties of poetic art and thought.

Dr. Kanda has published a critical study of Tennyson’s poetry entitled The Two Worlds of Tennyson, and an Anthology of English Poems. He is the author of the bestseller, Masterpieces of Urdu Ghazal: From 17th to 20th Century (Sterling publication). He has also published articles 0’1 the poetry of Ghalib, Tennyson, and W.S. Blunt.

This book is a sequel to my earlier work, Masterpieces of Urdu Ghazal, published in 1990. The rubai, as most of us know, is a frequent companion to the ghazal, often used by poets and singers, at public symposia, as a prelude to their longer compositions. This poetic form is ideally suited to serve the twin purposes of delight and instruction. Because of its brevity, pointedness, and musicality, it makes an instant appeal to the reader’s mind and sinks deep into his memory. Urdu poetry contains a rich stock of rubaies, remarkable for the beauty and variety of their theme and style, deserving, as such, to be treasured and translated into a language which enjoys a much wider currency than Urdu. I have put together in the following pages 272 rubaies carefully selected from the works of 25 famous poets, covering a vast spectrum of Urdu poetry, from Mir and Sauda in the 18th century to Josh and Firaq in the 20th. The poets who have specialised in this genre, such as Anees, Dabir, Amjad, Josh and Firaq, are, appropriately, given a greater representation than their less distinguished compeers. In the case of such master-poets as Mir, Ghalib or Faiz, who are not exclusively the poets of this form, I have included, along with their rubaiyat, some of their qitaat, for a qita, though technically different from the rubai, vies with it in its total poetic effect. As the book is meant to cater to readers of all tastes, I have seen to it that the rubaies presented here possess a universality of appeal, by virtue of their content and style. Many of these, I am sure, are already familiar to the lovers of Urdu poetry.

While translating these quatrains I have taken care to preserve the sense and spirit of the original, though it may involve an occasional departure from the literal accuracy of the text. I have also adhered to the rhyming pattern of the rubai, but where a suitable rhyming word eluded my grasp, I haven’t hesitated to use assonance in place of rhyme. The language used for translation is, on the whole, lucid, rhythmical and adequately expressive, not only of the meaning, but also, as far as possible, of the melody of the original.

Paradoxical as it may seem, while there has been a perceptible increase in the popularity of Urdu poetry, be it the ghazal, or the rubai, there is a palpable decline in the number of those who can read and understand Urdu in the Persian script. For the benefit of those who would like to have a feel of the Urdu language without being conversant With the script, I have provided Romanized versions of the Urdu text. Each rubai is first given in the Urdu script. This is followed, on the opposite page, by its English translation, which, in turn, is succeeded by the Romanised version, in italics. I have also added an introductory essay which discusses the origin, development and potentialities of this form, and examines, with suitable illustrations, the salient characteristics of its renowned practitioners.

I am again grateful to Dr. J.S. Neki, who, as in the case of the Masterpieces of Urdu Ghazal, perused these pages with a loving care and made many useful suggestions. Dr. Neki is a rare combination of a poet and a scientist; he is a psychiatrist not only of the mind, but also of the heart and soul. Reading and revising these quatrains in his company has been a source of rare delight. I am beholden to Professor Gopi Chand Narang whose advice and encouragement have gone a long way in the successful completion of this work. His sound and scholarly judgement helped me in choosing the poets, and his personal library provided me with the necessary background information, used in the Introduction. Thanks are also due to Mr. Daleep Badal, a talented Urdu poet, who patiently read through these quatrains and suggested several improvements. For my source of original material, I have drawn mainly on the Delhi University Library (North Campus). I am lucky to include among my friends three officers of the library- Mr. M.L. Saini, Mr. N.A. Abbasi, and Mr. R.C. Chhiber- who are keenly interested in English and Urdu literature. I am extremely grateful to them for their willing counsel and cooperation. Further, I am grateful to Mr. Ali Siddiqui, Founder and Organizing Secretary of Aalami Urdu Conference, for allowing me to reproduce some of the pictures of the Urdu poets contained in the art gallery of “Urdu Morcha.” I must also express my sense of affectionate appreciation to my son, Dr. Arun Kanda, who, as before, carefully scanned the manuscript and corrected many typographical errors. Last, though by no means least, I am thankful to Mr. S.K. Ghai of Sterling Publishers who readily agreed to publish this book.

The rubai is a fascinating poetic form, compact in size, yet sufficiently capacious to give a telling aesthetic expression to the poet’s insights and experiences. Though not as popular nor as widely practised as the ghazal, the rubai is a frequent companion to the ghazal, often used by poets and singers as a prelude to their longer compositions for setting the tone and whetting the appetite of their audience. That the form has a strong appeal for the lovers of poetry was proved, long ago, by Edward Fitzgerald (1809-83), whose translation of The Rubaiyat of Omar Khayyam, published in 1859, had won uncommon acclaim from its Victorian readers. Fitzgerald’s version was instrumental in introducing the English-knowing readers to the form and flavour of the rubai, ensuring, in the process, its recognition as an important literary form.

The word rubai, like ghazal, is an Arabic word, derived from “rubaa”, or “arbaa” meaning “four”. In poetic parlance, the rubai is an independent quatrain, a four-lined stanza rhyming aaba. Each line of the quatrain conforms to a specific poetic measure called hazaj, consisting of four metrical units, represented in prosodic terms by the Persian notation: mufailun, mufailun, mufailun, mufailun; or by one of its twenty- four variants. The famous Arabic exclamation, “Lahaul willa qwatta ill billa,” represents, in a practical form, one of the accepted metres of the rubai, and is sometimes used as a ready-reckoner, a rough metrical yardstick, by students of prosody. Recognising the difficulty of transferring the complicated metre of the original into English, Fitzgerald is content to substitute for the Persian metre the five-foot iambic quatrain as exemplifed below:

Ah Love! could thou and I with Fate conspire

To grasp this sorry scheme of Things entire,

Would not we shatter it to bits-and then

Re-mould it nearer to the Heart’s desire!

Fitzgerald is, however, careful to preserve the rhyming pattern of the original, attempting thereby to recapture some of the Oriental melody. The four-lined stanza, rhyming aaba, is a novelty in English verse. English poets have frequently used the iambic quatrain, sometimes of the enclosed type, as in Tennyson’s In Memoriam, and sometimes with alternating rhyming pattern, as in Gray’s “An Elegy Written in a Country Churchyard”, but we rarely come across an iambic quatrain with the rhyme scheme of the rubai. The main strength of this quatrain resides in its last line, which, repeating the rhyme of the first two lines, clinches the issue with a final, finishing stroke. The first two lines introduce the topic and kindle the reader’s curiosity about the main drive of the poet. The third line, moving with a relatively easy pace, sharpens the edge of the reader’s curiosity and increases his suspense, so that the reader, like a swimmer about to make his plunge, awaits, with baited breath, the outcome of his poetic encounter the outcome which is emphatically conveyed in the quintessential fourth line. An Urdu poet, Hamid Hussain Qadiri has underscored the importance of the last line of the rubai with the aid of a sacred allusion. While paying a tribute to the unmatched glory of the Prophet, he has also placed the rubai’s concluding line on the highest pedestal. 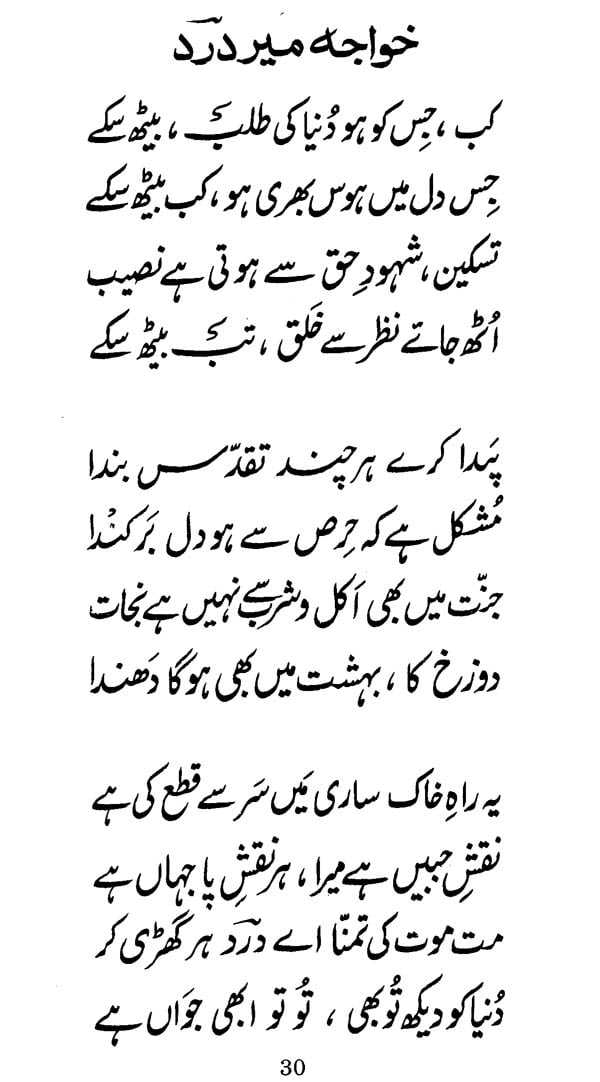 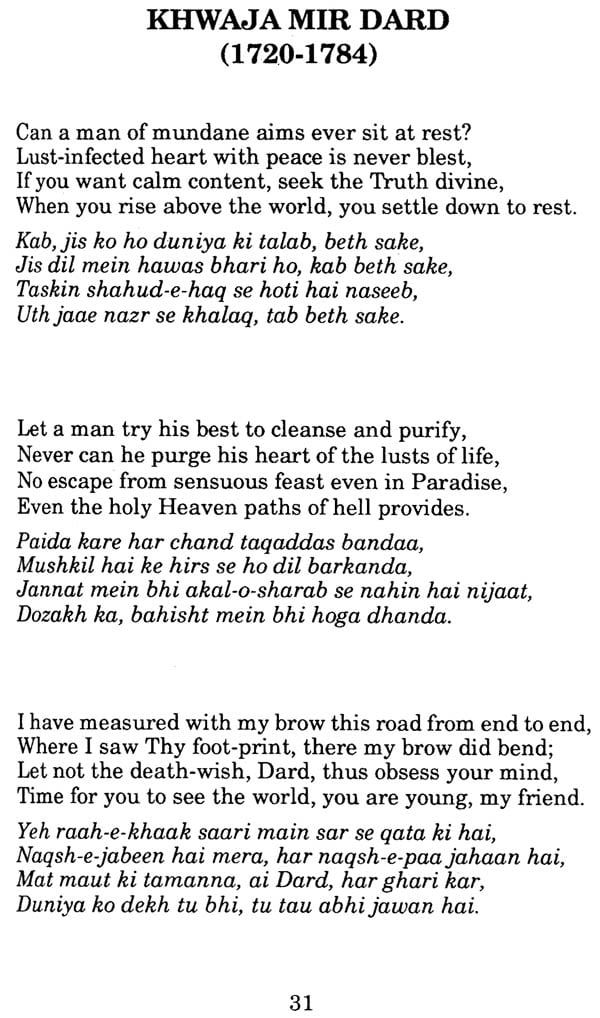 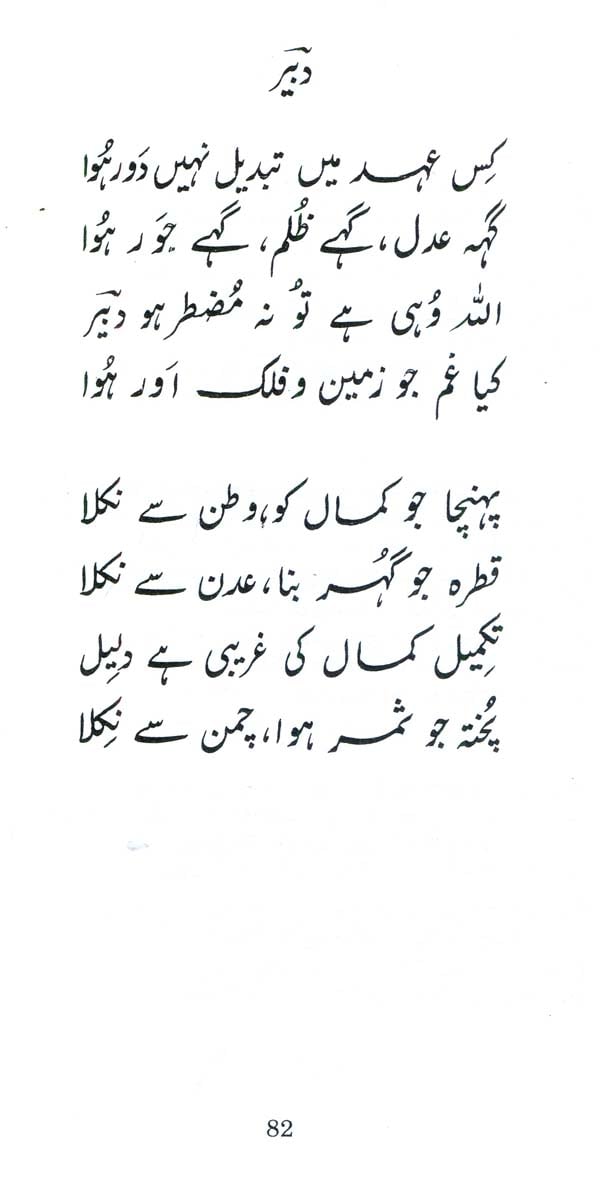 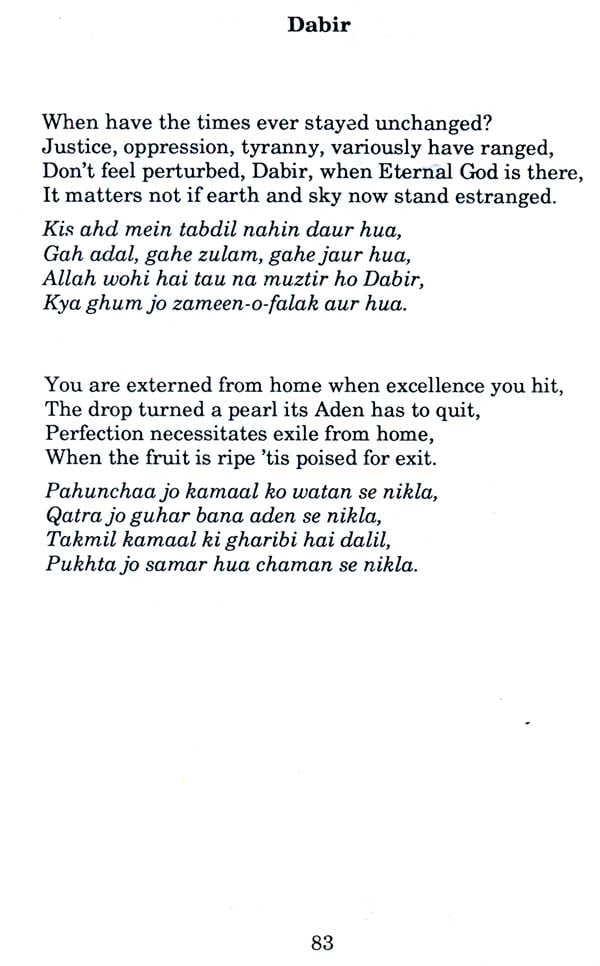 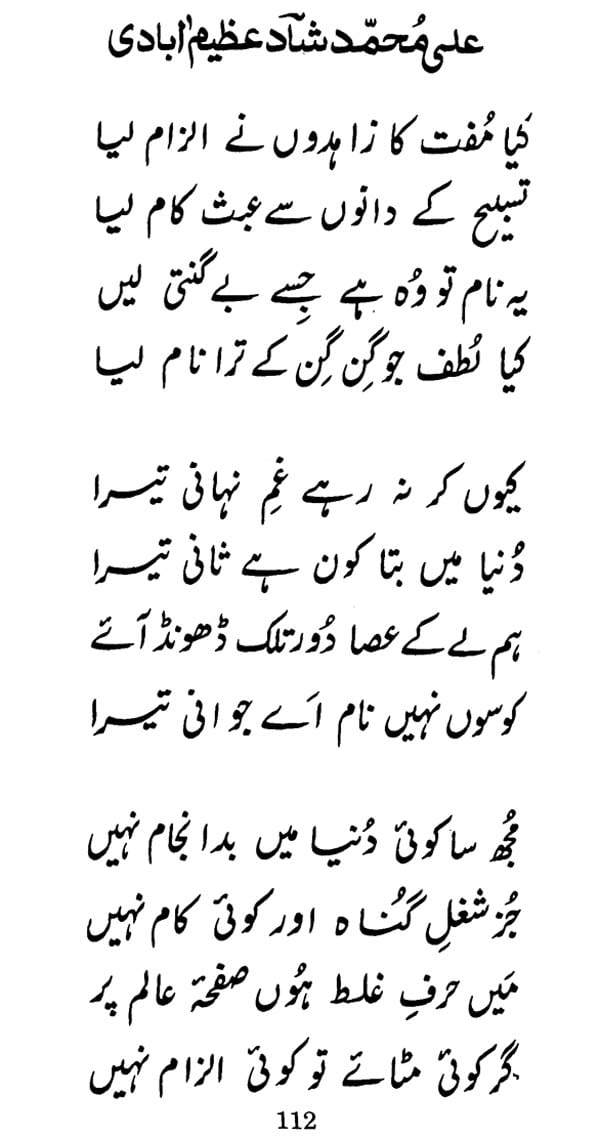 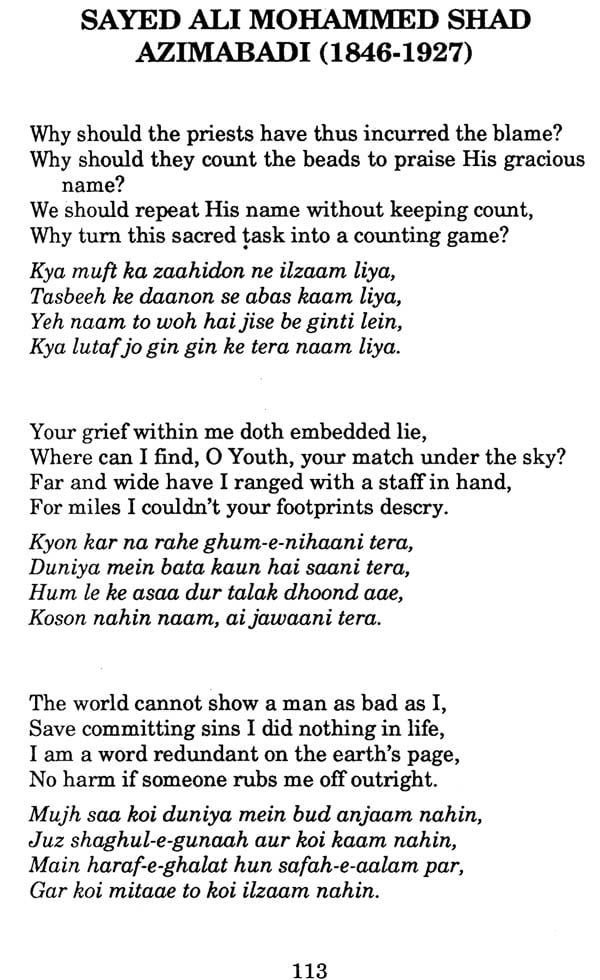 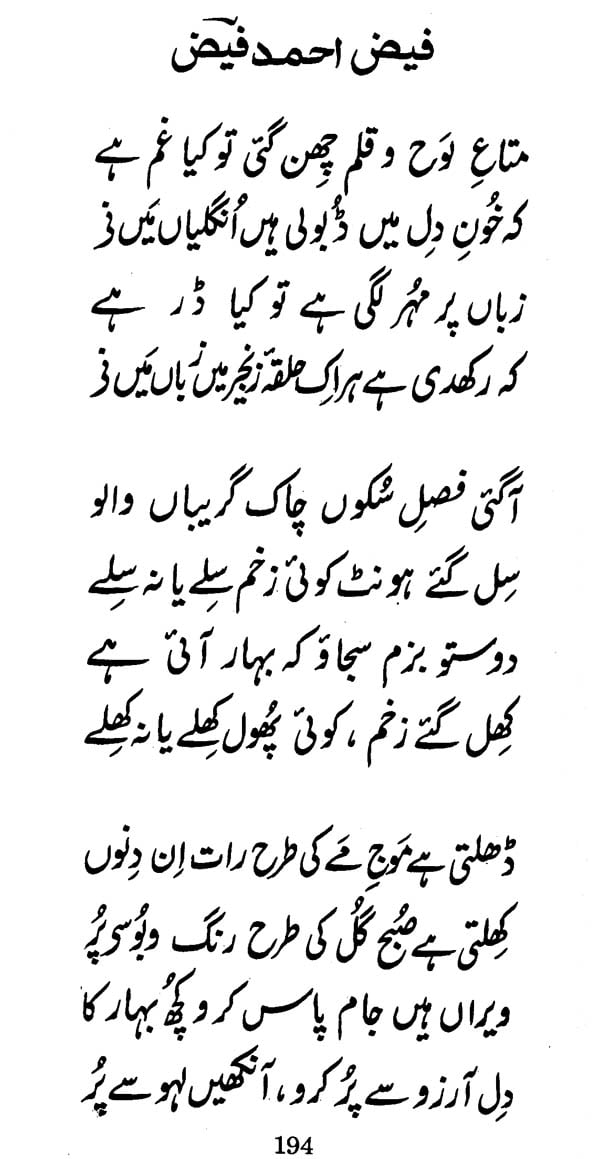 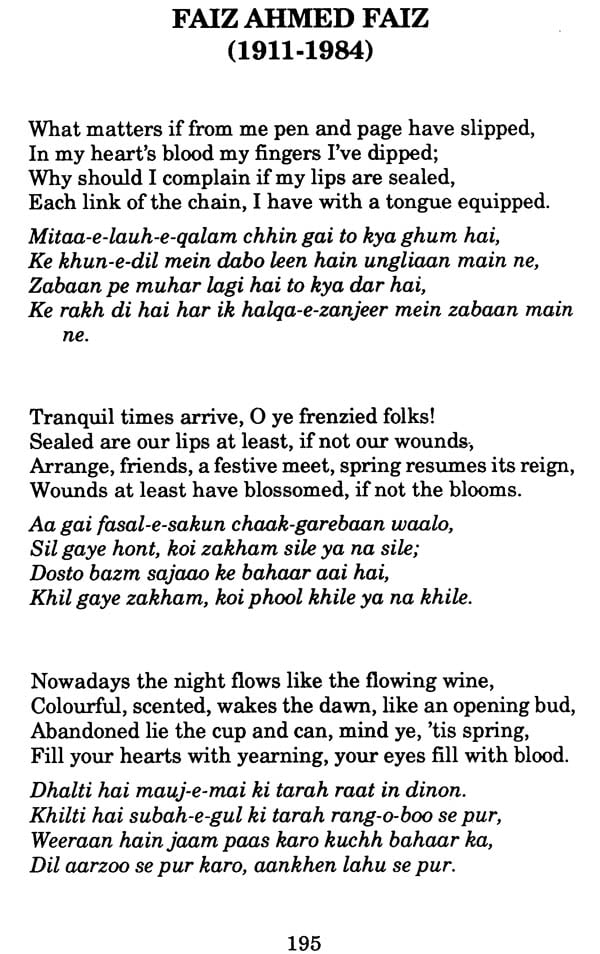 A Thousand Yearnings (A Book of Urdu Poetry and Prose)
By Ralph Russell
$29.00 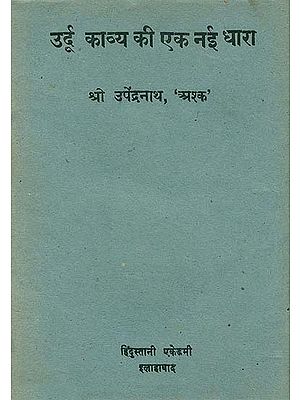 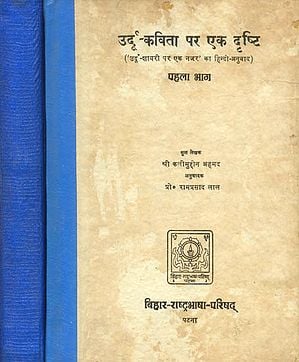 Celebrating the Best of Urdu Poetry
By Khushwant Singh and Kamna Prasad
$21.00 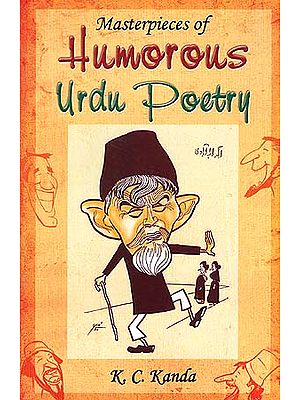 Masterpieces of Humorous Urdu Poetry
By Trans. By. K.C. Kanda
$29.00

Nets of Awareness Urdu Poetry and Its Critics
By Frances W. Pritchett
$24.50 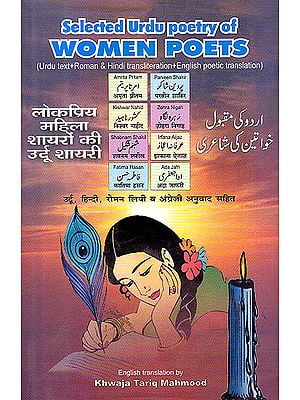 A Treasury Of Urdu Poetry (From Mir to Faiz) - Ghazals with English Renderings
By Kuldip Salil
$31.00 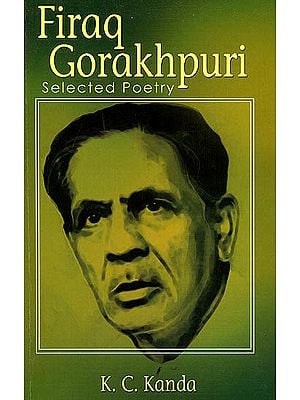