Etched in the mind of young Hsing Yun were remembrance of his Dharma brother Man Ch’eng, who imparted wisdom on a share of hardships that seemed more than he deserved in a singular utterance: “I am perfectly willing.”

Venerable Master Hsing Yun, in turn, recounts how the inherited acumen – and much, much more – helped position himself in the eye of clam amidst a cyclonic half-century of winds, frost, rains, and snow that were cause and conditions of one of the most illustration Buddhist monastics of our time.

Hsing Yun’s Hundred Saying Series comprises first person narratives of snippets from a legendary past, encounters along a perpetual odyssey, thoughts recaptured, and sentiments revisited. Perfectly willing is the first translated work in this series, originally in the Chinese language.

The sutra states: Merit from donating the seven treasures of the great chiliocosms of three kinds of thousands of chiliocosm will not equal that attained in upholding a four-line verse of wisdom.

What exactly does it mean? There will be the day, the Buddha is telling us, when the riches we donate are exhausted, but the donation of knowledge, skill, truth, and the Dharma treasure is limitless in use and withdrawal.

Sometimes a few words, like a four-line verse, would suffice to impact on an entire life.

I had seen Universal Gate magazine seeking readers’ submission of one-line verses of wisdom. I had also seen newspaper and periodicals featuring quotable quotes by illustrious characters. Without a doubt, whether it be a mere single-line could still be touched. Many a time I would feel the urge to share those few words with the greatest influence on me. However, after giving it a little more thought, I realized that, rather than conveying in my own words recollections of the past, I would really want to collect the many words of encouragement given me by those benevolent teachers and gracious acquaintances in my life. The book which resulted would be one way of showing my appreciation to these individuals. Such is the motivation behind Hsing Yun’s Hundred Saying Series.

Looking back into the past brings manifold emotions. I remember how, upon hearing Venerable Chih Feng utter the line: “Don’t become the withered bud or rotten seed of Buddhism!” I not only committed myself to the Bodhisattva mind, but also made my Bodhisattva vow; and how, upon hearing Venerable Master Chih K’ai say: “Spread the Dharma to benefit all living beings!” I never let myself forget the formidable responsibility toward humankind that I must shoulder or the mission that my master assigned me.

In my youth, I was once called an underachiever. That drove me to vow to live up to my potentials. Worse, I was deemed useless. But it spurred me on. There was never any doubt in my mind that I can always make up personal weaknesses by added diligence and become a person of worth!

In the days gone by, many encouraged and praised me, or slandered and criticized me. Be they out of kindness or otherwise, their words invariably all became positive causes and conditions along my path toward cultivation. They also formed the favorable and unfavorable – but facilitating – conditions enabling me to learn how to conduct myself in life.

As paddies produce crop of rice, and in mud thrives the immaculate lotus, the state of the objective environment is not nearly as important as our being a healthy seed. For only a good seed produces good fruit. One must allow the springs, summers, autumns, and winters, the winds, frosts, rains, and snows to become causes and conditions of one’s growth. Through all objective vicissitudes, we must never lose sight of growth and progress as our purpose in life. Today, I rejoice at being in possession of personal worthiness and virtue, affinity with many people, as well as correct perceptions and knowledge. For this I thank the Buddha’s benevolence and the kindly conditions from all ten directions.

In Hsing Yun’s Hundred Saying Series, I do not want to indulge in lofty eloquence or see any words and phrases wasted. I only want to contain snippets from my past and my thoughts in the one-line verse from which I have benefited greatly as a verification of the meaning of life. Sometimes I do not feel as if I entirely understand the circumstances in which I find myself. At other times, because of my advanced years and failing memory, remembrances of by gones are beginning to fade. It is those fervent devotees who, by asking to hear about my past, keep prodding me on. I am willing to leave them with some personal reminiscences. That is, while I am still able to speak and write of them. May those disciples who followed me into monasticism find among Hundred Saying some guidelines in life and inspirations for their future.

Starting in July 1992, I began contributing monthly to the Hundred Sayings column in Universal Gate magazine. The entire collection of Hundred Saying will probably take ten years in all. Completion of such an undertaking – a marathon in life – will have to depend on how long I am able to run, how far I am able to walk!

To date, sixteen pieces out of the hundred were written. To comply with everyone’s wishes, these shall go to press,1 while the rest will wait for another day.

Lastly, I would like to thank Global News Monthly and Universal Gate magazines for featuring these articles from Hundred Sayings, and Reverend from Man Kuo, a graduate in accounting from Fu Jen University and a graduate from Fo Kuang shan Buddhist College, for her help in recording my words. But most of all, I would like to convey my sincerest gratitude to the Triple Gems of all directions and the devotees preserving the Dharma without whose contributions Hsing Yun’s Hundred Saying would simply never be. 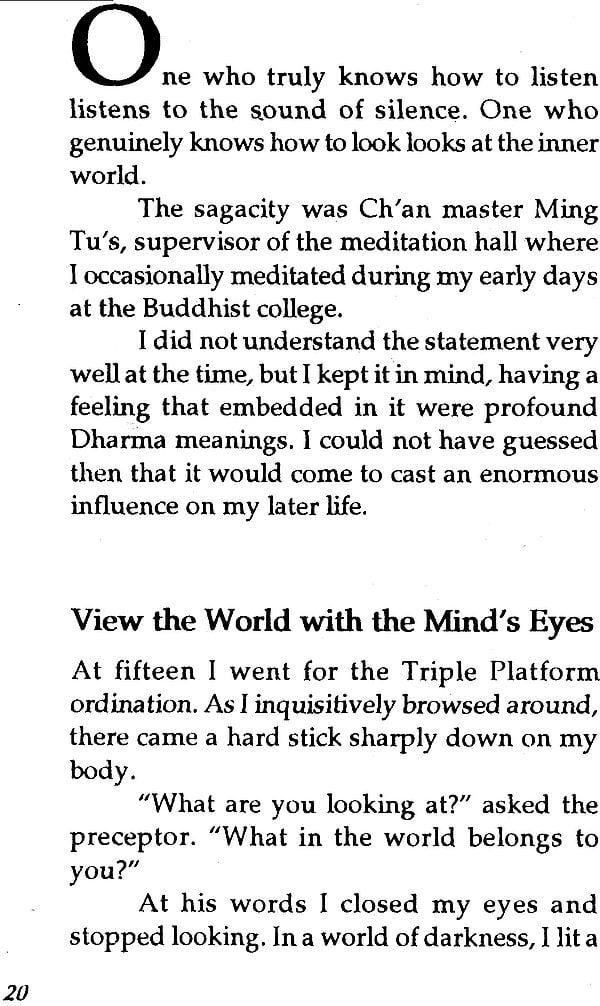 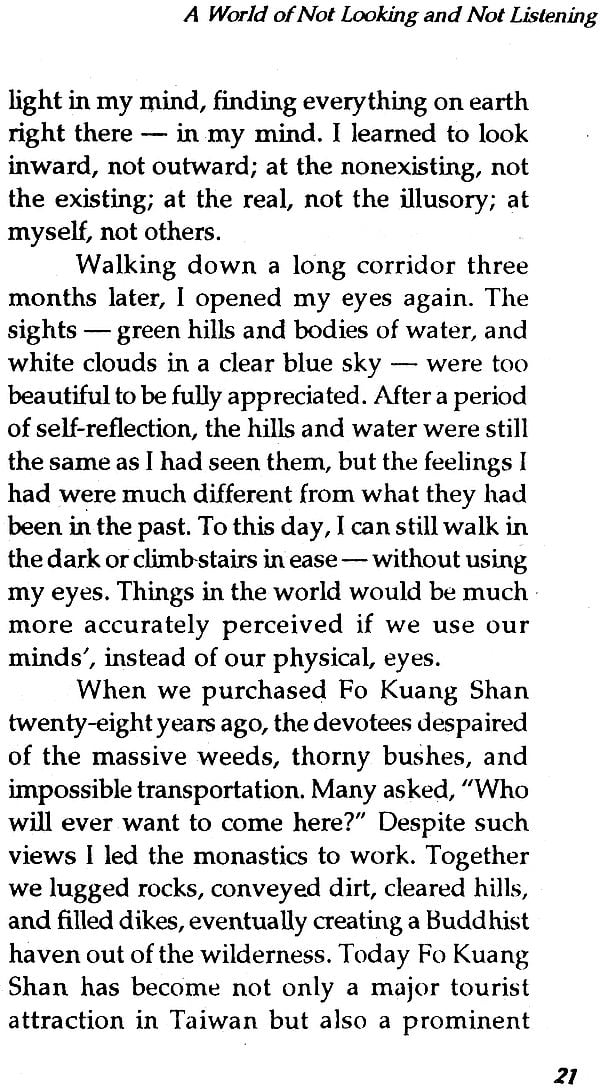 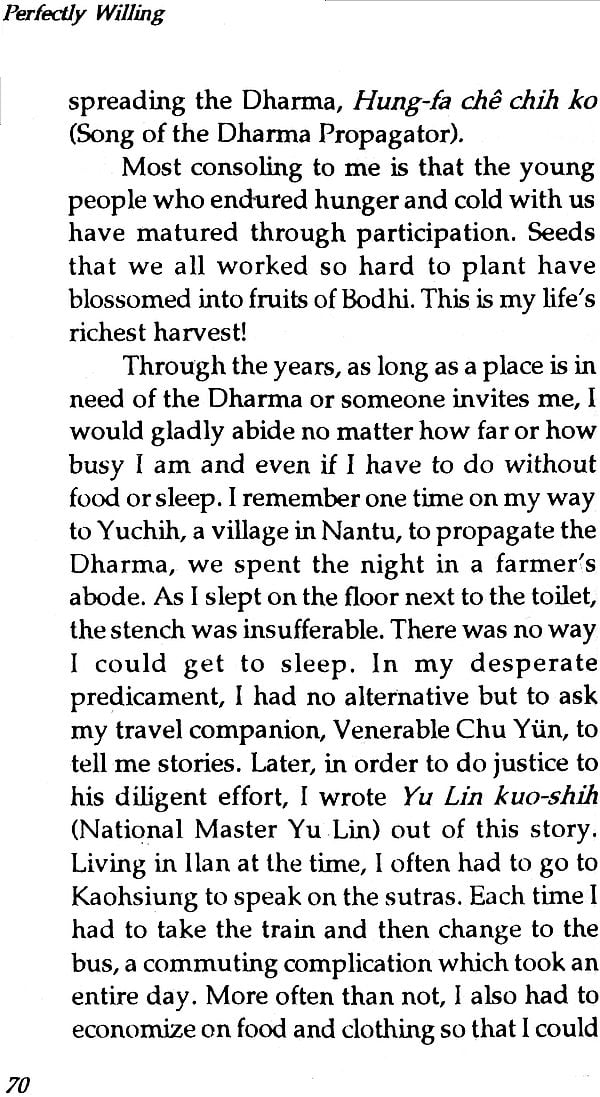 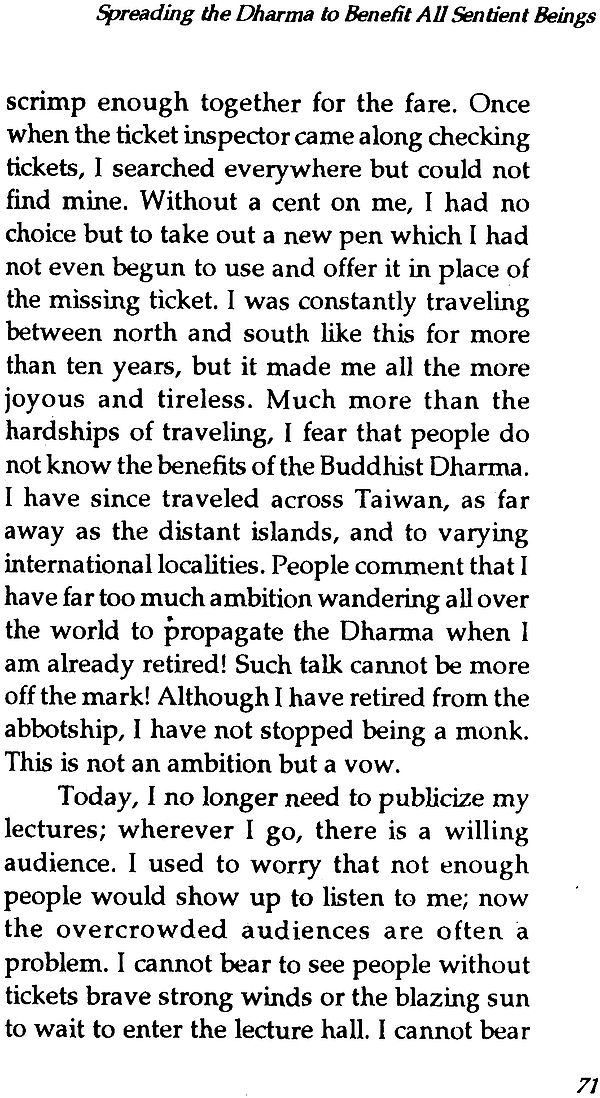 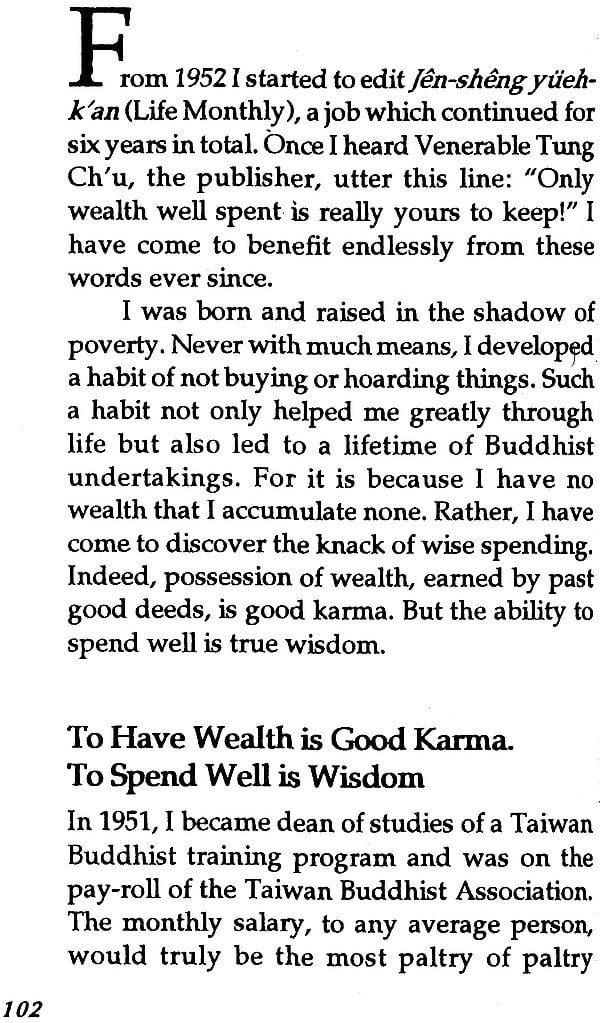 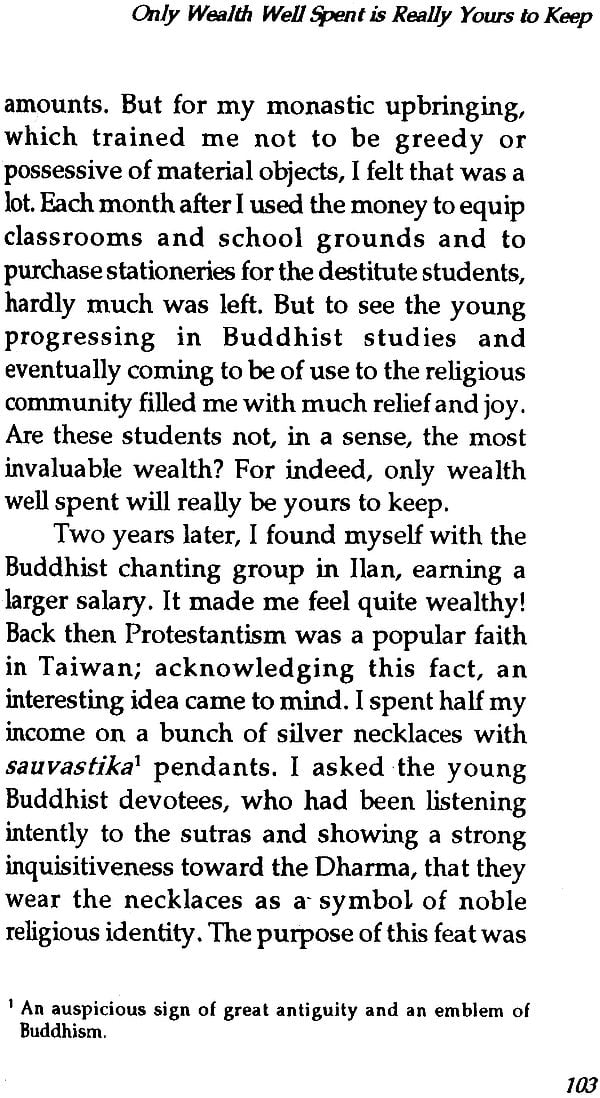 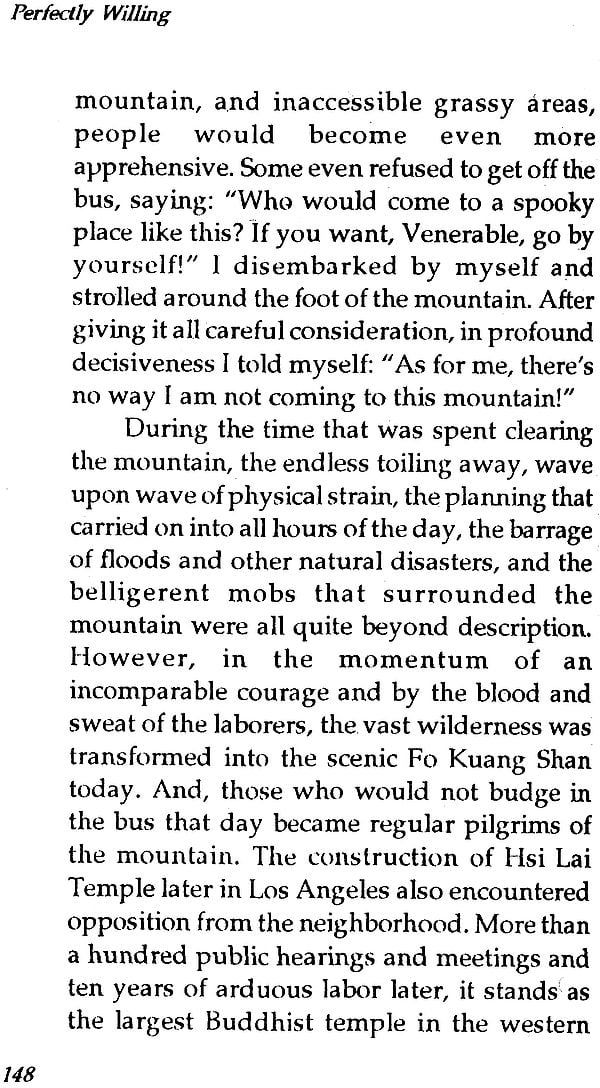 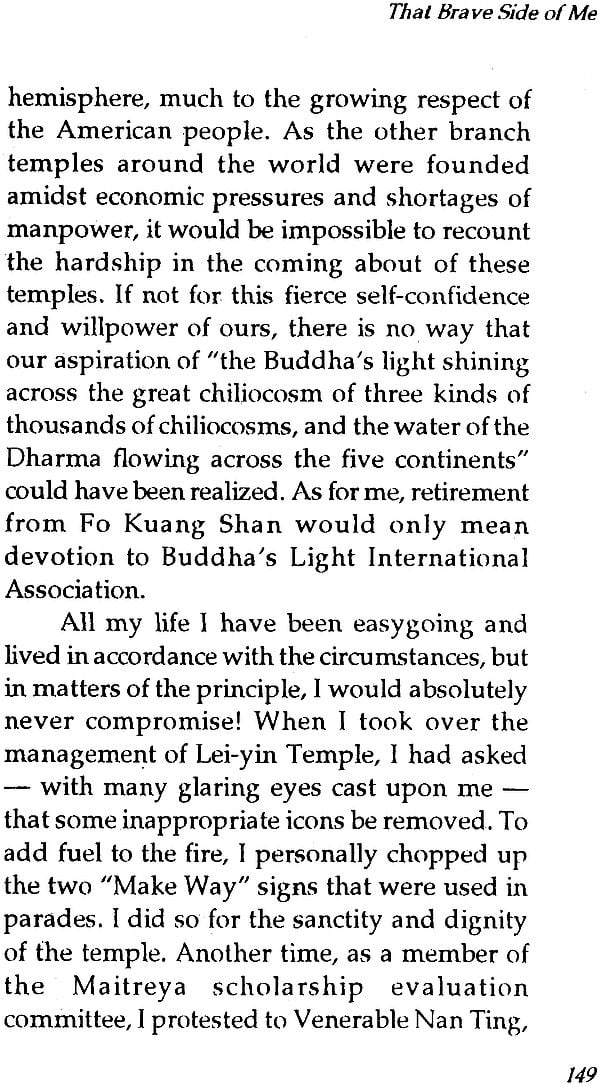 Let go, Move on (Between Ignorance and Enlightenment)
By Venerable Miao His and Cherry Lai
$22
FREE Delivery